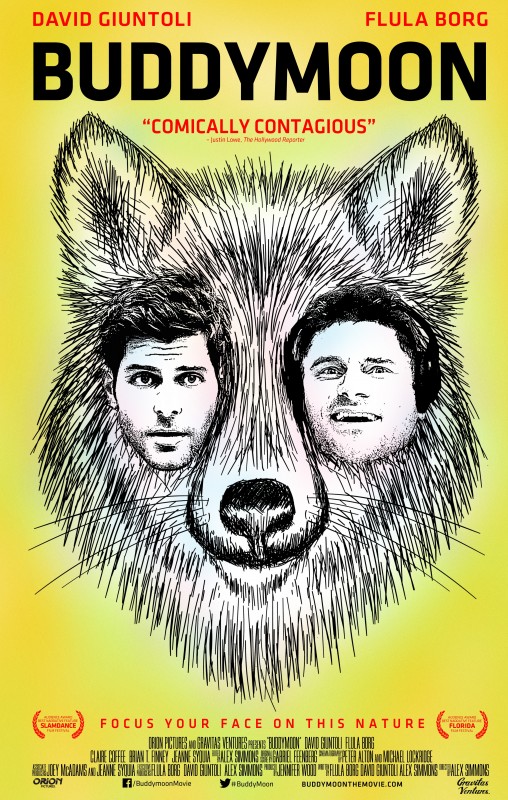 These days, most people who know David Giuntoli and Claire Coffee know them from their work on the awesome and harrowing fantasy show, Grimm. With their characters constantly facing death at the hands of Wesen, demons, and power-hungry humans, we don’t exactly get to see them go for laughs a whole lot. Thankfully, there’s Buddymoon, a comedy feature that comes out tomorrow that stars Giuntoli and Coffee alongside Flula Borg, Giuntoli’s real-life BFF.

Here’s the official synopsis for Buddymoon:

Giuntoli stars as “David,” who has been left by his fiancée days before the wedding. “Flula” (Flula Borg, Pitch Perfect 2), his eccentrically upbeat best man, insists that they go on David’s honeymoon together: a backpacking trip through Oregon’s scenic mountains. The pair crosses paths with a dazed conspiracy theorist, an attractive, charming backpacker (Coffee), and a bloodthirsty predator (an actual wolf) who all partake in a trek that tests their friendship – and their lives.

The film was directed by Alex Simmons, who is also a longtime friend of Giuntoli and Borg’s, and the three of them were roommates back in the day. Because of this, Buddymoon totally has the vibe of being a labor of love between friends and is a hilarious, sweet, and fun look at male friendship that isn’t drowned in toxic masculinity. It’s basically the anti-Hangover.

I had the chance to get on the phone with Giuntoli and Coffee to talk about Buddymoon, male friendships, and the state of independent films. 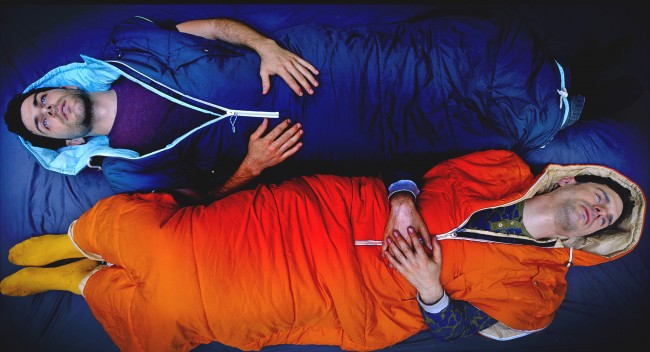 Teresa Jusino (TMS): I know that you [David], Flula, and Alex are longtime friends and former roommates. How much of this film is mined from your actual personalities versus what you make up for sheer comedic value?

David Giuntoli: Oh, it is made up for sheer comedic value. Flula in the movie is just a human, German exclamation point. In real life, he’s a man of extremes. He can go very high and…sometimes I won’t talk to him for days, and he’s just been like watching Frasier reruns in his house trying to figure out his life. So, a lot of it was comedic value. But when he’s up in the state that he’s was in the movie…that’s how it is in real life. He’ll do something ridiculous, I’ll deal with it…somehow. And we’ll move forward.

But our relationship, the three of us living together, all we wanted to do was make something together, either a TV show or a movie, but we never had the money to do it, or the industry know-how. Years later, when we all had jobs, we had no time. And we had this four-week window between seasons 3 and 4 of Grimm, to write and make a movie. And we did it! And Claire was kind enough to partake in our…

Claire Coffee: No, I was lucky enough to have been invited to partake. I can’t believe it was 3 and 4!

TMS: So, what was it that made you agree to be pulled into this madness? What was it about this experience that spoke to you?

Coffee: Well, on one level, I love David, so getting to work on this project…it’s just a really cool thing when someone can put resources behind an idea and take control. As actors, we have zero control for the most part. With David and Alex writing it, and just seeing it all happen…I always want to support stuff like that.

Additionally, getting to do something comedic is also very exciting.

Giuntoli: Grimm doesn’t exhibit the comedic chops of the cast. Nor should it…it’s called Grimm. But Claire, I think you did mostly comedy before Grimm. Like, that was your bread and butter right?

Coffee: Yeah. And I’d say too that the first big job you get sets the tone for how people define you, for better or worse. But I’d say that most everyone [on the Grimm cast] has some facility in both directions, comedic and dramatic. So it was fun to get to do.

TMS: Speaking to what Claire said about having control over the project and getting to do something independently…what I’ve noticed now, for film especially, we’ve tended toward tentpole movies, while indie films sort of get lost. Whereas television seems to have this Golden Age thing about it now, and a lot of chances are being taken on TV. What would each of you say about the importance of independent film, and how do you see it progressing right now?

Coffee: That’s an interesting question considering all of the television right now. Doing [Grimm] for five years, we’ve all been a little bit in the dark as to what’s happened. When we first got Grimm, the big explosion of Netflix and Hulu and Amazon hadn’t happened yet. So, I think the important thing about independent film now is that it’s kind of the only place where you can get something done from start to finish if you have the resources to finance it, and you’re writing it and all that. With television, some network has to buy it in order for people to see it. With independent film now, you can release it in so many different ways. So, I think the access…I’m not answering your question, I’m just….[laughs]

TMS: No, you are! I wanted your take on this whole thing. And I hadn’t thought about the fact that Grimm came out at a time when this was only just starting to happen.

Giuntoli: When you’re in Hollywood, or in related business, a truism at any time is always Oh my God, things are changing, everyone’s going to be out of a job forever. That’s been going on since Vaudeville and the Borscht Belt, and then there’s silent movies, and then audio comes into it and everyone throws a fit. And then TV is invented, and it’s a shit-fit, then color comes out… So, everything’s changed, but it really just shifts the model.

I think that independent films that are made for a couple of million dollars have trouble making their money back usually. And it’ll be something like This is an indie with Paul Giamatti and Robert Downey Jr. It’s like…that’s hard to do. What we did is that we really made a legit indie, and we found the model with the help of Gravitas Ventures to kind of do it, and sell it, and everyone’s happy. It doesn’t have to be a huge success. It can be a moderate success and make its money back.

And also, to what Claire was saying, making a TV show would be like trying to pass a bill in a democracy. Making an indie movie is like being the dictator, hopefully benevolent, and you just do it. You throw your resources at it, it’s your own money often, it was in this case, and you can just make the choice. You don’t have anybody else’s say. So, it’s a lot easier to do.

TMS: It’s interesting, too, that it is your own money. Because now we have things like crowdfunding. It’s weird that this is such an anomaly. I know it was $50,000 to make this, and it was pretty much the three of you just making it. Whereas I think lots of people would try to raise the millions by asking lots of people to chip in.

Coffee: When you’re asking for millions of dollars from other people, that pressure can be pretty stifling, I think. And the wonderful thing about having been on a television show for several years is that you can reinvest that money. For David, it showcases an entirely different side of him. And that, to me, regardless of whether it makes its money back — I mean, I’m sure that matters a lot more to David [laughs] – is that you made this thing that is awesome, and hilarious, and showcases an entirely different side of you. That’s remarkable.

Giuntoli: There’s also this whole thing, however true it is or not….I remember Zach Braff crowdfunded a movie, and I think he was unjustly criticized, but he was criticized, heavily, because I think that people want you to put your own skin in the game if it’s your own passion project, certainly. And I think people will respond much more kindly if they know you did the whole thing by yourself. There’s a perception out there, however true it is (and it’s not), that if you’ve been on a TV show, you have gobs of money. And it really depends on the person. And so, people aren’t going to want to give you money. If anything, you should be giving them money. I mean, give me money. I’ll take your money, anyone reading this. But it’s a little more risky.

TMS: Now one of the things that drew me to this movie in the first place is that I’m a sucker for bromances. Like, one of the things I love most about Grimm is the relationship between Nick and Monroe. Because a lot of the time, guys are taught that feelings are stupid and for girls, and you have to be all stoic or whatever. I love that there’s this comedic view of these two friends…on a honeymoon! I’d love to hear what you think the film says about male friendships.

Giuntoli: I was raised in a family of three sisters and no brothers, so the whole idea of men understanding feelings as an anomaly, that’s foreign to me. So, my guy friendships are generally emotionally supportive. If anything, I’ve had to learn the other way to do it, because you do need to “bro out” from time to time. I think that one of the nice things about Buddymoon is that it’s kind of sweet without really trying to be sweet. A lot of people remark on how sweet, and how kind it is. And we didn’t think we were making that, it’s just kind of our predisposition, I think.

I think it’s really fun to watch these two guys support each other and love each other without constantly commenting on how they’re not gay…even though we do that a couple of times. Because apparently, you can’t be friends with a guy these days without people calling it a ‘bromance.’ When did that happen?

Buddymoon hits select theaters tomorrow, as well as VOD on all platforms.