Interview: Dark Matter‘s Torri Higginson Talks S3 Renewal, Aging in Hollywood, and Why It’s Awesome to Be a Woman in Sci-Fi 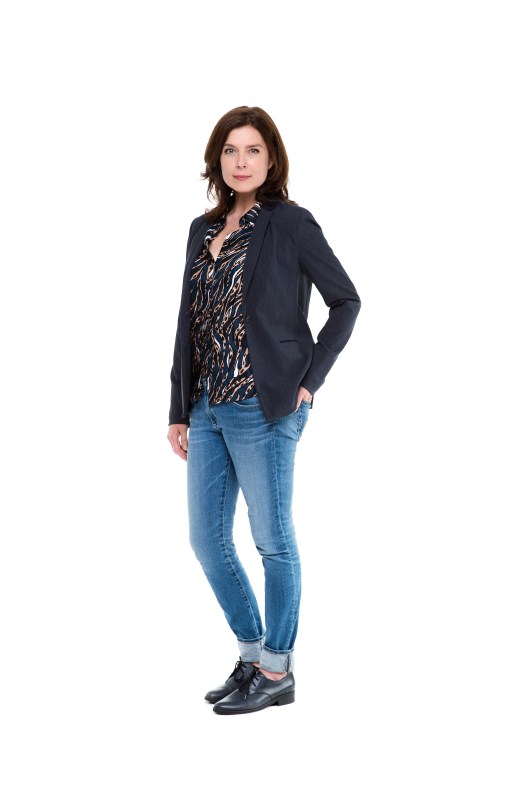 Dark Matter‘s Torri Higginson is quite a busy bee. Not only was Dark Matter renewed for a third season on SyFy (and her character, Commander Delaney Truffault, featured in and survived the Season 2 finale), but Higginson also stars on the CBC show, This Life, about a woman and her family dealing with her terminal cancer diagnosis. Somehow, she found time between those projects to shoot a supernatural web series called Inhuman Condition. I had the opportunity to speak with Higginson about her career, and the progress she thinks women are making in the entertainment industry.

Higginson believes that things are much better now when it comes to female roles than they ever have been before. However, that doesn’t necessarily translate to all women across all age ranges. Having performed roles in both sci-fi fare and straight drama, Higginson attests to the fact that it’s easier to go between genres when you’re an actress in your twenties. Less so for an actress in her forties and beyond. It’s then that sci-fi becomes a haven.

“When you get older, in the past especially, it has been harder to have a presence in a straight narrative,” she says. “I think sci-fi and genre stuff in general has been more open to the Female Commander of a Spaceship, so you can have a bit of age and a bit of gravitas for that.”

Higginson then talked about her personal experience as an actress getting older, and how she did initially go through a dry period, but that ultimately what saved her career was her decision to embrace her age, rather than try to cover it up:

“I hit forty a couple of years ago and stopped working. I went from having a working career — I always made a living doing this thing — and then I hit forty and stopped working to the point where I had to start thinking about what else I was gonna learn how to do. I’m kind of long in the tooth to learn a new career. What do I do? At one point I thought Should I do Botox? Should I change the way I look in order to get back in that world? And I’m really grateful I didn’t. I’m really grateful I got to the point where I said Well, that would no longer be me. I’d rather change careers than change myself. And I feel very grateful. Now, I’ve spent the past two years…I haven’t stopped working. And I probably look ten years older than a lot of people my age, especially in L.A.

I think that’s an interesting shift we’re having as a culture, too. We’re moving away from Dying and sickness is a failure. Youth is the place to be, and if you’re not youthful, you’ve failed, which is something our culture has embraced for the past twenty years, and I think we’re moving out of it. I hope, with all my heart.”

The big news for her sci-fi fans is that Dark Matter was renewed for Season 3, and she’s thrilled. But don’t ask her for any S3 tidbits, because she has none!

“Those guys are so tight-lipped,” Higginson laughs. “They were the same way on Stargate: Atlantis. They don’t tell you anything. And they kind of enjoy playing with you, too! But for me, I went onto that show and I thought I would have a 2-3 episode arc and then I was gonna get killed off, so I’m just amazed they keep calling me back! And I was amazed and thrilled and so excited to be in the season finale of Season 2, and I went That looks likely, that I’ll be back for Season Three! But right now, all I have is hope.”

Meanwhile, she’s working on another television project for the CBC called This Life, Season 2 of which premiered in Canada on October 2nd. In addition to playing a nuanced, flawed female character “of a certain age,” what really makes her proud of the show is how it has elevated women in all areas of the industry. She mentions that the CBC had a mandate for the show for 50-50 gender parity when it came to directors, so half the episodes are directed by men and half by women, which is awesome! Higginson also mentions the fact that in Montreal, where they shoot the show, there are many more women on film and TV crews than she’s seen anywhere else. So, the set of This Life is a very female-friendly space in which to work.

Inhuman Condition, a web series that premiered over the summer (check out the first ep above!) and can be found at Kinda TV on YouTube along with Carmilla, is described thusly: “In a world where the supernatural is known but scorned, werewolves, “walkers” and beings with supernatural afflictions attempt to live normal lives in human society. Many are closeted. Few are accepted. To help them fit in, and to navigate the problems in their lives, they come to Dr. Michelle Kessler (played by Higginson).”

She was thrilled to take on this “terrifying, and creatively compelling” series mostly because of BJ Lackie‘s writing, which impressed her especially because he was in his early twenties when he wrote it and was honing in on some rich themes. Higginson says, “There are really complex layers of characters, and complex observations of our society, and how we ostracize, and how we don’t, and that sense of belonging versus isolation and loneliness.”

She also took on Inhuman Condition, because she appreciates a good challenge. “It seemed mad to shoot,” she tells me. “We shot 35 episodes in five days, and fifty pages a day! And I thought That’s impossible, that’s absolutely impossible. Let’s do it!”

I asked her for her take on digital content, and how she views it both as an actor, and as a consumer. She tells me that when she first became an actor and went to theater school, she totally had that newly-minted actor snobbishness about anything that wasn’t theater acting. However, as she got older and did more work, she realized that film and television acting fed her theater acting, and vice versa. She now sees digital content as “another layer of that onion,” and really doesn’t distinguish between mediums anymore. “If you have a good story, that’s all you need,” she says. “We need more writers.” She pauses, then adds, “We need more women writers.”