Interview: PBS Digital’s Danielle Bainbridge Is Here to Teach You The Origin of Everything 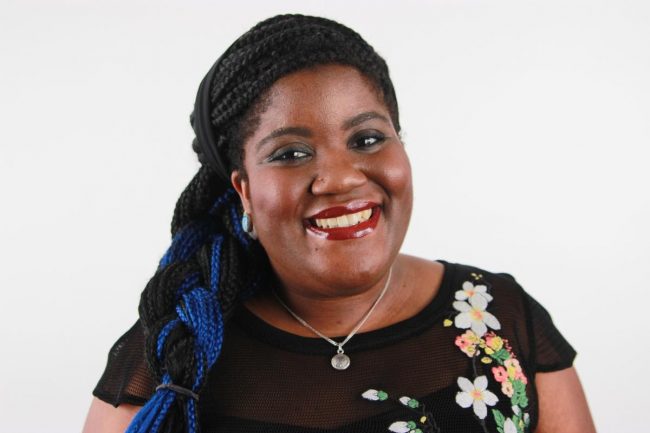 If you’re the kind of person who want to learn more about, well, everything, PBS Digital Studios has an amazing offering. The Origin of Everything is a digital series that’s exactly what’s advertised on the tin. Each short episode (they’re each about 10 minutes) delves deeply into one random topic that is of interest to the show’s host, the effervescent Danielle Bainbridge.

I had the chance to chat with Bainbridge about her love of learning, and what inspires her and gets her excited. Currently toward the end of her final year at Yale University, where she’s completing her PhD in African-American Studies and American Studies with a certificate in Women’s Gender and Sexuality Studies, Bainbridge had also been an English and Theater major at UPenn (Ivy League brain making me feel like a slacker over here!), and is also a writer of fiction.

Her interests are varied, and when she describes the way she learns, she says, “I’m that person that prefers when weddings have buffets as opposed to service dinners. Because at a buffet you can try a little of everything! But if they serve you dinner, you just have to eat chicken. You can only have one thing. And if you ask for more than one thing, the waiters look at you like you’re crazy.”

Likewise, her PhD contains the multitude of her interests, and she combines feminist study with the history of 19th Century African-American sideshow performers. “The first year I came to Yale,” she explains. “I decided to get a PhD, because I was interested in asking more long-term, bigger historical questions, but I didn’t have a clear sense of what I was going to do.” She then describes the moment that directed her course of study forever:

“It turned out that Yale happened to buy an archive of two women who were a set of conjoined twins, born in North Carolina in 1851 named Millie and Christine McKoy, and they toured the world as a sideshow act, a musical duet, and they were great performance virtuosos who were kind of under study. When I went to the archive for the first time, they had all this different material from the incredible African-American theater artists and literary figures on the table. Like there was stuff from James Baldwin and Richard Wright and whatever. And I looked down, and I saw this photograph of these two women. And it didn’t have much information except for their names and the year the photograph was taken. And it was probably the most uncanny feeling I’ve ever had that I looked at something and thought OK, I recognize them in some way. I don’t know why I thought that. I’m not related to them, obviously. I felt I recognized something in them and something in the photograph that was just so captivating: the way they stood, their beautiful costumes, the directness of their gaze. I thought, Let me look into this.”

This led her to a fascination with other black, disabled sideshow performers she discovered. Performers who were enslaved in the U.S, as well as those who continued on after emancipation. She learned that they were extremely popular big names in their day, and so was surprised that so few people know about them today. Even though there are other scholars researching these performers, Bainbridge wanted to throw her hat in the ring, and deliver their stories through her unique lens.

History has always been a fascination for her. Bainbridge hopes to transmit that love of history to those who watch The Origin of Everything, examining each topic like this: “OK, this is a conversation, these are the questions, this is the stuff that we’re gonna look at from all different perspectives, and what does it mean for us to look at the antithesis to something, not just the straight-forward answer?”

Since she’s so enthusiastic about learning, and we are The Mary Sue, I asked her what the word “geek” means to her, and what her history is with being a geek-type person. She replied,

“I guess I never use the word ‘geek’ to apply to myself. I just think of myself as, like, overly-enthusiastic about very specific things. I try to frame it that way, where I’m like There are always certain things that always make me excited. And I love people who are very expressive, who are very willing to take risks, who are not ashamed to say they’re into something, that they really want to dig into something. That it’s not about how you look, or how you appear to other people, but more about what’s interesting to you, what makes you excited, what makes you feel passionate.”

Bainbridge herself is certainly one of those people, and it’s her enthusiasm for learning, as well as the way she transmits that information to others was what inspired PBS Digital Studios producer Kornhaber Brown to approach her after having seen some work of hers online and ask her to audition for The Origin of Everything.

She received the call that she’d been chosen on her birthday (best birthday ever!), and she accepted the job, because she already loved the producers’ other work for PBS Digital Studios, and she relished the opportunity to teach in a way that wasn’t insular, academics talking to academics. She wanted to bring excitement about learning to everyone.

Once she completes her PhD, she’s looking forward to continuing to teach at the university level, as well as continue creating fictional work and, of course, more Origin of Everything.

“Those are the kinds of projects that motivate me,” Bainbridge says. “Things that have a direct impact on people, so I can connect with them in a really intense and emotional way, but also an intellectual way. Things that encourage empathy, that encourage people to think harder and be more critical and more compassionate, and to think of other stories outside of their own.”

Compassionate discourse is extremely important to Bainbridge, and she tries to model and nurture that behavior through Origin of Everything‘s social media platforms. If you visit the comments sections on the show’s YouTube page, Facebook, or Instagram, you’ll find that the comments are extremely thoughtful, even if they disagree. This is because Bainbridge actively participates and engages in thoughtful conversation herself.

“I think that’s great,” she says. “Even when people disagree with the content of the video, I like to leave it up and respond to them. Just because I think that sometimes discourse, especially the state of discourse that we’re in right now, it feels like people are getting increasingly brittle, and scared to voice any opinion, because they’re afraid that others aren’t going to receive them well, or even kindly. Even amongst people who have the same opinion…I’ll sometimes be in a class with students who agree with each other, and they’ll still be afraid to say something, because I just don’t want people to yell at me.”

Bainbridge definitely has an optimistic view of humanity, and says that “ultimately, history isn’t static, and human minds are incredibly elastic, and we have the capacity to learn and change and be different from each other.”

According to Bainbridge, you have topics like “Why do you get grades in school?” and “Why is there a North and South Korea?” to look forward to on Origin of Everything, as well as an episode on the myth of poison in children’s Halloween candy.

Bainbridge definitely has a gift for teaching, and her enthusiasm for learning and discovery is infectious. If you’re not already keeping up with The Origin of Everything, head on over to their YouTube page and catch up in time for their next weekly episode!