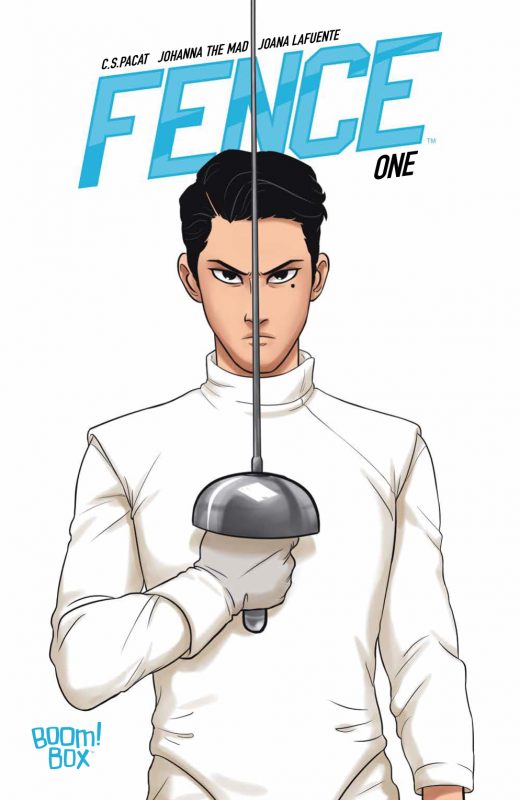 Art by Johanna the Mad

If you are one of our lovely TMS Subscribers, then you know that I’ve been doing a weekly comics recommendation list in our subscriber newsletter that specifically focuses on titles created by women, where either one or both the writer and the artist are female or non-binary. However, there’s a comic coming out called Fence that I wanted to share with the wider TMS community, not only because it fits that bill, but because it is a truly unique offering from BOOM! Studios.

Fence is a sports manga-like comic about competitive fencing. In the first issue, we meet Nicholas Cox, a competitive fencer who makes up for his lack of breeding and grooming with talent and ambition. However, as he approaches a big match, he’s up against Seiji Katayama, an undefeated legend in their division. The comic follows Nicholas through the match and leads the reader to wonder, among other things, what it truly takes to make it in an elite, competitive sport.

In addition to BOOM! providing a preview of the comic and its variant covers, which you can check out in the gallery above, I had the chance to speak with Fence‘s creators, writer C.S. Pacat and artist Johanna the Mad about what made them tell a story about fencing, the inspiration they each take from manga, and what they think sports and manga provide women.

For Pacat, telling a manga-inspired story about fencing comes from a very personal place. “I fenced épée all through high school,” she explains. “And I love the sport—it’s intensely strategic and psychological, a solo combat sport with a rich history. Fencing is also famous for its striking visuals, its silhouettes, and its arresting lines. It almost seems tailor-made for a comic.

“The idea for Fence started percolating when I got really into sports comics in Japan, where I lived for about five years. I love the intense rivalries, the striving, the way you can take characters to their breaking point. Haikyuu!! and Hikaru no Go are easily some of my favorite comics of all time.

“I was also really inspired by Ngozi Ukazu’s fantastic LGBT hockey webcomic, Check, Please! and the joyously queer Japanese animation Yuri!!! on Ice. I started to wonder, what happens when all those intense energies come out in a combat sport like fencing?”

For the Mexico-based artist, Johanna the Mad, Fence is her first printed comics work after finding popularity with her work online, which you can check out on her Instagram and her Tumblr. So how did she land such a sweet gig?

“I was actually contacted before by BOOM! Studios for a different project,” Johanna says. “Cat also knew my work and considered me as an option for the comic.”

When I asked her why she wanted to be a part of this title, Johanna replied, “I like to think of myself as a huge fan of sports manga and anime, so as soon as I was told about the plot of this story, I totally fell in love with Fence. Plus, fencing is a really amusing sport to me and I got excited to accept the challenge of working in something different than what my audience is used to seeing.”

A manga influence and aesthetic is palpable on every page of Fence. I asked Johanna what she thinks it is about manga that has always resonated specifically with women and girls, who tend to claim manga and anime very personally. She said, “Manga can be really inspiring. In my case, it has always made me feel like I can draw whatever I want as long as I put effort on it and work hard every day.

“What I believe draws female creators and audiences to manage the most are the amazing stories which can be about literally anything: from a superhero who’s bored because his fights end in a single punch, to humankind being almost annihilated by carnivorous giants. There are so many awesome worlds written in this format that I think there’s no way you won’t feel inspired to imagine or even create something of your own.”

Something that has always intrigued me about manga and anime is the tendency in even all-male casts and environments to deliver a very feminine sensibility. I asked Pacat about why she chose to set this story in an all-male environment, and she had this to say:

“As a genderqueer writer, I want to celebrate stories about characters across the gender spectrum.

“I think there are types of all-male spaces, particularly in sports, that can feel excluding, not just to women, but to LGBT+ folks, and even to some men who don’t conform to a certain image of masculinity.

“In Fence, I wanted to write a male sports team in a way that was less excluding, open it up, so that it was in some places exuberantly queer, for example, or was welcoming to different types of male expression.

“I would similarly love to see stories about female fencers, and female athletes across all sports. As others have remarked, one of the reasons we all love to watch the Olympics is that it is a rare break from sports programming that only shows men. I’d love for the whole genre to open up and diversify our idea of what it means to be an athletic hero.”

So what do these creators hope that readers take away from this comic? Says Johanna: “What I’m most excited about Fence is for people to connect with it the way Cat and I have. We adore the characters and even we get excited about what’s going to happen next in the story. I really care about the audience being able to identify with characters, so we’ve made sure everyone in the story has a unique personality, making this project so much fun.”

Pacat hopes that people come away inspired: “Fence is a story about friendship, and the value of people coming together to beat great odds. I hope people will come away inspired to take on their own challenges—and of course, filled with a love of fencing!”