Interview: Clea DuVall Talks About Her Directorial Debut With The Intervention

The Intervention is a relationship dramedy written and directed by Clea DuVall. In it, a weekend getaway for four couples takes a sharp turn when one of the couples discovers the entire trip was orchestrated to host an intervention on their marriage. The film stars Melanie Lynskey as Annie, the friend who orchestrates the intervention, and Cobie Smulders as Ruby, the friend in the troubled marriage. DuVall herself pulls triple duty, not only having written and directed the film, but playing the role of Jessie, the friend at whose family summer home the friends gather.

I had the chance to speak with DuVall about her experience as a first-time director, how her own process of self-awareness was responsible for this film, and why Cobie Smulders is the biggest trooper in show business.

Teresa Jusino (TMS): The first thing that struck me about The Intervention is that the characters reminded me of several of my friends. I’m not sure if that’s a good thing or not….

Clea DuVall: [laughs] Well, it’s a good thing in that, you know, I absolutely wanted to make a movie that was relatable. When you’re making a movie about relationships, you want it to feel authentic. It was my intention that people would watch it and be like Oh, that’s like Jane and Steve, or That’s like me. Everybody can relate to somebody.

TMS: Let’s go back to the beginning. Why the decision now to write and direct a film? What made you decide to take that leap at this point?

DuVall: I kinda set this goal in my mid-twenties that I would direct a film before I turned thirty. But, as it turns out, if you don’t do anything to achieve the goal…it won’t happen. [laughs] I think that it was something I knew I wanted, but something I don’t think I was at all ready for. And I started writing in my late twenties, and was teaching myself how to write scripts by writing them, giving them to people for notes, and learning structure and story that way. I did it really as an exercise for fun, and a creative outlet, and this was the first script that I wrote with the intention of getting it produced, but I didn’t want to direct it, because I wanted to be in it, and it seemed like too much to write and direct in my first thing.

Then, as time went on, I very lazily talked to people about coming on to direct it. I had an experience where I was working on a film, and I was put in a position where I needed to take on a lot more than actors normally take on, and I did so very willingly and I really enjoyed and was able to handle acting and the added roles that I was being given. That gave me the confidence to take this movie on and direct it myself.

TMS: And as far as this story, what inspired it, and what made you decide to tell this story now?

DuVall: Well, I am fascinated by relationships and human behavior. I was in a place in my life where I thought I knew what was best for everybody around me, and would spend a lot of time and energy sort of picking everybody apart. Not to their faces, of course, but with other friends, just talking about what I thought they should be doing.

Then I had this moment of self-awareness where it occurred to me that the more that I was looking at other people, the less I was looking at myself. And there were a lot of things in my own life that I needed to work on and work through. So, I turned my focus inward and did a lot of the work that I had been avoiding. And because humor is such a huge part of my life, and something that I appreciate so much, I thought about it in terms of a story. Like, how funny would it be if there were a person that was so convinced that they knew what was best for everybody else that they actually tried to put into action one of their insane plans.

TMS: Who do you identify with the most in this story? Where do you think the most “you” came out in this script?

DuVall: Each of the characters are different parts of me at different stages in my life, different kinds of relationships that I’ve been in. And the more self-aware I became, and the more I was able to look back at my life objectively and be honest with myself, I was able to create characters that felt more real using my own experiences.

So, I relate to all of them based on different stages of my life. But in this moment…well, Melanie called me out and said that I was an Annie. [laughs] Certainly, in terms of being controlling and obsessive, those are definitely things that I’ve struggled to tame within myself. But I think that I relate to where Sarah and Jessie end up at this stage in my life.

TMS: This being your first feature film, what did you do to prepare for this experience, and did you have any mentors that helped you out?

DuVall: Throughout the entire process, Rodrigo Garcia is a writer/director that I had worked with. I think I met him when I was 23 or 24, and he’s one of my favorite directors that I’ve worked with, and such a wonderful man. He read the script for me and gave me notes. And through the cut [of the film] gave me notes. He’s someone that I have a huge amount of love and respect for, and he was a huge, huge help.

To prepare for the film, the DP Pauline Morgan and I would have these marathon Skype sessions every Saturday for the month leading up to filming where we’d talk about the characters and the script and what I wanted it to look like, and she and I developing our own language. When we got onto the location, we scouted a lot, and talked through the scenes and shot-listed…we had so little time. We shot the movie in eighteen days, and we had to know where we were going.

It was keeping my head down and doing the work and being as prepared as I possibly could, while also knowing that no matter how much preparation you do, everything is gonna change every single day all day long. The feeling that we had enough a foundation that no matter what happened, we’d be able to go with the flow. And not getting bogged down in the self-doubt, just getting the work done…and trusting the cast and the crew. Everybody on the film was so talented, and really added so much, and made me look very good.

DuVall: Probably the latter question will have the longest answer. [laughs] I’ll start with what I would do differently next time. I would not be in the movie. I watch the movie, and I’m so happy I’m in it, and I’m really happy I did it the way that I did it, but I loved the days where I could just be the director and really be there for the cast and watch the scenes unfold. It was so exhilarating, and I loved it so much. I would love to be able to just do that and not have to worry about my performance, or myself in any way.

What I learned that I was pretty good at was managing the stress of the day. I was able to handle it, and I didn’t get overwhelmed. I could move forward, and I didn’t stall out. And I was surprised by how many technical ideas I had, because I think until you’re in the position where you have to figure out how to shoot a scene — as someone who didn’t go to film school and who’s just been on sets — I didn’t know if that would come to me organically, the technical side of being a director. And it was just there, and it was really fun. And having a DP who was really open and that I could ask questions really made that experience a lot less daunting.

TMS: I would imagine that with your experience on film sets, that it was kind of like film school for you in a way…

DuVall: Oh, for sure. Being on set is its own world. The clock is different, the language is different, the pace is different, and if you’re not used to that, I can imagine freaking out when things go wrong. Because they’re going to go wrong. Nothing is gonna happen the way you expect it to, and that’s the only thing you can expect.

We had so many things come up for us during production. Cobie broke her leg. Thunderstorms that would come up from out of nowhere that would keep us from shooting for a few hours. The power would go out, the plumbing would go out. There were so many things happening that we couldn’t have planned for, and we were put in this position of taking what we were given and making the most of it. 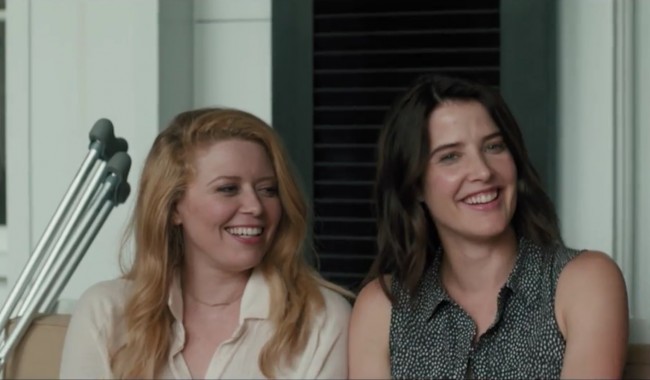 TMS: Wait, did you say that Cobie broke her leg? After she was cast? So, that wasn’t a part of your script?

DuVall: No! She broke her leg the night before coming to work. Broke her leg at night, she got on the plane the next morning, then was filming with us for the first time the next day. But she didn’t know her leg was broken until she got to Georgia [where The Intervention was shot].

TMS: So you had to quick on-the-fly make that a part of the story!

DuVall: Yeah! We had two choices when we found out her leg was broken. We could either pretend it didn’t happen and try to shoot around it, or use it as part of the story, because in life, if you break something or hurt yourself, you still go on and do everything you were gonna normally do. Especially for her character. She’s so stubborn, she’ll still play kickball. It really lent itself to the story so well, that I can’t imagine the movie without that having happened. Her breaking her leg is the best thing that could’ve happened. [laughs]

She’s such a trooper. She’s such a wonderful human being, and so much fun, and she never complains, and I adore her.

TMS: Have you given any thought to wanting to do this again?

DuVall: Absolutely. I’m figuring out what the next thing will be right now. There are a couple of scripts that I’ve written that I’d really love to make, and things I haven’t written yet that I want to do…it’s just a matter of figuring out what makes the most sense, and timing and all that. But I hope one of them comes together, because I really loved the experience, and I’d love to do it again sooner rather than later.

The Intervention is in theaters and on VOD TOMORROW.