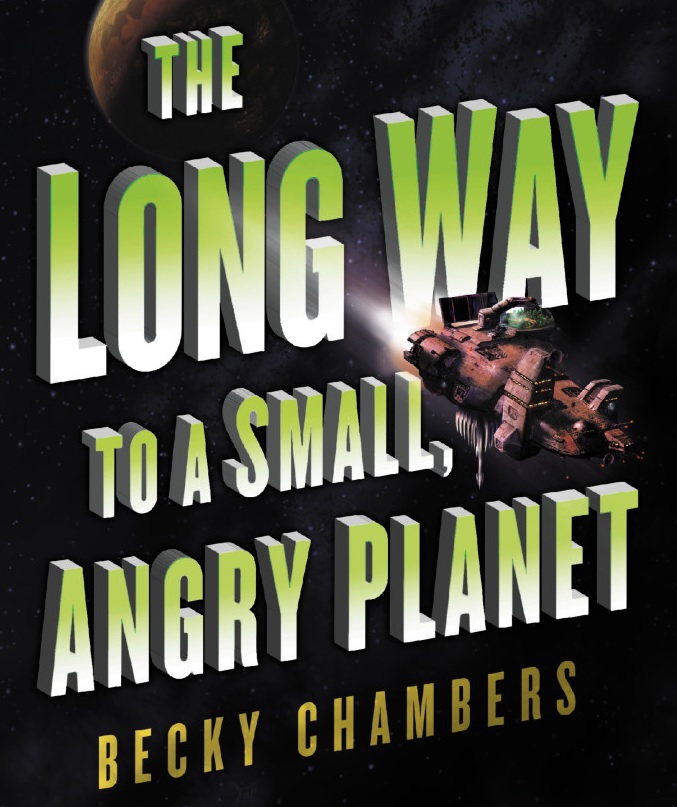 The Long Way to a Small, Angry Planet, the first novel by science fiction writer (and former Mary Sue staffer!) Becky Chambers, follows the crew of the Wayfarer, a wormhole construction ship, as they travel from one end of the galaxy to another. Though all very different, the nine members of the Wayfarer crew work together to ensure that their jobs run smoothly, and that they always arrive safely at their next port of call. We sat down with Becky to talk about writing the novel, subverting classic sci-fi storytelling, and creating futures we want to live in.

Alyssa Favreau (TMS): One of the most noticeable things is the sheer scope of the novel. You didn’t limit yourself to only a few alien races or planets or technologies, it’s a full world teeming with new concepts for the reader to explore. Was that something that was important to you, to have to have that focus on rich world building?

Becky Chambers: Yes, hugely. Our own planet has so many diverse cultures and different societies and different ideas floating around. I’m very much of the opinion that the galaxy at large, if there were other civilizations out there, would be equally diverse. I wanted to make that experience as rich as possible. I didn’t want there to be two or three other people hanging out out there, I wanted it to be a very vibrant, full place for the characters to explore.

TMS: Rosemary is a human and the Wayfarer’s newest crewmember, and she serves—in typical science fiction fashion—as our entry point into the story. But we don’t stay with her point of view for long, and that seems like a subversion of an established trope. Why did you choose to have different narrators?

BC: I think it’s more interesting, honestly. If you just stick with one character, you’re only getting their point of view, and reality is always subjective, always based on the views and experiences of the person looking out into it. Though I have my ideas about how the galaxy works, I wanted to see it through lots of different perspectives. I think that that, hopefully, creates a better place for the reader to make their own conclusions about the world this book is set in, because you’re getting so many different ideas about it, as opposed to just one person saying “here’s how it is because here’s how I see it.”

TMS: And even the humans are far less monolithic than I expected them to be. There’s the extreme pacifism of the Exodans, the xenophobia of the people who stayed on Earth. I feel like that’s not something we see in sci-fi very often. There’s often this one very individualistic, North American human perspective, and that’s it, that’s what humanity is.

BC: That was something I tried to do as well. I’m a huge fan of space operas in all flavors and incarnations but most of what I’ve interacted with is North American or British. It’s always bothered me that we go out into space and we see that Western society is the dominant paradigm, and well, no, there’d be lots of different things happening. We’re also talking so far in the future that Western society as we know it is no longer a thing, people are infinitely more defined by what planet or ship they grew up on, rather than what part of the Earth they came from. That made sense to me, that if we’re talking about something hundreds of years in the future, you’re not going to see the same societal divides that we have now. It would look totally different.

TMS: Another thing I enjoyed was the inclusion of queer romance as this very casual, normalized part of the world. And, unfortunately, that is still a novelty in the genre as well.

TMS: Every part of the story, from [ship AI] Lovey’s desire for a female body to Ohan’s spirituality, takes an established sci-fi concept, like the feminized android or the triumph of scientific progress over religion, and veers off in an unexpected direction. It seems like you had a lot of fun playing with these tropes, using them to write something very fresh and welcoming.

BC: I had a lot of fun playing with that stuff. I’m building on a lifetime of Star Trek and Star Wars and Farscape. These are all the things that inspired me to write science fiction in the first place, in addition to literature, so I came into this with a head full of tropes, asking “okay what can I tweak, what can I play with?” It was a blast; it was a lot of fun.

TMS: The story’s been compared to a lot of different spacefaring stories, like Firefly, but one of the biggest differences for me was that there was this joyfulness to the novel. Was that a conscious decision in terms of tone? Or was it just you having fun?

BC: The Firefly thing always cracks me up, because I hadn’t seen it when I first started writing the book. To me they’re very different stories; it’s difficult because I’m coming at it from a completely non-objective point of view. I guess they all have dinner together and their ship’s kind of crap, but beyond that, as far as the levity in it goes, that was something I did very intentionally. I love science fiction of all different types and tones, but there is a definite trend nowadays towards science fiction that is very heavy, if not pessimistic, in tone. It’s very somber, and it’s understandable. Storytelling is always reflective of the times in which we live, and we’re living in an era where we’re dealing with problems on a planetary scale. We’re dealing with messy, ugly social issues, and it’s a scary time in a lot of ways. I don’t think it’s any accident that a lot of the science fiction we’re seeing tends to be very near future, post-apocalyptic, or very grim in tone. We’re afraid of our future, we’re afraid of what’s going to happen next. I think that it’s important to have stories that reflect what we’re feeling right now, but it’s equally important to have stories that give us something to hope for. There’s no point to surviving if you’re not aiming for something better. That was what I aimed to do with this book. It deals with some tough stuff and there are references to a past Earth history that was challenging, but the present timeline is very much “but we got through it, and here’s why all of that struggle was worth it.” I wanted it to be a book that the reader felt comfortable in, enjoyed being in. A book that didn’t feel like a punch in the stomach, that made you want to be a part of that future.

TMS: On a similar note, another interesting aspect of this novel is the alternative forms of problem solving. One of the biggest conflicts in the story is resolved by filing the right paperwork, and it’s reflected in a conversation about the types of games developed by each species. The human games are all about conflict and competition, but humans as a group, at least on the Wayfarer, have clearly evolved passed that point. Is that also a part of your—while not quite utopian, certainly welcoming—future?

BC: Yes, spaces operas also tend to be military in flavor. Again, I like big ships and laser guns as much as anybody, but in terms of what our species could aspire to, I don’t see colonialism and territory disputes as inevitable. I don’t think that all problems must be solved with who has the biggest ships and the biggest guns. Sometimes that’s effective, but it’s a little more interesting finding different ways to talk about big concepts without resorting to physical violence.

TMS: It’s very clear that the characters are dealing with these big sci-fi concepts throughout the novel, but they’re dealing with it in little moments, in their interactions with one another as friends and coworkers. It’s almost domestic, and I found that refreshing, as you said, given the current landscape of the genre.

BC: I like putting it in that domestic context. That was another big thing for me, that space operas always focus on heroes. They focus on military heroes or some sort of sociopolitical heroes, your rebel heroes, and I love that, but I feel that that’s also a reflection of how our real world space programs have always been. We don’t see space as something that everyone can be a part of. During the early days of the space race you’re talking about test pilots, the military elite. Now we’re looking for something very different in astronauts, but it’s the intellectual elite. With the advent of space tourism, now it’s whether you have enough money. If you’re in the one percent you can go into space. We tend to see space as somewhere where the very best of us go. I wanted to create a setting in which space felt like a place for everybody. This is a story about the ordinary people living within an intergalactic society, the people who walk through the spaceport behind the heroes, who are normally not at the forefront of the story. That was my main driving force when writing this.

The US edition of The Long Way to a Small, Angry Planet is now available in bookstores.

Alyssa Favreau is a freelance writer and researcher working towards a Masters degree in English literature. She is based in Montreal, and lives at@alyssafavreau and unfridged.com on the internet.