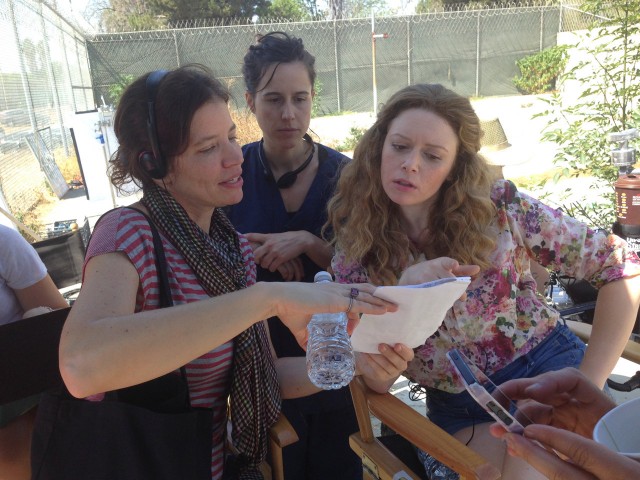 Out in limited release this weekend is the new comedy, Addicted to Fresno. We heard about the film on The Mary Sue thanks to an interview with producer Mynette Louie at Game Changer. The dark comedy about two sisters trying to get rid of the body of a dead man is a reunion between star Natasha Lyonne and director Jamie Babbit, who previously worked on But I’m a Cheerleader together. The busy Lyonne, most recently on TV in Orange is the New Black and the films Hello My Name Is Doris, and Sleeping with Other People, costars as the co-dependent sister of sex Addict Judy Greer (previously directed by Babbit on the show Married).

This is also the first collaboration for Babbit with her wife, first time screen writer Karey Dornetto (who has written on South Park, Community, Arrested Development, and Portlandia). I spoke with Babbit, Dornetto, and Lyonne about the film (although they can talk without much prompting).

Lesley Coffin (TMS): Did you write the part for Natasha, or was casting her a happy accident?

Natasha Lyonne: Did you really?

Dornetto: Yeah. I went back through my notes and literally wrote Natasha Lynne when I described the character.

Jamie Babbit: Even the character was originally named Natasha before she was named Martha

Lyonne: You are kidding me! How did I not know this! My agent would love this story!

Babbit: Well, we didn’t know if you would say yes, but when she was writing it, she needed to have someone in mind.

Lyonne: How would it come up that I would say no to you? What am I going to say? “You know Jamie, I have a lot of notes about making But I’m a Cheerleader with you. I know people enjoyed the movie, but for the life of me can’t figure out why.”

Babbit: But what if you weren’t available? But I think it just always helps writers to have an actor in mind.

Dornetto: Now that I know this, I’ll think of you for everything I write.

Lyonne: And now you know that I’m always available. Karey, thank you.

Lyonne: Hence, she’s a lesbian, but the fact that she’s a lesbian is pretty irrelevant to the plot of the movie. It isn’t the lead of the movie. It was written from her life. It’s in that spirit, which is why it is so easy and doesn’t feel out dated in this weird centerpiece way. And the sister is the fucking weirdo in this film, not my character. Mind you, Karey is a weirdo, but it has nothing to do with that.

Lyonne: I think Karey is such an interesting person. If you look at Karey, there is nothing dramatic to suggest that she is not a normal person. And yet, when you really get in there, this is a person capable of covering up a murder. And yet she seems so nice and smart, with the glasses and her sneakers and black jeans.

Babbit: But she would do anything to help her sister.

Lyonne: Push comes to shove, she’ll wheel a corpse around.

TMS: If written from such a personal place, why did you have Judy’s character narrate the beginning of the film?

Dornetto: Well, it’s a two-hander. It’s mostly Martha who has to change.

Lyonne: It’s interesting because Shannon is narrating, but it’s from a letter Martha wrote.

Dornetto: Yeah, it’s a letter Martha writes to Shannon, but it’s Shannon’s voice, because she’s the one reading it at that moment. It’s basically a co-dependent voice-over.

Lyonne: The idea of Karey’s point of view being important, is because in society, we are so used to the addict being the problematic figure. That is the reason we have so many programs and services for them. It’s always on the addict to get well. It’s like, “you bottomed out, it’s time to go on a big self-awareness trip and set some rules.” But when we first see Shannon, she’s like “I know I’m fucked up, I’m working on it.” Whereas Martha’s in denial and her problem is much more common in our daily life, and can be just as dangerous a disease. And can be so much more pervasive. It can be your mom or your boss or you boyfriend. It can affect how you order your coffee in the morning or how it prevents you from telling a taxi driver “there’s a lot of traffic, please go the other way.” Co-dependency is such a sick thing, and harder thing to gain self-awareness around. Because it’s so easy to be high functioning.

Babbit: And there are so many people who don’t even recognize co-dependency as a disease. And I do agree with Natasha. It’s a super fucked up disease that Karey’s family is just rolling in.

Lyonne: Most families are.

Babbit: I agree. My mom ran a rehab and both her parents were really bad addicts. So my mother’s life mission was to get everyone out of addiction and I’m product co-dependent childhood.

Lyonne: And she has her own sickness. It’s just so easy to say “this person is drunk and on the floor, she clearly has a problem.” But it’s a lot harder to ask someone “why are you so obsessed with it.”

Babbit: Meanwhile, your life is falling apart, while you’re focusing on someone else. Martha thinks it’s all about her sister and her problems, but the fact is, she’s a maid who lives in Fresno and has no relationship. She has people actively trying to be close to her, and she can’t even think of disconnecting from her sister. She’s going to be alone her whole life, and her sister is actually healthier than she is.

TMS: Because she isn’t co-dependent AT ALL.

Babbit: Right. She is just living her life, and she has hope of good things to come because she’s just looking out for herself.

TMS: Do you three have relationships with sisters you were able to draw from?

Dornetto: I’m the only one with a sister. And my sister isn’t as fucked up as Shannon. But I just thought what it would be like if I lived where my sister lives and what our relationship would be like. You do have to leave and have your own life, or you’ll fall into the same exact pattern.

Babbit: We actually just got back from our summer vacation with Karey’s sister, and just watching the two of them together is something to witness.

Dornetto: I did find myself falling into the pattern again. My sister showed up with about 7 bags at the beach, and I just immediately tried to carry them all. And like you said, about pushing a body around, I thought “I think I would help her do that.” Or, Jamie said “let’s go swimming” and I said “no, my sister could show up at any moment and I have to wait so she can see where we are and I can wave to her.”

Babbit: We were on the beach for half a day, and she wouldn’t go in the ocean because her sister “might” show up. By the way, her sister said she would be there at 9 am. She showed up around 1. So I had four hours of Karey waiting for her arrival and then taking her bags for her, so she doesn’t get mad for a second.

Dornetto: Yeah, that’s where all this came from.

TMS: Was Aubrey’s character based at all on your relationship with Jamie?

Babbit: Luckily, Karey’s sister is still in her hometown and Karey had moved away, so when I met Karey she was ready for love. So no. But I would say Aubrey is based on some people we know.

Dornetto: I had a friend into Kra Maga, so I thought it would be cool to have a character teaching that to Matha’s character.

Lyonne: And Aubrey really took to those classes.

Babbit: She’s very athletic. The hard thing for Aubrey was that she was still shooting Parks and Recreation when we were in production. So all her scenes were shot on Saturdays and Sundays. So she was literally working 7 days a week.