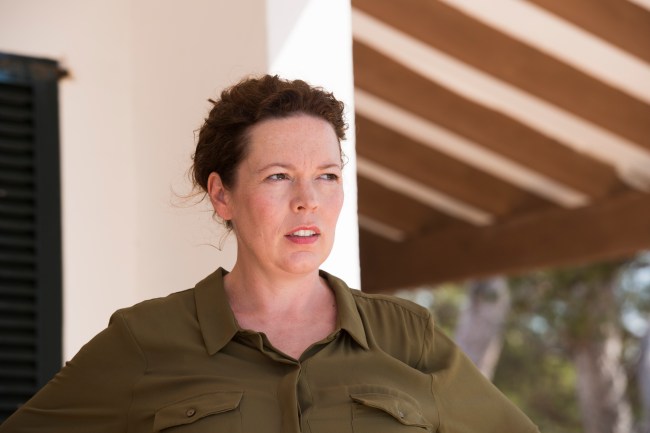 The talented actress Olivia Colman is as skilled at comedy as she is in drama, appearing in films as diverse as Hot Fuzz and Tyrannosaur. This year alone, she stars in the upcoming film The Lobster, the miniseries comedy Flowers (premiering this Friday), and is currently starring in AMC’s The Night Manager. As MI6 agent Angela Burr, she plays the handler for the undercover Jonathan Pine (Tom Hiddleston). Based on the novel by John le Carré, and directed by Susanne Bier, I spoke with Colman about changing Burr in the book, the joys of doing action, and importance of depicting violence accurately on screen.

Lesley Coffin (TMS): The book of course originally had your character written as a man, but the film changed Burr into a female. Did you know anything about Burr’s depiction in the book when you got the script?

Olivia Colman: I have to admit, I didn’t know the book at all. So the first time I met with Susanna my agent filled me in and told me, in the book the characters a man, now it’s a woman. So I went into my meeting aware of that, but when I met her I also had to say, “And I’m pregnant.” And to her and the producers credit they just said, “that’s cool” and there was no talk of hiding it or anything.

TMS: Did David Farr (the screenwriter) talk to you about what he added to the screenplay after finding out that you were pregnant? There isn’t a lot of dialogue about it but there are a few lines about this being her first child.

Colman: We never spoke about it, but I think we realized that not acknowledging it would have been a bit weird. So I thought it was the right way of addressing the circumstances. The baby would come out eventually and her life would change, but mainly she had a very important job to do and had to get this task done. She’s bringing a life into the world and didn’t want a world where Roper (Hugh Laurie’s character) has that much power. If anything, her being pregnant made it even more necessary for her to take him down. So I liked that he didn’t make a big deal.

TMS: And it’s interesting that although the character is based on a male character from the book, it isn’t something you’d realize unless you knew the book.

Colman: I liked the fact that the change was very direct and they didn’t make the gender switch a big deal. She’s everyone’s intellectual equal and had no time for class nonsense or the old boy’s-gentleman’s club thing. I think it was right that she seems completely comfortable in her own skin. She doesn’t feel the need to try use her feminine wiles in her job but she also isn’t trying to be as butch as all her colleagues. She was herself because she knows, she has right on her side. And that’s what the people who were dishonest found so threatening about her.

TMS: Susanne and I were talking about that idea of being right, because in the age of the anti-heroes dominating on TV, your character and Tom Hiddleston’s character just want to be good and do what’s right. And that’s kind of a refreshing, interesting thing to observe.

Colman: It’s so admirable to watch as an audience member because the line seems so fine, at any moment, they could just step over and have a very easy life. The good people in the world have to be so much stronger than the bad guys. That sense of integrity is fascinating. I loved playing Angela because she’s the type of person I’d like to be.

TMS: Some of my favorite scenes are the board room scenes where Angela holds her own with these slicker other agents who are so passive aggressive towards you. Those scenes just seem so fun to play and say so much about your work life. Did you have any favorite scenes?

Colman: I agree with you about those scenes because while they’re all talking, I’m just saying things with a look. I love playing those nuances. It’s fun to play a character thinking one thing and saying something else. Those were really fun. I also really enjoyed the more dangerous scenes I have a little later on. I rarely get to play a character holding a gun, and I was ashamed by how much I enjoyed doing that. I find guns absolutely abhorrent and there’s no place for them in the world. I know people have the attitude that if that person has a gun, I need a gun too. And I’d just rather no one have guns. But I’m ashamed to say, playing at it was really fun. Even stage bullets are loud, so they gave me silent bullets, because I didn’t want to make the baby jump. So filming that day must have looks ridiculous because I had to shoot silent bullets and they added the sound in later.

TMS: The show’s getting a lot of comparisons to the Bond movies. Did this movie make you want to do one of those bigger budget action films?

Colman: Oh yeah. Acting’s all playing so any chance to do something I’m not typically going to do in my normal life is really fun. That’s why I do it. I love my job because I get to be all sorts of different people. I think it would be very fun to be in one of those action films. Probably not jumping from roof to roof, because I don’t like heights, but running around would be fun.

TMS: It’s interesting that shows like this and The Lobster and the police characters you’ve played in things like Broadchurch and London Road, you seem to be playing a lot of characters in positions of power lately. Do you get the sense that casting directors see you that way?

Colman: I don’t think I’ve played more of those characters than most, although they are fun women to play. I’ve played all sorts of characters. But it’s interesting you’d mention that because some people think I only play women who are downtrodden or doormats, which I do take offense at that claim. When I did Tyrannosaur, she suffered domestic abuse, but that doesn’t make her weak. She’s an incredibly strong woman, and I find it troubling that someone could see that character as a weak woman. She was tortured every day and survived.

TMS: I’m so glad you mentioned that character because it is such a great movie that few people outside of the UK have probably seen. It’s a great movie, it’s just a really hard movie to watch.

Colman: I’m so glad you’ve seen it. It’s one of my favorite film I’ve ever made. And I love that character.

TMS: Susanne really wanted the series to feel very cinematic. Having done, did this feel more like doing a film than when you do television?

Colman: This was more like Broadchurch, which was 8 episodes. So they just have to schedule very carefully. A film with a big budget can take a long time to do one scene, which we couldn’t do. But we were filming for a long time, we were just packing more into that time. But I’ve also never been in a massive blockbuster that has the luxury of spending three days on one scene. I suspect I’d find that to be mind-numbingly boring. I like a slightly greater sense of urgency on set. But it was nice to tell the story in 6 hours, because that seems to fit the novel.

TMS: The series was the most expensive miniseries in the history of the BBC, but it’s also the most watched ever. Were you surprised when they started making those announcements about how successful it was? Were people talking to you about the show when it aired?

Colman: I’m a quite a hermit when I’m home, so I didn’t go out often. But my friends won’t watch something just because I’m in it, and many of them were watching and calling to ask what’s happened next week. And I’d never tell them. But I don’t look at social media, I’m a chicken and don’t like to read things about me that are mean. But I knew there was a buzz on there too. So that was very gratifying because I did it because I liked the script, and turned out other people liked it too.

TMS: You mention the gun dealing, which is such a huge topic right now in the news. The series looks so beautiful and has a glossy style, but doesn’t shy away from the serious elements about Roper’s arms dealing. Do you feel telling stories about these serious subjects as pop entertainment helps start the conversations about these newsworthy subjects?

Colman: What I find slightly depressing is when we just get used to guns and violence and blood in films, we get desensitize. I don’t want to give anything away, but the bit in the show they call The Fireworks, I find that level of violence so distasteful, but here it actually reminds the audience that you mustn’t get desensitized to all this. You have to be reminded of the violence, and it’s done in such a way, that it won’t let you forget. And that also reminds you that this charming man and his crew are awful people making money off of other people’s suffering. We always need to remember the damage guns cause and the fact that bad people make money selling them. I enjoyed playing at it, but I don’t want to live in a world where everyone has guns, and I don’t want my kids to have to live in that world either.