Intervention: The Panels and the Powerhouse Woman Behind the Unique Geek Convention

For most self-proclaimed geeks and nerds, attending conventions centered on their interests is an exhilarating experience. But, when faced with a myriad of fandom- and genre-specific options around the world, selecting the perfect con can be an arduous decision. Con guests want to feel like they’re getting the most “bang for their buck” as well as supporting an event that leaves them feeling reenergized.

Many people come out to cons for the sole purpose of having fun and meeting famous faces, but what about the entrepreneurial people who want both an enjoyable and educational convention? Is there a con for the starving artist who wants to develop a profitable business, the clever writer who wants to publish her intriguing saga, the DIY person looking for a cool new project, or the multi-talented creative who feels like she has lost her way? The solution is Intervention.

Intervention (a hybrid of “Internet” and “Convention”) held its first convention back in 2010. Founders Oni Hartstein and her husband James Harknell conceived the event to coincide with the rising popularity of social media, digital artistry, and podcasting/Internet radio. This month, Intervention celebrated its sixth year in Rockville, Maryland with a streamlined schedule of panels, children’s programming, and various entertainment options for hundreds of guests who came out for 3 days of informative panels and unadulterated fun. I attended Intervention for the first time (with a press pass) and it is a noteworthy convention for a couple of reasons.

One of the best reasons to support Intervention is the frontwoman of the show: Oni Hartstein. The die-hard Doctor Who fanatic, marketing pro, and webcomic creator gained a formidable following when she started her blog, Onezumiverse.com, several years ago. Her devoted readership loved her posts about her art endeavors, travel destinations, and peeks into her fascinating life as a creator so much that she was able to crowdfund the initial Intervention event.

Since then, she’s added yet another con, (Re)Generation Who, under her belt as well as countless interviews and speaking engagements. But, despite her success, she has decidedly remained grounded and in-tune with her followers and nerd culture. At this year’s event, the powerhouse CEO of Onezumi Events, Inc. was seen strolling down the halls, interacting with guests, and getting in on the action by displaying her own art as well as working as a panelist for several sessions.

One of her panels, “Staying Motivated,” was conducted with Thom and Kambrea from Shadowbinders and anime expert Liz Staley. The session was presented in a Q&A format and took place inside an intimate space as curious attendees sought advice from the successful panelists. As a con founder, many questions were directed toward Oni, including how she pushes herself through tough deadlines, how she deals with Internet trolls, her perception of failure, and the pitfalls of managing multiple projects.

Her responses were authentic and insightful: “Failures are the bricks you build your success out of … For me, webcomics were a brick in my overall foundation. It was a growth process [for me], and when it was time to let go, I accepted it and moved on to my next layer … Don’t take on too many projects and ruin your reputation in the process … Rewards are what help me push through the tough times. I give myself something big to look forward to!”

“I don’t have time to take anyone else down…why would I want to?” –@onezumi …exactly!! Stay busy being successful #Interventioncon — Tai Gooden (@taigooden) August 15, 2015

When somebody says something horrible to you, keep in mind that they don’t know YOU. They have the problem. –@onezumi #Interventioncon

.@onezumi closed the comments on her websites to block the trolls and she’s happier because of it #Interventioncon

The conversation took an emotional turn when Oni opened up about how she dealt with depression during a string of deaths in her inner circle. During the planning and launch of (Re)Generation Who in March 2015, Oni struggled to deal with tragedy in her life as she drew on the strength of her husband and friends. She revealed that a portion of her resilience stemmed from her difficult childhood. Abandoned by her parents as a child and raised by her grandfather until he died when she was only 12, Oni was a socially awkward geek who didn’t fit in with most of her peers. She said her life was set up to make her negative and bitter but she changed the narrative and used her life to build successful, inclusive conventions.

Not only did she make her event budget-friendly, but she also ensured that many of Intervention’s panels were either entirely led by or at least included women to provide expertise in technology, marketing, and more. Simply put, she’s the kind of woman and con founder that all geek women should want to support!

With a great visionary leading the way, Intervention’s programming was incredibly diverse and rich despite the con’s smaller size in comparison to mega-cons like SDCC. Intervention took over two small panel rooms and one large room with panels running in all of them simultaneously throughout the weekend. Programming options ranged from a series of beginner’s courses on copyrights, webcomics, songwriting, filmmaking, podcasting, and website setup (with co-founder James Harknell) to intensive workshops on how to create a web series, a business Q&A with a lawyer, and the coding complications behind designing a miniature robot.

Oni Hartstein ran a three-part “Real Talk Marketing” series on each day to discuss setting up an online business, generating/sustaining press, and building a network. Geek woman power was in full effect when Bree Rubin debuted her “Creeping Angel” (her take on Doctor Who adversary Weeping Angel) and Manga Studio 5 expert Liz Staley showed artists how to take their art into the digital realm. 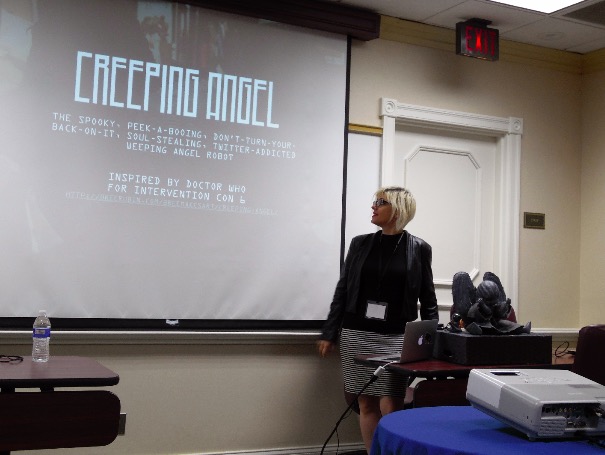 Writer Nicole Dieker also served as a public speaking panelist. Nicole started attending Intervention in 2010 as an occasional geek musician and, through her experience at the con, transitioned to a full-time freelance writing career.

Intervention 6 also included a daily session for artists and webcomics to bring their materials to an expert for review. For guests who wanted to attend more light-hearted events, Intervention provided a crash course on “Unique Geek Chic” as well as “Dating Tips for Nerds.” Like any great con, there was lots of cosplay, an expansive vendor area, gaming room, video room, and children’s programming for young geeks. With events lasting until after midnight on Friday and Saturday, guests enjoyed socializing at the Hilton Washington DC/Rockville during a “Drink and Draw” session or watching a geek bellydance performance by Antipode.

Intervention 6 ran efficiently throughout the weekend and was by all accounts a success. It is an inspiring event that every geek woman should add to her dream con list! Check out my compilation of photography, tweets, and video from Intervention 6: 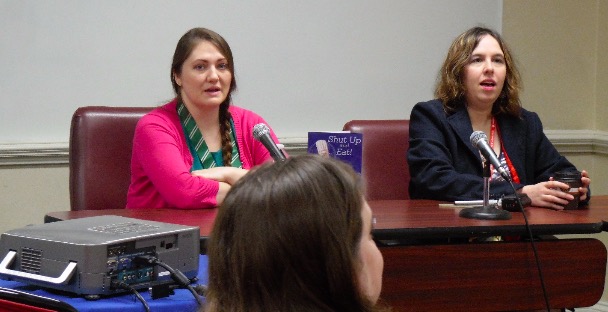 .@interventioncon Panel Room 1, 10 AM — @angalese and I teach you how to show off your own unique geek style no matter what the dress code! — Kara Dennison (@RubyCosmos) August 15, 2015

A lady walked into the con room and she looks like Amelia Pond in a Wonder Woman outfit!! #Interventioncon @interventioncon — Tai Gooden (@taigooden) August 15, 2015 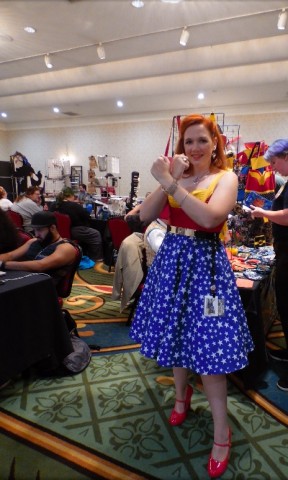 BenaeQuee Creations cosplay artist … Or, is it Amelia Pond?

Weeping Angels have babies too!! Be careful or your soul will go to @creepingangels!! #interventioncon http://t.co/LvWCXMQdcv 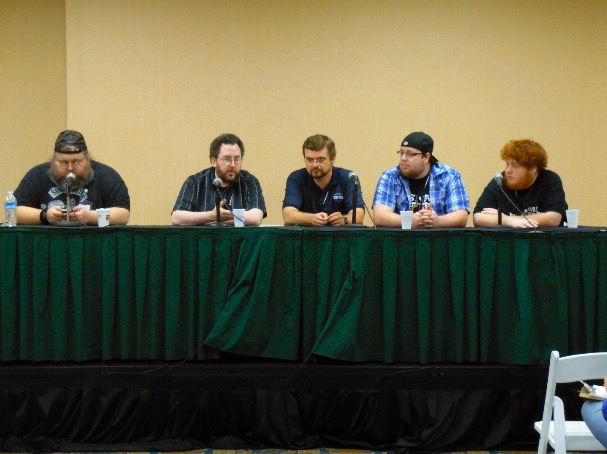 “If you are getting into podcasting to make money…you are doing it WRONG!” -Ben from @TauRadio #Interventioncon — Tai Gooden (@taigooden) August 15, 2015

But this can vary based on how often you podcast. It can be three hours if you only podcast once a month b/c there is lots of content 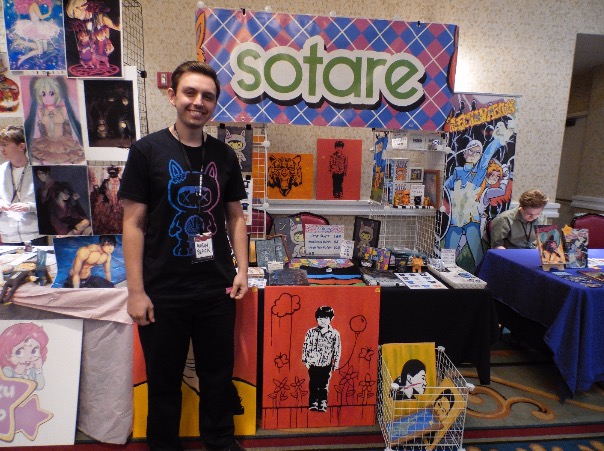 Adrian from Sotare snagged a vendor space for the first time! 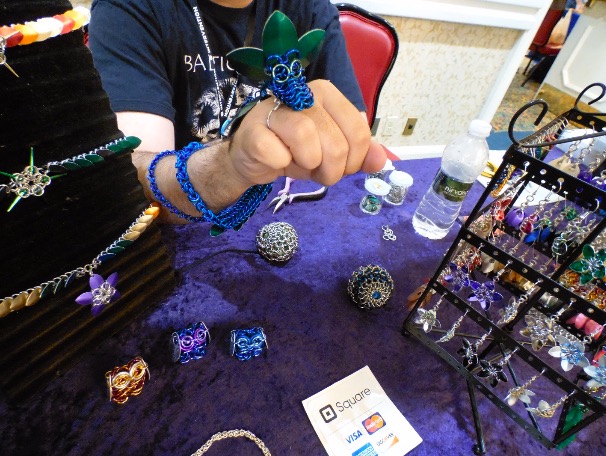 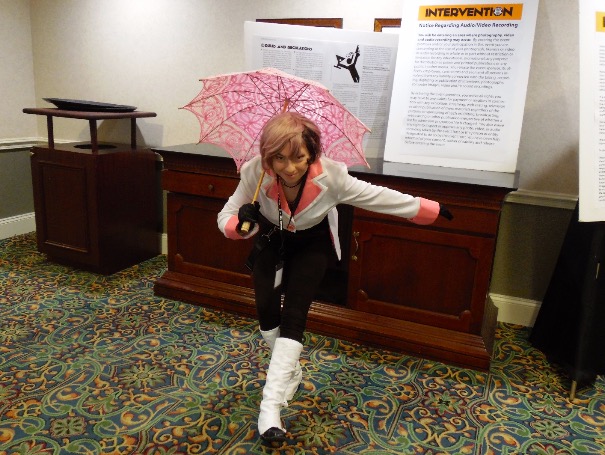 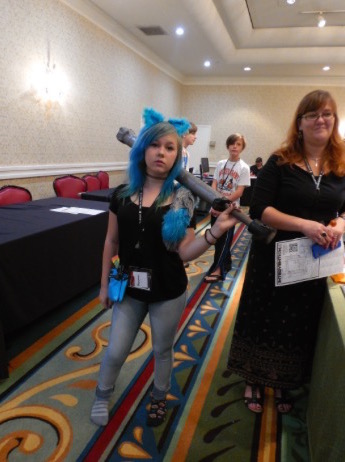 Can you guess her cosplay character? 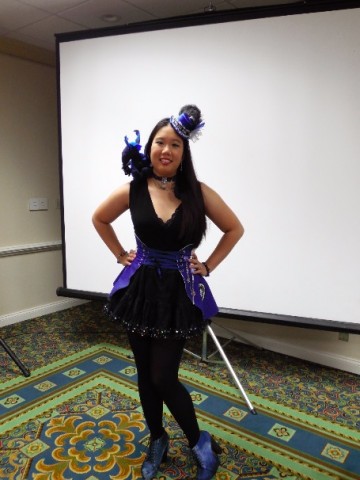 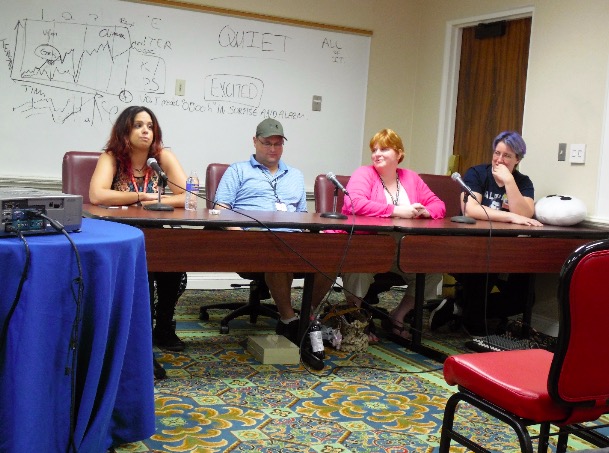 Tai Gooden is a freelance writer, part-time blogger, and full-time Whovian. She has written for several online publications including The Guardian, HuffPost Parents, HelloGiggles, xojane, BlogHer, Paste Magazine, Kasteborous, and BlackGirlNerds. When Tai is not waiting for the TARDIS, she’s either on Twitter or her blog,taigooden.com.