On Intersectionality at the Women's March on Washington | The Mary Sue

Do I Have a Place in Your Movement? On Intersectionality at the Women’s March on Washington 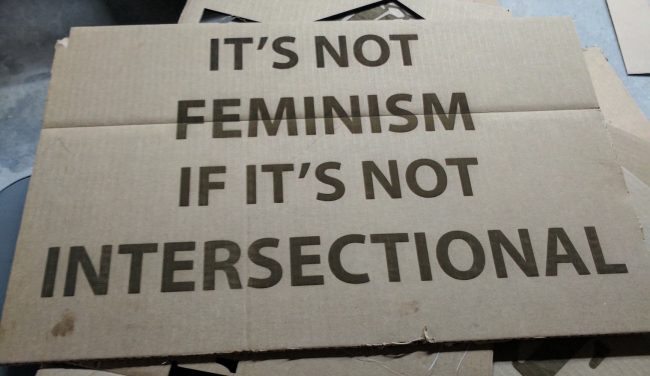 “It’s not feminism if it’s not intersectional.”

These are the words that were etched onto my cardboard sign, a sign that I carried through both the Oakland and San Francisco Women’s Marches that occurred over this past weekend. While much of my experience with this sign and my fellow marchers was actually mostly positive (and my fellow TMS staffers experiences agree, as seen in our video coverage of the event), much has been said online of other peoples’ experiences in calling for intersectionality and a wider scope of feminism.

Before the inclusion of more diverse authors for the march’s mission statement, many people of color took to the various Facebook events to ask that the march take on a broader view of feminism and expand its mission with regards to intersectionality. Many felt that the experiences of people of color, sex workers, and trans and queer people were being left behind in an attempt to make the march somehow more “palatable.”

The resistance to these calls ranged from accusations of instigating infighting, to outright denial that intersectionality was even worth discussing. Eventually, though, the organizers brought on a more diverse author group to help pen the march’s mission statement. One of these authors was Janet Mock, who submitted a line regarding sex workers in particular. The prominent trans activist and author has shared stories of her past in sex work and has called for greater intersectionality within feminism.

Originally, the Women’s March mission statement included: “… we stand in solidarity with sex workers’ rights movements.” However, days before the march, those lines were removed, with no mention of alternative statements or any word as to whether they would be reinstated. It was actions like these that served as a cause for worry amongst many activists who wanted to boost the visibility of previously marginalized women.

It was this exclusion of sex workers and the overwhelming focus on genitalia as markers of womanhood that, at first, made me not want to participate in the march. This hostile response to calls for wider visibility into the lives of more women struck me quite deeply; what possible justification could there be to exclude those who are among the most vulnerable, most marginalized populations on Earth?

The genitalia-focused signs and chants felt, at first, very much like the arguments many trans-exclusionary radical feminists use to exclude trans women from the feminist movement in general. It tied womanhood in with genitalia and body parts, playing at the belief that trans women (not all of whom opt for surgery) are not women because of what is in their pants. It’s that kind of gender essentialist and sexist thinking that often drives trans women away from such functions, because it just about confirms that trans-exclusionary radical feminists will be present.

Let me say it here again, though: that was not the case at the marches that I attended. See, I live in Oakland, which is filled with some of the most progressive, forward-thinking liberal minds in the country. It’s a description that San Francisco once held, but has since relinquished to Oakland (in my mind), as San Francisco has slowly morphed into something else entirely (though that’s another conversation). I expected my sign—and, well, me—to be met with a bit of scorn. I expected that those women who disagreed with calls for intersectionality on the various Facebook events would question my being there, that they would work to exclude me.

Instead, I was met with support, cheers, and more than a few positive greetings and shout outs as folks read my sign. I didn’t get to sit and talk with many of them for long (that was just how the march moved), but their gestures were enough to help me feel welcomed.

Really, that’s all it takes, sometimes. This, in my opinion, is what intersectionality calls for. It asks people to recognize and understand and believe in other peoples’ struggles and fights for recognition amongst everybody else invested in this feminist movement. Rather than rejecting outright the idea that intersectionality was developed to divide, we should look and understand and see and appreciate what their experiences tell them.

Feminism and equality are not zero sum games. Listening to others share their experiences and what they’re hoping for within a wider movement doesn’t necessarily detract, deny, or otherwise take away from your own experience. Being allies and helping them with their struggle as they help you with yours does not divide, as many have suggested—it unites. It promotes understanding. It builds bridges. It takes disparate threads of experience and it weaves them together, much like how your knit pussy hat was made. And as anybody knows, the tighter the knit, the stronger the bond. The stronger the bond, the longer your creation will last—and we want feminism to last, don’t we? We want equality to really last, right?

I guess this is all really just to say that I, as a trans woman, am not necessarily offended or otherwise put out by your pussy hats or your genitalia-focused chants. Rather, I admire and bask in your collective unity. So I feel the need to ask you: do I have a place in your movement? Does someone like me belong in your fight?