Feminism Evolved: What Intersectionality Means in the Trump Era 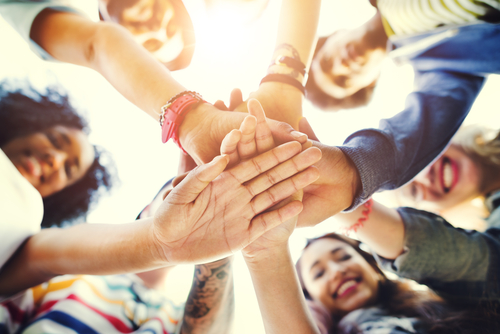 Last weekend I drove six hours over the Cascades in snowy weather in order to have dinner and drinks with an old friend who was visiting from her home in Australia. We discussed the election: the shock, disbelief, and fear we felt after Trump’s win, the sudden and horrible realization that maybe American had not, after all, been making the strides toward equality it pretended.

My friend is young, queer, and strong. I am much older, non-binary presenting female, and less brave. My friend grew up in a household of feminists. I grew up amongst “stoic” conservatives and spent my childhood caretaking both my terminally ill mother and my chronically depressed father. “Gay” was a bad word. My best friend was a young black man who had moved to the U.S. from Ghana. We adored each other. Until my father forbade me spending time in his company. Then we passed notes through the fence on our adjoining properties.

As a child I had absolutely no idea “non-binary” existed. I hated mirrors, photographs of myself, my body. My outside never quite reflected my inside. I felt broken, insubstantial.

I discovered feminism in college, and found solace in the company of strong women. On breaks I went home and argued women’s rights with my father, a newly minted Dittohead whose current favorite word was “Feminazi.” Feminism allowed me to be bold—but it was also safe, in that the Baby Boomer generation had already done the heavy lifting when it came to women’s empowerment. I never dared mention the LGBT college community center I eyed wistfully on the way to classes, wondering if the answers to my increasing dysphoria might lie behind that battered, poster-festooned door. And I certainly never mentioned the fact that I was dating a Latino boy.

Over drinks and pasta in Seattle last weekend my old friend and I tried optimism. Surely Trump would be voted out after four years. But could America survive four years under the management of a man who believed sexual harassment was not only okay but also the norm? To whom ableism, homophobia, xenophobia and misogyny are just part of doing business? Maybe. Maybe, if we—all of us—are vigilant, if we—all of us—make sure no one is left behind.

Intersectional feminism is making sure no one is left behind.

At twenty I was a queer-closeted, fledgling and frightened feminist. In my forties I am out, a champion of queer youth, an author of diverse and #ownvoices stories, and a publisher of LGBTQIA fiction. I am an intersectional feminist. I have a sixteen-year-old daughter who speaks out against misogyny and homophobia on the high school debate circuit. She is an intersectional feminist. My nieces and nephews—one of whom is gay—are biracial, their mother having just recently traded her Indian citizenship for American. They are intersectional feminists. My son suffers anxiety so severe on some days he finds it a struggle to go to school, and who on the night of the election slept restlessly and woke me up often to worry out loud over what a Trump presidency might mean. He is only fourteen, but he is already an intersectional feminist.

I’d like to think their feminism—my daughter’s, my nieces’ and nephew’s, my son’s—has always been intersectional, that the for the most part, the feminists in the Millennial generation have always innately understood that no one should be left behind. That everyone who comes to the table is multilayered, and that everyone who experiences oppression does not experience it exactly the same way.

Intersectional feminism acknowledges that every woman’s experience with oppression is both varied and valid.

Feminism should be about more than ending sexism. Especially in this day and age, as it becomes apparent that for every two steps forward this country takes three back, feminism must be about ending the interrelated systems of oppression that affect every woman differently.

My friend and I couldn’t solve America’s problems over dessert. Optimism felt fragile. It still does. Equality seemed much more distant than it had in October. It still does. Evidence suggested that racist and xenophobic hate crimes are on the rise. We cannot allow this to continue. Even feminism feels lately as if it is in danger of fracturing from within. We cannot allow this to happen.

“Were you worried, as a queer woman,” I wondered, “at all worried about coming to America in this political climate?”

She shook her head. “I’ve got a good group of friends here. I feel safe. We stick together. We look out for each other. We’re gutsy women.”

In the Trump era, intersectional feminism is about rising to the challenge.

Sarah Remy writes epic fantasy about gutsy women and LGBTQ characters. Her latest book, The Bone Cave, was released by HarperCollins in November. She lives on the cold side of Washington State and plans to split winter hibernation months between baking and playing World of Warcraft. Every morning she takes time over coffee to think about the next generation, the challenges they face, and how best to protect them against oppression and adversity. Sarah can be found at sarahremy.com or on Twitter @sarahremywrites.