Internet Murder Revenge Fantasy: Comics Artists Illustrate Poetry About Growing Up on the Internet of Yore

Today’s generation of youth isn’t the first to grow up online, but the Internet where older millennials and gen-Xers spent their formative years was a much different beast—largely anonymous, free of social media, and not even remotely mobile.

“It’s not something I see talked about very often, the weird kinds of experiences that people had in these digital spaces that often don’t exist anymore,” says Toronto-based writer and games designer Merritt Kopas. Her new book, Internet Murder Revenge Fantasy, combines comics art and autobiographical poetry to explore coming of age in the era of dial-up internet and online forums where people could role play and form intense relationships under the guise of anonymity.

“The shape of the Internet has changed. For me, the way I interact with things now, the Internet is a constant second layer over my experience,” Kopas says. “That’s very different from how I used to experience it, which very much was this kind of retreat or this other place that I went to. It felt very geographical.”

In Internet Murder Revenge Fantasy, Kopas, 28, explores that geography through a poem illustrated by 28 different comics artists, including Irene Koh, artist on DC’s Batgirl and Marvel’s 1602, and Michael DeForge, creator of Cave Adventure and Ant Colony and a character designer on Adventure Time.

Each page contains a bite-sized chunk of text illustrated by a different artist, which together form a larger narrative about exploring your identity on chanboards, multi-user dungeons, and all the other disparate digital spaces people carved out for themselves in the ‘90s and early 2000s.

“Part of the book, too, is about roleplaying,” Kopas says. “Even if you weren’t explicitly roleplaying in the sense of going to a place where everyone was assuming a character very deliberately, you were doing some form of playing around with identity. You were creating yourself in a space where nobody really knew who you were.” 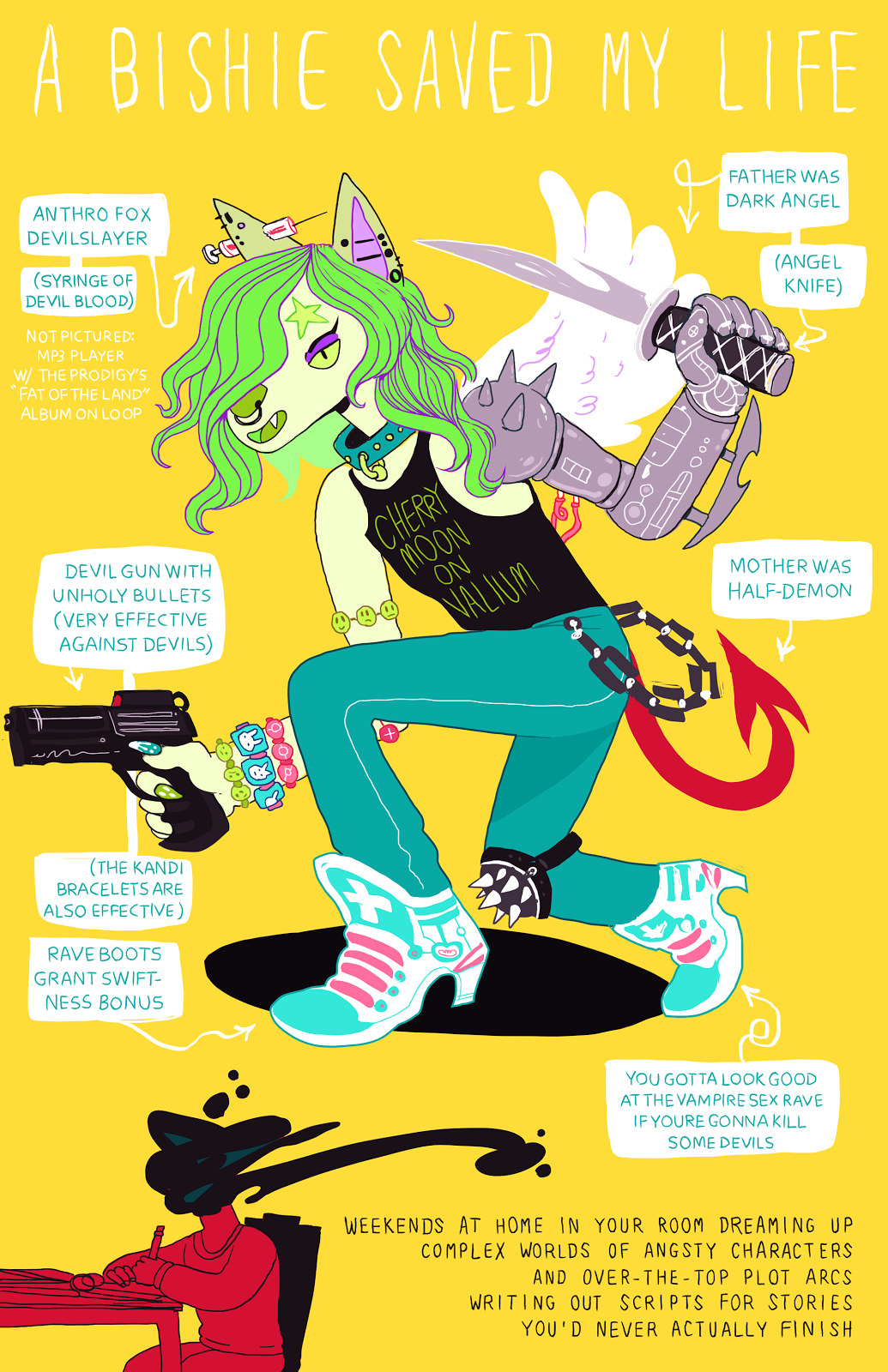 While the text is autobiographical, the book is as much about the artists’ experiences as it is about Kopas herself. Each brought their own creative interpretation to the text they chose to illustrate.

“I’ve only done a handful of comic collaborations before, so it’s not something I’m used to. I think poetry and comics are a pretty natural fit, though, since they’re both so concerned with rhythm and cadence,” says DeForge. “The entire piece was of interest to me, as someone whose social life growing up was primarily online.” 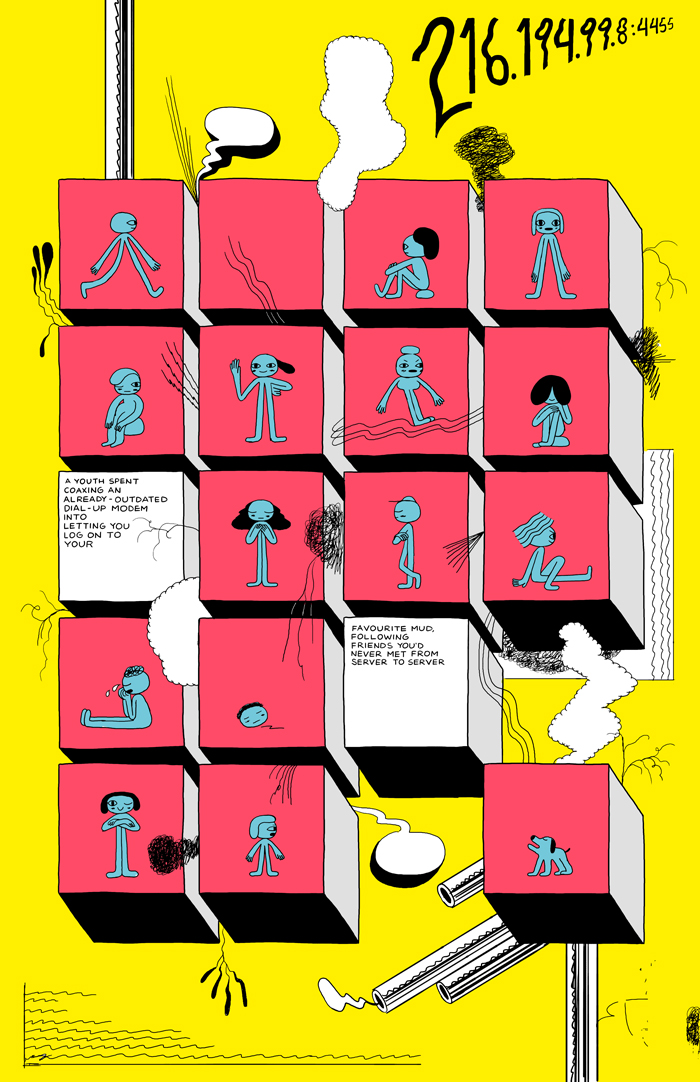 Artist Sophie Foster-Dimino echoed that sentiment: “Though it’s a very personal poem for her, much of it resonates with me as a fellow ‘90s kid, getting online in the AOL era, frequenting chanboards when we were way too young, having intense friendships and relationships with people I never met in person,” she said.

“There’s this nebulous 21st century experience of periodically being reminded of these really intense but completely ephemeral online experiences of your youth. It’s strange to call them ephemeral because they’re often actually much better documented than an IRL experience would be, but even so they seem less real, more like a dream that you can’t verify even actually happened.” 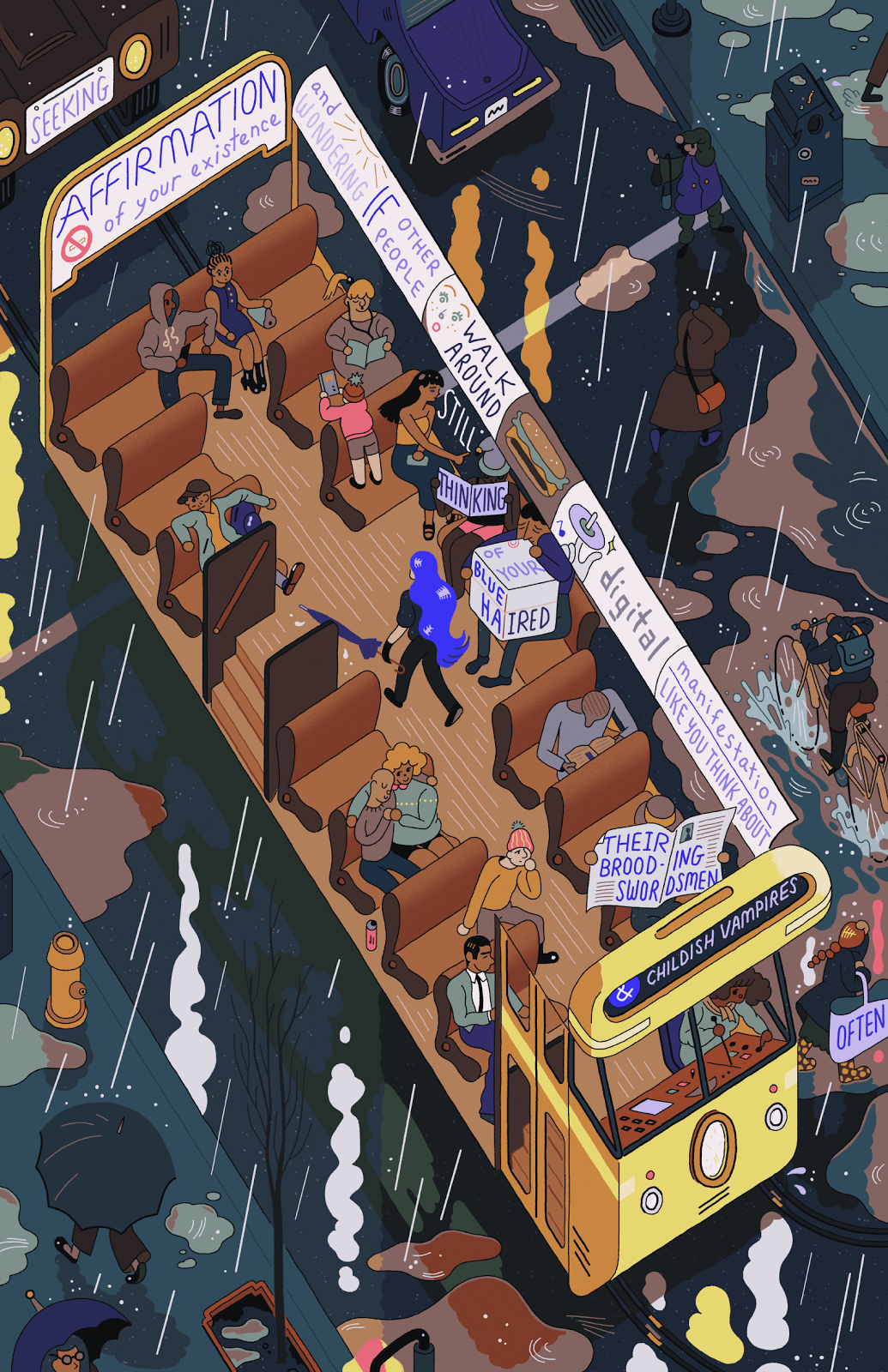 While Internet Murder Revenge Fantasy taps into nostalgia for a time gone by, Kopas says the Internet has, in many ways, become more valuable tool for isolated young people, who can more easily reach out and find their community.

“The Internet is a lot less of a weird, scary, confusing place, I think. If someone is like, ‘Oh, I think I’m queer,’ now they can be like, ‘Maybe I will talk to literally anyone on Tumblr or join a Facebook group or go on Twitter.’ There’s so many more established places to go.”

Digital copies of Internet Murder Revenge Fantasy are available for pre-order, with all proceeds going towards Kopas’ fundraiser for facial and top surgery. She hopes to eventually print a limited run of physical copies.

“I think it really is a beautiful collection of images and to be able to have that as an object would be really incredible.”

Sheena Goodyear is Toronto-based freelance reporter whose work has appeared on CBC News, VICE Canada, the Globe & Mail and more. You can find her on Twitter at@SheenaGoodyear or Tumblr at TheSkortingLife. She spent her formative years on a Buffy The Vampire Slayer message board, where her internet friends once threw her a birthday party.