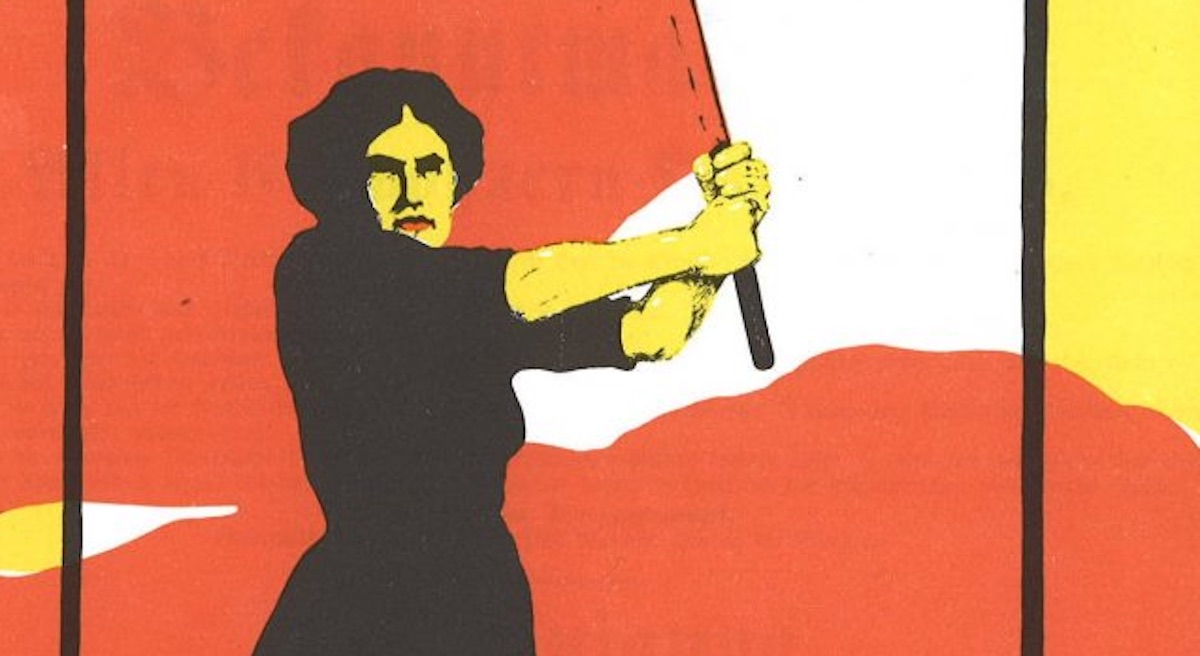 It was early March when an electronic greeting card dropped into my mailbox. The cover featured a colorful depiction of a young female figure playfully applying lipstick, surrounded by flowers and butterflies, along with the text, “Happy Women’s Day.” To be honest, I was a bit baffled.

The following day another e-card arrived, this one featuring a photo of a hot-pink box filled with matching tulips. This second card also wished me “Happy Women’s Day,” helpfully adding the date 3/8. 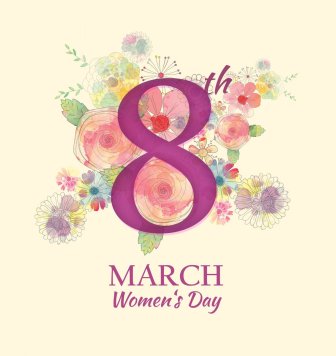 Only then did I realize that International Women’s Day, celebrated worldwide on March 8, seems to be emerging as an occasion for private rituals involving greetings, gifts, and flowers much like Mother’s Day. If that is indeed the case, it will be yet another transformation of a holiday that since its inception in the early 20th century, has undergone vast changes. 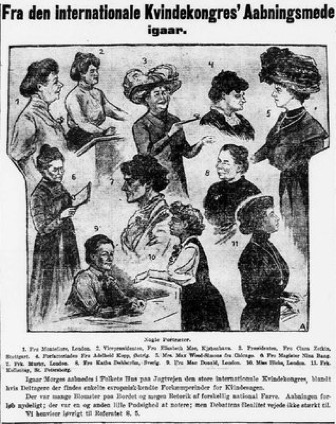 An image from Politiken (Copenhagen) newspaper reads, “From the opening meeting of the International Women’s Congress yesterday” (from http://danmarkshistorien.dk/).

The first “Woman’s Day” celebration took place in Chicago on May 3, 1908. Organized by the U.S. Socialist Party, it brought together an audience of 1,500 women who demanded economic and political equality, on a day officially dedicated to “the female workers’ causes.” The following year, women gathered in New York for a similar celebration. Inspired by these American initiatives, European socialists soon followed suit.

At the International Women’s Conference, which preceded the general meeting of the Socialist Second International in Copenhagen in August 1910, leading German socialists Luise Zietz and Clara Zetkin proposed the establishment of an annual International Woman’s Day (singular) as a strategy to promote equal rights, including suffrage, for women. More than 100 female delegates from 17 countries unanimously endorsed the proposal.

What would seem a fairly innocuous gesture marked a significant break with socialist tradition. Though ideologically committed to human equality, socialists had long argued that women’s liberation would only materialize under socialism, and the only way for working-class women to improve their lot in life was to join working-class men in their struggle. 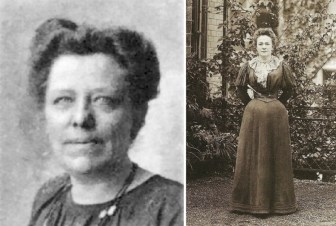 Feminism was seen as a cause for middle- and upper-class women with their own class interests in mind. Yet fearful that the feminist demand for female suffrage might attract too many working-class women, socialist leaders decided to embrace it. Still, they insisted that the vote was a means to an end, not an end in itself.

On March 18, 1911, the fortieth anniversary of the Paris Commune, International Women’s Day was marked for the first time. More than a million Austrian, German, Swiss, Polish, Dutch, and Danish women took part in marches and meetings. The Austrian-Hungarian Empire alone witnessed more than 300 demonstrations.

The 1915 International Congress of Women.

In the following years, similar events spread across the European continent. Generally spearheaded by socialist women, demonstrations called for women’s rights and female suffrage, and many feminists readily joined their socialist sisters.

The outbreak of the First World War in 1914 halted much of the international collaboration that had underpinned International Women’s Day, and sowed deep divisions among socialist women. Some supported nationalist sentiments while others protested the war and called for working-class unity across national divides. Eventually many of these women, including Clara Zetkin, would abandon socialist parties who rallied around the war effort and instead embrace Communist parties and organizations. 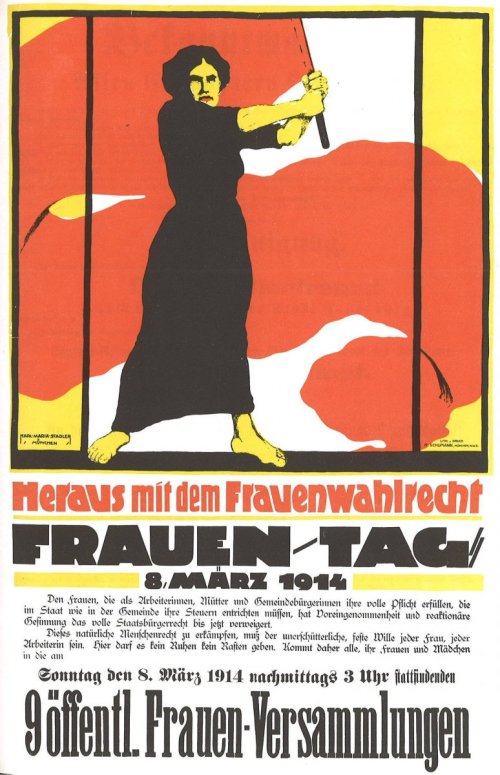 Russian women had first celebrated International Women’s Day on March 8 in 1913. Four years later, on March 8, 1917 (February 23 on the Gregorian calendar then used in Russia), working-class women in Saint Petersburg, exasperated by rising food prices and rapidly deteriorating living conditions, led a demonstration calling for an end to war and political autocracy. Once unleashed, their cries for “Bread and Peace’” could not be quelled. By March 12, Tsar Nicholas II was forced to abdicate. 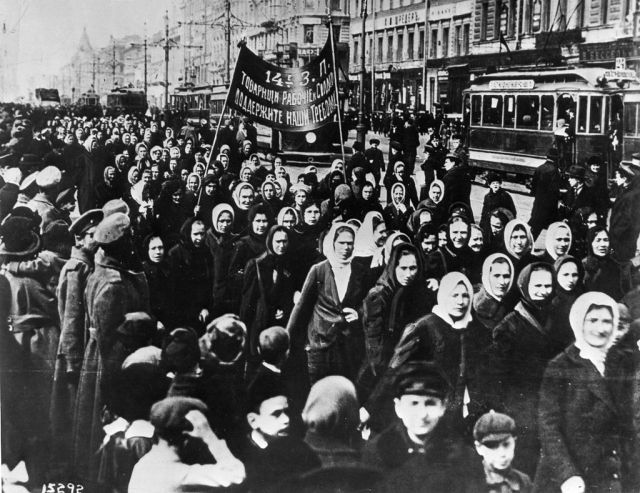 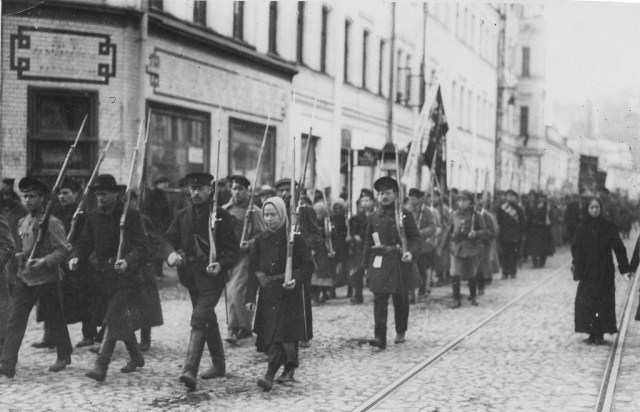 Russian women march in Petrograd, Russia in 1917 on International Women’s Day, in a protest (above) that would mark an immediate precursor to the Russian Revolution (below).

The events of 1917 in Russia ended up setting the date for the celebration of International Women’s Day, not only in Russia but across the rest of Europe.

In 1922, Lenin established International Women’s Day as a communist holiday in the new Soviet Union. The same year, Chinese communists began to celebrate it, and after the founding of the People’s Republic of China in 1949, it was proclaimed an official holiday. Spanish communists used March 8, 1936 as the occasion to stage a huge demonstration in Madrid, demanding protection of the Spanish Republic against the growing fascist threat. 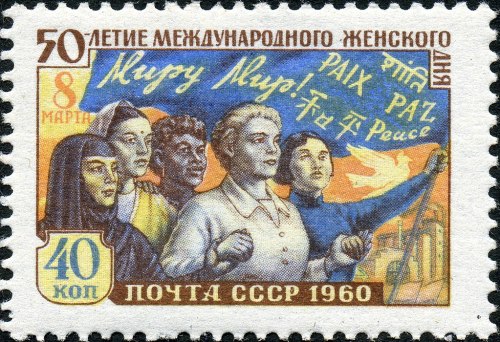 International Women’s Day would remain a communist holiday until the end of the 20th century, marked by carefully orchestrated, state-sponsored celebrations of women’s contributions to the state.

As women in the United States and across much of Europe gained suffrage in the wake of the First World War, much of the momentum for International Women’s Day celebrations waned. During the interwar years, some European socialists and social democrats continued to mark “Women’s Day,” carefully omitting the term “international” to distinguish it from its communist sister celebration, but events rarely drew substantial crowds.

It was only with the emergence of second-wave feminism in the late 1960s, that International Women’s Day reemerged as a significant day of activism. Though the day never (re)captured much attention among American feminists, European feminists embraced March 8 under the updated name, Women’s International Day of Struggle (“Frauenkampftag” in German or “Kvindenes international kampdag” in Danish).

A 1974 poster for International Women’s Day from the United Kingdom.

The new name signaled political radicalism and a resolute distance from organized party politics, both key features of the women’s movement in the 1970s and 1980s. Nonetheless, March 8 celebrations typically involved not only feminists, but a broad assortment of left-wing activists, women’s groups and labor organizations, calling for such issues as equal pay, political parity, reproductive rights and child care. 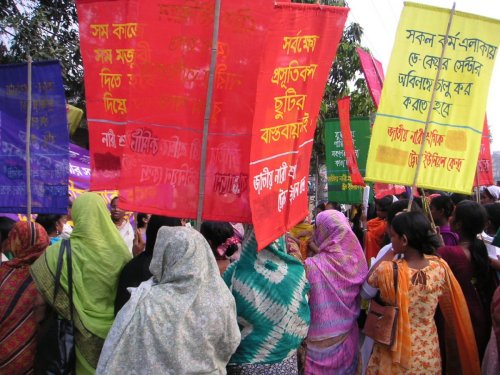 In many developing countries women activists take to the streets on International Women’s Day to voice their calls for gender equality; here women demonstrate in Dhaka, Bangladesh in 2006.

Eager to disentangle this new holiday from the socialist origins of International Women’s Day, the assembly noted that it was to be observed “on any day of the year by member states, in accordance with their historical and national traditions.”

Moreover, in contrast to contemporary feminist practices of casting it as a day of protest, the United Nations billed it as “a time to reflect on progress made” and “celebrate acts of courage and determination of ordinary women.” 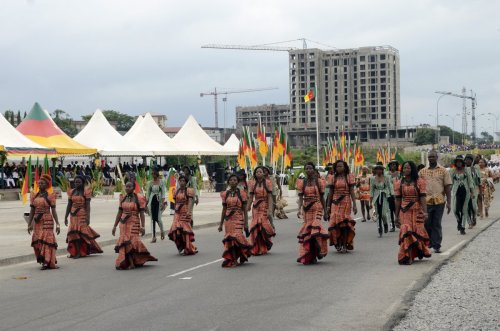 In the decades since the 1977 resolution, The United Nations has in fact marked International Women’s Day on March 8 with events and activities centered around a particular theme such as “Empower Rural Women—End Hunger and Poverty” (2012) and “Empowering Women, Empowering Humanity: Picture It!” (2015). 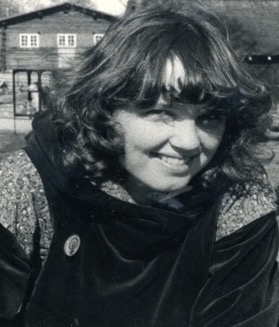 The author on her way to an International Women’s Day rally in 1979.

In spite of such institutionalization of International Women’s Day, and in following with its long history of competing traditions, March 8 is now marked in a variety of ways around the world.

In many (former) Communist regions, it is a public holiday. In Western Europe it remains an occasion for feminist demonstrations, and in many developing countries women’s rights activists take to the streets to voice their calls for gender equality. In Italy, men allegedly give yellow mimosas to women to celebrate the day. And in the United States, some people apparently send cards and flowers to honor the women in their lives.

Birgitte Søland is Associate Professor of History at the Ohio State University in Columbus, Ohio. She teaches European women’s and gender history, and the history of children and childhood in the Western world. Her research interests include the history of women, youth, and children, with special emphasis on children’s rights and children’s welfare. She is the author of Becoming Modern: Young Women and the Reconstruction of Womanhood in the 1920s (Princeton, 2000). She co-edited Gender, Kinship, Power: A Comparative and Interdisciplinary History (Routledge, 1996), and Secret Gardens, Satanic Mills: Placing Girls in European History, 1750-1960 (Indiana University Press, 2005.) In 2003 Professor Soland won the CLIO Award for Outstanding Teaching in History.

Origins: Current Events in Historical Perspective is an online magazine dedicated to providing historical insight on current events that matter to the United States and to the world. Each month, Origins invites historians and other academic experts to analyze contemporary pressing issues—whether political, cultural, or social—in a broader, deeper context. Origins is a joint production of The Ohio State University and Miami University Departments of History, with the generous support of the Stanton Foundation. Check out their website for a ton of other great articles, book reviews and podcast episodes on the history of women and gender here.