Can International Men’s Day Help the Feminist Cause?

It's not about #NotAllMen

I’m often the last person to hear about trends, which is probably why I was such a geek growing up. Before this week I had no idea that International Men’s Day – which is celebrated on November 19th – was even a thing, let alone that it’s been around since 1999. Did you? And more importantly, should it be a thing?

The more I’ve looked into International Men’s Day, which was founded in 1999 by Dr. Jerome Teelucksingh in Trinidad and Tobago, the more I see that there are two things going on. There’s what the organization responsible for International Men’s Day say and want it to be about, and there’s the interpretation of it and what it’s about. And the two, more often than not, have very little to do with each other.

Let’s start with International Men’s Day itself. According to their website, the Six Pillars of IMD are as follows:

The 6 Pillars of International Men’s Day
1. To promote positive male role models; not just movie stars and sports men but everyday, working class men who are living decent, honest lives.
2. To celebrate men’s positive contributions to society, community, family, marriage, child care, and to the environment.
3. To focus on men’s health and well being; social, emotional, physical and spiritual.
4. To highlight discrimination against men; in areas of social services, social attitudes and expectations, and law
5. To improve gender relations and promote gender equality
6. To create a safer, better world; where people can be safe and grow to reach their full potential.

Now, some of the language there is iffy, no question. For example, use of the word “discrimination” in Number Four, because men aren’t being discriminated against the way that women are in a patriarchal society that systemically favors them. However, I think the important bit is in the next part of that; the part about how men are offered social services, what social attitudes and expectations are of men, and how the law treats men (particularly when they are of color), are all things that are worthy of discussion. After all, the stereotype is, and often what’s expected, is that men “don’t talk about stuff like this.” Men “don’t go to doctors.” Men “don’t ask for directions.” Men “don’t cry” or “only care about ‘one thing'”

There certainly seem to be some organizations that are going about IMD all wrong. At the University of York in the UK, the University observed IMD, and on the school’s website, Academic Support officer Dr. Adrian Lee made the following in a statement about it:

Men are under-represented in the student population as a whole; they are also significantly under-represented in a number of academic disciplines across all three faculties. [M]en currently have to wait longer than women before they receive a State pension and at certain stages in life, they are less well protected by equality legislation than women. These issues inevitably impact on men employed at the University and on the lives of our students.

The statement completely ignores the structural, systemic sexism that has historically favored men and brought us to this point, and in response to that wrongheadedness, 200 staff and students of the school signed an open letter condemning the statement, and the fact that IMD was acknowledged there at all. 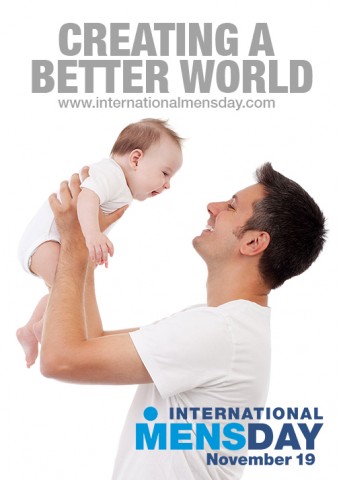 There’s an interesting op-ed piece over at The Daily Dot in which Tiffanie Drayton focuses on the fact that International Men’s Day actually benefits the feminist cause by allowing for a day in which we can analyze gender roles, and broaden the definition of what “being a man” means. Because while many, like Scaachi Koul at Buzzfeed who couldn’t help but make stereotype-based jokes, can’t even say International Men’s Day without jumping to the #NotAllMen conclusion, others draw attention to the fact that it’s precisely that jump to stereotyped masculinity that proves the need for IMD in the first place. After all, IMD can also be about gay men, trans men, non-gender conforming people who are more masculine-identified, etc. Not to mention that being a man while white and being a man of color presents two totally different experiences of masculinity.

Masculinity and what it means changes depending on the man to whom you are speaking. So men, like women, need intersectionality in their discussions of gender, and IMD may provide the perfect platform with which to have that.

I have to admit, that I can’t even say International Men’s Day out loud without cringing a little bit. I say this not to justify it, but to examine just how much patriarchy has screwed us all up. It’s the same reflex that causes people to cringe about having a male nanny or babysitter, or having a relationship with children at all because of course that’s weird. Men don’t deal with children, so clearly, that guy must be some kind of pervy pedophile. It’s assumed that men will do harm, and so we don’t often encourage the opportunity to do otherwise.

It’s sad that I cringe at the very idea that men would want to get together to talk about their feelings and concerns in their desire to improve gender relations and help bring about equality, because it seems suspect to me; that I embrace efforts to “bring men into the conversation” when they’re proposed by other women, but when men decide to do it themselves, I feel uneasy. It sucks to feel that way. It sucks, because I want to trust men who genuinely want to fight for equality and take down toxic masculinity. Like Mulder: I Want to Believe.

Which is why I think there’s a place for International Men’s Day, so long as they’re willing to learn and grow as an event, are genuine about their commitment to gender equality, and are inclusive to all men – not just the cis/straight ones. If done right, IMD could be a time when men actually get together to do some good. After all, Movember is a really popular, men-focused charity endeavor that raises money and awareness to prevent men’s cancers and other men’s health issues. IMD could encourage more of that – showing that it is indeed possible to have a man-focused event that isn’t anti-woman.

Anyone out there have any good experiences they’d like to share about IMD? Should we be interacting with the event next November? How do you think IMD can be used to create genuine positive change with regard to how we interact with gender? Let’s talk in the comments below!