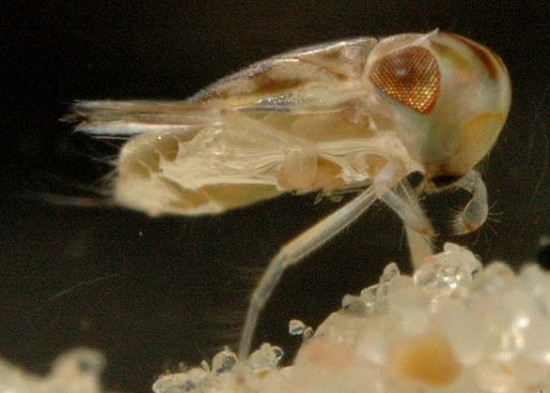 The lesser water boatman Micronecta scholtzi may be small, but he is most certainly mighty. Just two millimeters long, this pygmy aquatic insect has a phenomenally loud song. The males of the species sing in groups, often to attract the silent females, and despite living underwater their chirping is audible from the riverbank, several meters away.

Taken in comparison to the tiny organism from which it emits, the loudness of Micronecta’s song is a record breaker. While there are other species that make much louder calls, the loudest being the sperm whale which sings at around 236 decibels underwater (which is around 170 decibels on land), these other species are typically quite large.

Micronecta on the other hand is incredibly small. But amazing things can come from small packages. Very small packages, in fact. At a length of only 50 micrometers, this pygmy aquatic insect’s penis is the secret behind its impressively loud mating call. Yes, the insect plays its penis like a musical instrument to attract the ladies.

To really see if the little insect could take the crown for being loud, Jérôme Sueur from the Natural History Museum in Paris studied Micronecta using underwater microphones. These insects are naturally found in freshwater locations across Europe, particularly in the south. Micronecta means “small swimmer” which is appropriate because of the several hundred species of lesser water boatmen, this species is the smallest.

While the mighty sound of the aquatic insect is enough to make a splash in the research community, the study went further and also looked into how Micronecta accomplishes this amazing feat. The insect makes the loud sound by rubbing its ribbed penis against the ridges on its belly. The scientific term for the chirping sound made by lesser water boatman species is called stridulating, which in essence means brushing.

Why this insect needs such a loud mating call isn’t clear, but according to the researchers such extreme displays may be an example of an exaggerated secondary sexual trait, which develops as a result of sexual selection unhindered by predation. In other words, the song is a sexual signal where the louder you are, the more strong and powerful you seem. If a loud song is the key to convincing the ladies its time for some insect lovin’, its quite likely that the calls would get louder and louder over time. This would be particularly true if a lack of predators would mean there are more males to compete with to get female attention.

Researchers are also still looking for what amplifies the sound of the insect’s penis song to such high decibels, but they believe it may have nothing to do with the involved body parts. Like other lesser water boatmen, Micronecta has microscopic hairs on its body that trap a layer of air, which then surrounds the organism. This helps it to breath underwater, but could also act as an amplifier, echoing the sound of the song. Because the species is so small, studying this phenomenon poses an extreme challenge.

The acoustic abilities of large marine and terrestrial animals has been extensively studied, but very little is know about the sounds produced by small arthropods that live in freshwater. There are still many questions to be answered about why the songs of Micronecta are so loud, if the females of the species really prefer the louder songs, and if predation plays a role in how loud the insects can get.

But, with so little information available, the knowledge that Micronecta can make the loudest mating call in the world (compared to body size) with its tiny penis represents a significant scientific breakthrough.

(via Not Exactly Rocket Science Photo via Microcosmos)