Critics Drool Over Inception: Compare It to The Matrix, Bond Films, Kubrick and Coppola 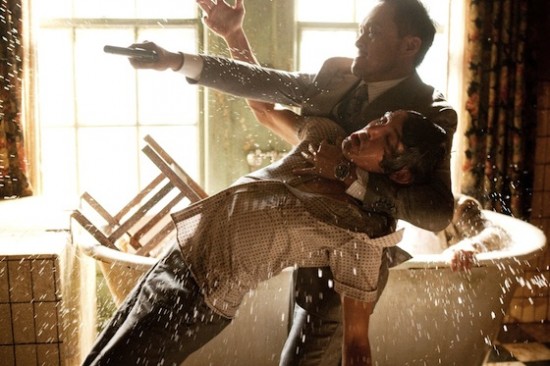 We can all breathe easy, but only for a few moments, before we start hyperventilating with unbearable anticipation. The review embargo for Christopher Nolan‘s Inception lifted yesterday at 6PM EST, and the critics that have weighed in are universally locked in verbal lust with the film.

If this first wave of reviews is to be believed, Inception is Nolan’s magnum opus, deftly weaving mindboggling visuals, emotional pay-off, and intricate storytelling into an intelligent sci-fi blockbuster. Though a backlash is inevitable sooner or later (Armond White?), the word seems to be that this could be the first must-see film of the year. The highlights of some of the more interesting Inception reviews, after the jump:

Nev Pierce, Empire (5 stars): Pierce makes daring comparisons, saying “it feels like Stanley Kubrick adapting the work of the great sci-fi author William Gibson (Neuromancer) — except Nolan appears to like people more than the 2001 auteur,” and also “like The Matrix mated with Synecdoche, New York — or a Charlie Kaufman 007.” He also says Nolan’s thematic concern with art is fully explored here with the imaginative power of dreams, though not for the sake of “self-referential indulgence,” instead lending itself to an action-driven “blockbuster allegory about grief, faith and the desire for an afterlife.”

Dustin Hucks, Film School Rejects (A+): Hucks calls Inception “close to perfection,” able to balance both a “cerebral plot” that both taps into heart and brain, with “beautifully” shot action sequences. “Nothing that I saw registered as a computer generated image in my mind,” he writes–ridiculous, considering the movie revolves around dreams and the impossible environments they create–some parts are reportedly “like watching an Escher lithograph come to life.” Hucks also praises the cast, especially leading man Leonardo DiCaprio for disappearing so completely into his secretive character of Dom Cobb. For the “Downside” section in the verdict, he claims: “I’d have to make something up.”

Devin Faraci, CHUD (10/10): The review pulls no punches, kicking off with: “Inception is a masterpiece.” And though the stakes are increasingly raised, the action sequences increasingly jaw-dropping (Faraci said he wanted to stand up and applaud after Joseph Gordon-Levitt‘s zero gravity fight in the hallway), the film’s admirable progression is always based on “emotional breakthroughs.” It’s also another review that sings praise for the young cast, being “the most serious actors of their generation.” In this day and age, that now-auteur Nolan is able to “tell a personal story that’s smart and uncompromising” with “huge-budget filmmaking” is truly impressive to Faraci.

Kirk Honeycutt, The Hollywood Reporter: Honeycutt is thoroughly impressed with the film’s originality, and says the complex dream logic of Inception‘s world can be so intricate that it may merit repeat viewings (I welcome this), though “all that restless energy might induce a kind of reverse stress in audiences, producing not quite tedium, but you may want to shout, ‘C’mon, let’s get on with it.'” A good movie should have you tired, I say. I’m not here to sit back and passively assimilate, but lean forward on the edge!

Mr. Beaks, Ain’t It Cool News: AICN says that Inception is a meticulous creation, working “brilliantly on every conceivable level” for both mainstream audiences and film lovers alike, in that it is “a multi-layered meditation on the unruly clutter of the subconscious that works sensationally well as a classical action film.” Again, the film’s complexity only lured Mr. Beaks in more: “Based on one viewing, I’m not ready to break Inception down with any degree of assuredness. But I want to. God, how I want to. I haven’t been this obsessed with a film since Primer … What’s most exciting about Inception is that it finds Nolan peaking as a visual artist; he’s using the extravagantly cinematic tropes of other genres to connect with the viewer intellectually.”