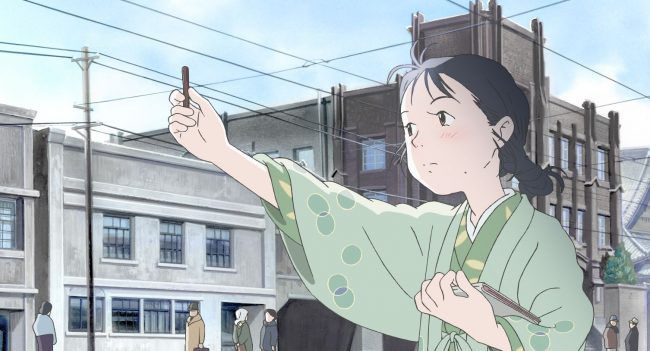 Shout! Factory has acquired distribution rights In This Corner of the World in North America, and hopes to bring it to theaters this summer. The media company entered into an exclusive film deal with Animatsu Entertainment and announced it in a press release yesterday.

Based on the manga by Fumiyo Kouno, and written/directed by Sunao Katabuchi, the film is a hand-drawn story about the “resilience and triumph of the human spirit.” Here’s the synopsis:

In This Corner of the World follows a young lady named Suzu Urano, who in 1944 moves to the small town of Kure in Hiroshima to live with her husband’s family. Suzu’s life is thrown into chaos when her town is bombed during World War II. Her perseverance and courage underpin this heart-warming and inspirational tale of the everyday challenges faced by the Japanese in the midst of a violent, war-torn country. This beautiful yet poignant tale shows that even in the face of adversity and loss, people can come together and rebuild their lives.

Animatsu Head of Acquisitions and Marketing Andrew Hewson says, “This truly is a unique and exquisite film, one which only comes around once every few decades, and we are incredibly proud to be involved with it. Unique films deserve unique partners and Shout! Factory are an absolute perfect match given their passion, expertise and back catalogue of releases.”

Senior Vice President of Kids and Family Entertainment at Shout! says that the company “couldn’t be more excited and honored about this new opportunity with Animatsu, Sunao, Genco and Mappa animation studio.” She also calls the film, “Beautiful and deeply moving, In This Corner of the World is a captivating, socially relevant film that will impact everyone who sees it.”

Director Sunao Katabuchi began his career working with Hayao Miyazaki before directing films like Mai Mai Miracle and Princess Arete. In This Corner of the World has already won a number of awards and promises to be a powerful film. Are you going to check it out this summer?