In Defense of Jennifer Lopez's "Let's Get Loud!" | The Mary Sue

In Defense of Jennifer Lopez’s “Let’s Get Loud!”

Mi gente, it's our time! 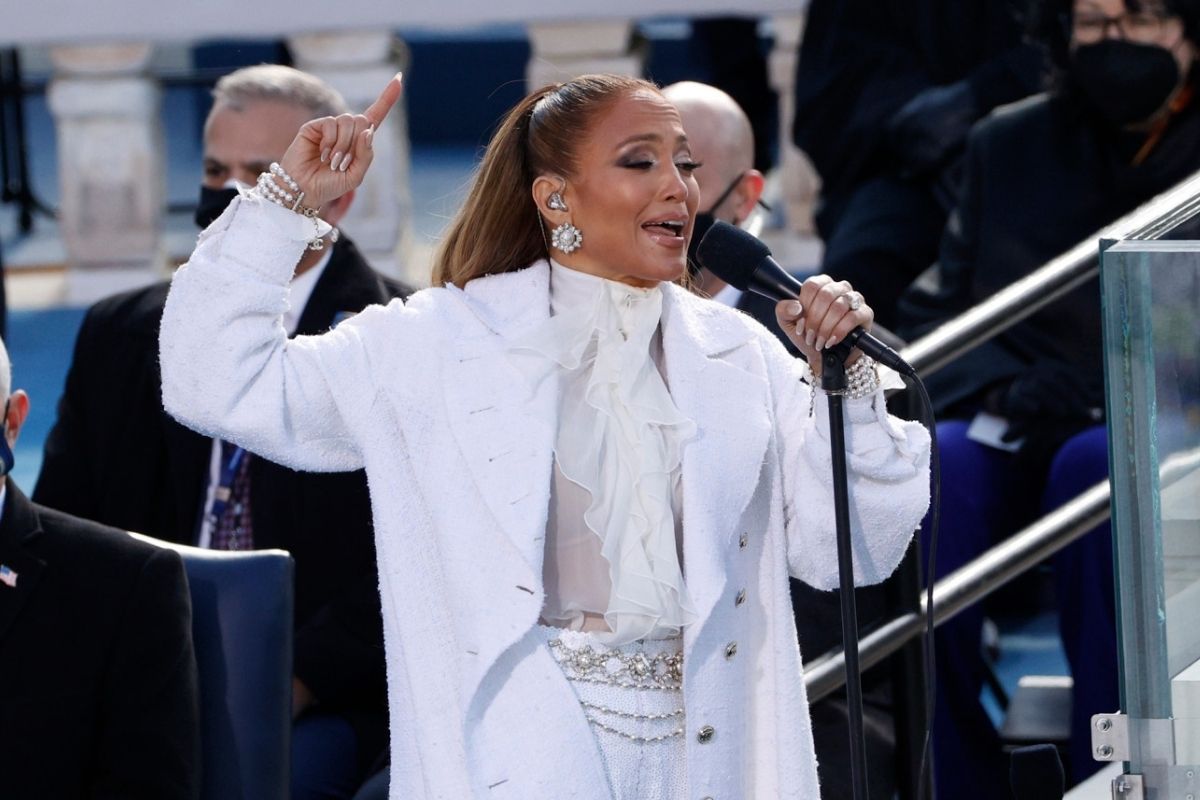 Jennifer Lopez had the opportunity of a lifetime when asked to stand on the inaugural stage as the nation welcomed President Joe Biden and Vice President Kamala Harris. It was her moment, and she certainly wasn’t going to waste it, because after the vitriol Latinx people have had to endure during the Trump Administration—I’ll remember the “bad hombres” comments til my dying day—this was the time to champion change. And she did so in her performance not once, but twice.

In the middle of “This Land Is Your Land” Lopez broke into Spanish and said, “Una nación bajo Dios, con libertad y justicia para todos.” One nation under God, with liberty and justice for all. As a fellow Puerto Rican, these words shook me. Lopez, the daughter of Puerto Rican parents herself, was on the world’s biggest stage and she was telling Latinx people everywhere that this nation is ours just as much as anyone else’s.

Lopez then took it up a notch by yelling, “Let’s get loud!” And just as quickly as she said it, the haters started pouring in instead of taking a moment to let it sink in. They couldn’t believe that Lopez had just yelled out a part of her song during “This Land is Your Land.” They called her whiny, chaotic, and opportunistic. They couldn’t be further from the truth. Lopez knew what she was doing when she included “Let’s get loud!” during her inauguration performance. And it’s for the same reason she said her piece in Spanish moments before.

“Let’s get loud!” is a call to attention to all the Latinx people of the United States of America. It’s a reminder that change has arrived, and its name is President Joe Biden and Kamala Harris. No more do we have to suffer under a president and his government who vilify and look down upon Latinx people with distaste and distrust. It’s a call for hope, love, and connection that we are being included in the equation after 4 years of being left out of it. And I thank Lopez for using her platform to rile us up and get us ready for the governmental shift that has arrived.

So, here’s to you Jennifer Lopez. It’s our time to get loud, and you best believe that we’re here for every minute of it. Let change reign. Let families reunite. Let cages and borders no longer divide us. One nation under God, with liberty and justice for all.

Jennifer Lopez performed. She screamed in Spanish one nation, under God, indivisible, with Liberty and Justice for all in the middle of her performance #InaugurationDay pic.twitter.com/RiCudJUffK

DID SHE JUST INTERPOLATE LET’S GET LOUD

WE HAVE NO CHOICE BUT TO WORSHIP UNTIL THE END OF DAYS pic.twitter.com/trMrPc4bye

JLo told America: You can have a little Let’s Get Loud, as a treat.

“Lets get loud” is a call to latinos to be heard. To fight for OUR voice to be heard. She wasn’t plugging her song.

So proud of this Woman! @JLo you did this! Yasssssss boo! 🇺🇸 🇵🇷 #LatinoGang #letsgetloud https://t.co/FvU1ZO0VJR

JLo rocked the Super Bowl, sang in the New Year in NY and now in the inauguration of the President and all that in less than 1 year! THE POWER! THE VOICE! You have it all, so proud, I love you with all my heart @JLo 😭♥️✊🏼👑 #LetsGetLoud #InaugurationDay pic.twitter.com/vDZJLzRAWv