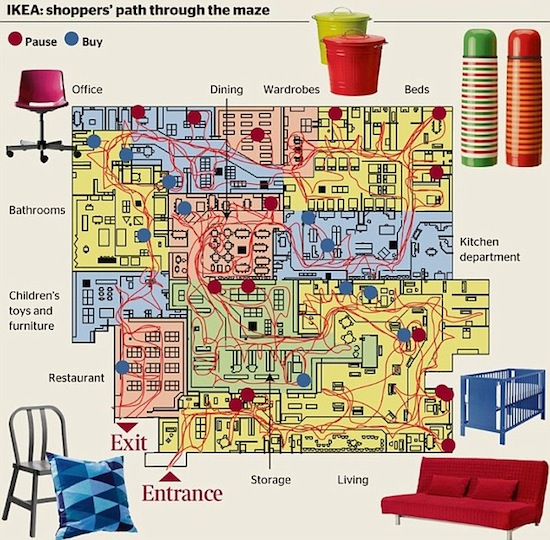 An architecture professor named Alan Penn alleges that IKEA stores are laid out in a deliberately confusing manner in order to nudge customers into zigzagging confusedly through the store, upping their chances of encountering things that weren’t on their shopping lists and impulsively buying them.

In Ikea’s case, you have to follow a set path past what is effectively their catalogue in physical form, with furniture placed in different settings which is meant to show you how adaptable it is…

By the time you get to the warehouse where you can actually buy the stool or whatever’s caught your eye, you’re so impressed by how cheap it is that you end up getting it.

Also you’re directed through their marketplace area where a staggering amount of purchases are impulse buys, things like lightbulbs or a cheap casserole that you weren’t planning on getting.

Here the trick is that because the lay-out is so confusing you know you won’t be able to go back and get it later, so you pop it in your trolley as you go past.

Is there an IKEA shopper who hasn’t happened to?