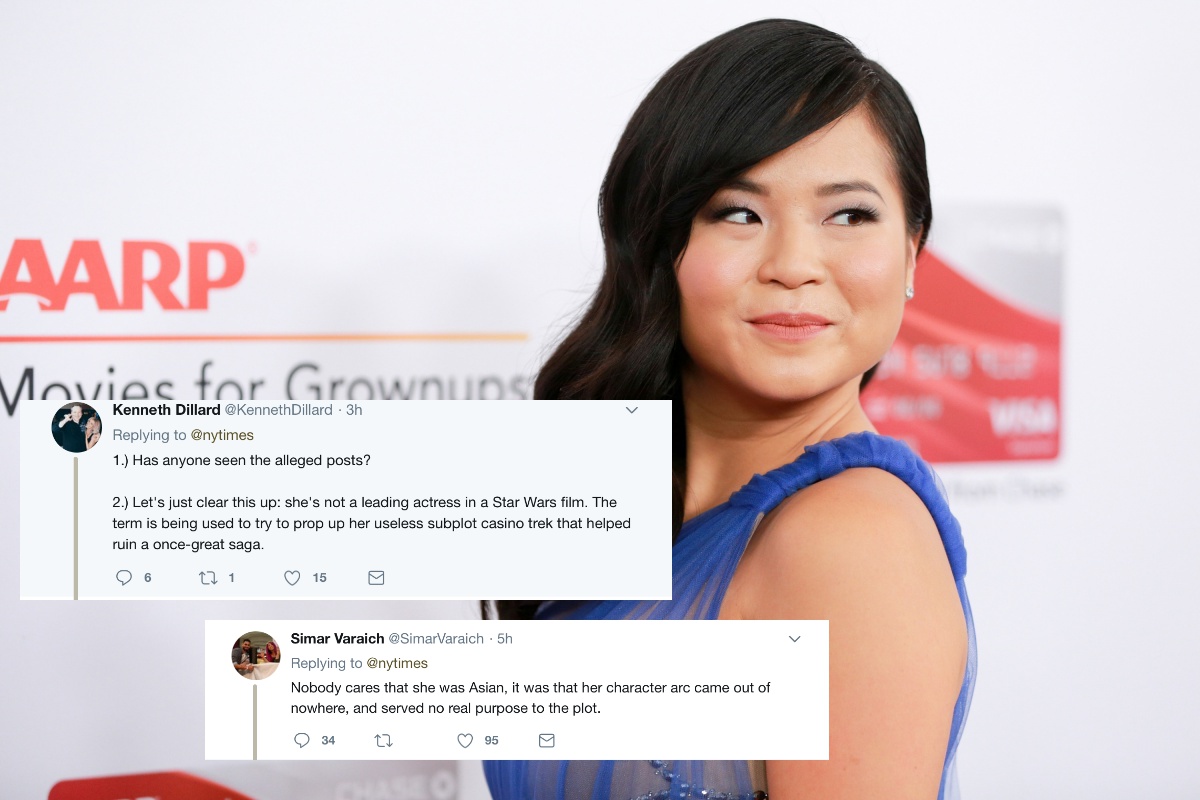 Kelly Marie Tran, birth name Loan, the first Asian woman to appear on the cover of Vanity Fair and first woman of color to have a leading role in a Star Wars movie, came out earlier today with an amazing essay about the harassment experience that drove her off the internet (so you can stop “speculating” that wasn’t the case), and yet, people feel the need to make it clear that they support Tran in spite of their hatred for Rose Tico, and I must ask … why do you feel the need to point that out?

Rose Tico and her storyline in Star Wars: The Last Jedi are among some of the most divisive things in the fandom right now, and there are good criticisms of both online. However, when discussing the racism that an actress is facing, an actress who hasn’t done anything to deserve the ridicule, why does anyone feel the need to say, “Ugh, Rose Tico is the worst character since Jar Jar Binks. Sucks about that racism tho?”

I know why I sometimes feel the need to do it. It’s because I know that, as a black woman, if I don’t prove myself to be “rational,” it will be assumed that I have an “agenda” and can’t ever be impartial—that simply liking a character would somehow compromise my ability to accurately assess a situation.

Whenever people talk about racism in fandom and the response to it, there is always a faction of people who think that pointing out the micro-aggression or racism embedded in certain statements means that you’re calling everyone who dislikes something racist, sexist, homophobic, etc. Unless people are reaching, they’ll be able to tell if your critique of Rose Tico comes from a place of wanting the first woman of color lead in Star Wars to have a better storyline, or from you being upset that there is an Asian woman of color existing in Star Wars. You don’t need to then uplift commenters who are being racist in order to show you aren’t alone in disliking Rose Tico.

Avoiding lifting up those voices is especially important when there are commenters who will pretend that these racist attacks are not happening, as if Kelly Marie Tran wants attention due to being harassed. As if we didn’t see screenshots of racist comments edited into her Wookiepedia page. As if we don’t have proof of the types of aggressive comments she was getting, both racist and otherwise.

There’s articles ones can google but here’s one just to help you. pic.twitter.com/OGdVC1J0ij

So stop trying to carry the weight of racists when these comments come up. You are allowed to dislike Rose Tico as a character, but you do not have to include that as part of your defense of Tran, as if not combining the two might come off as you … liking The Last Jedi, Hera forbid.

Since the moment John Boyega’s beautiful brown head popped out in a Storm Trooper uniform, the discourse around race in Star Wars has changed. It has shown many people’s true colors and told many fans of color that they don’t belong. Daisy Ridley and Kelly Marie Tran have both been run off of social media, with John Boyega and Mark Hamill basically doing the Force’s work and cutting down those filled with hate, but it has been a struggle.

If people who hate Rose Tico and hate The Last Jedi for valid reasons want to separate themselves from the racists, then do that by acknowledging the racists, calling them out, and showing that being critical doesn’t mean being racist.