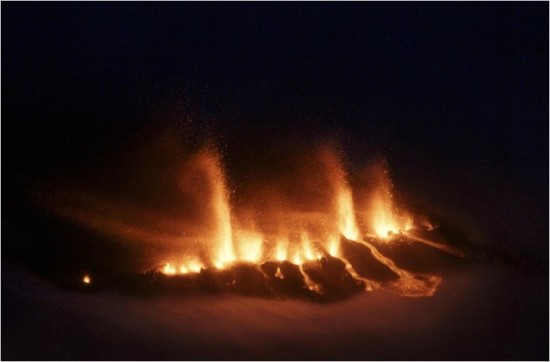 At about 11:30 Saturday night, just as Iceland was easing into the day of the vernal equinox, a volcano erupted right next to the Eyjafjallajokull (yes, really) glacier.  Icelandic authorities evacuated hundreds of people from surrounding towns, fearing flooding from the melting glacier.  There have been no reports of injuries or property damage, and so we can say with only a little guilt that this volcano looks awesome.

The fissure is half a mile long and looks like something out of the Rite of Spring section of Fantasia.  Video after the jump.

The only question that remains is why did the volcano, dormant for over two hundred years, erupt now?  Fire, on a mountain, covered in ice?  Sounds like a great place for a temple.  Yearly celestial event?  Sounds like a great time to become embodied by the spirit of one of your past lives in order to save your friends from certain death at the hands of the Fire Nation.