I Never Wanted to Be Leia: What Han Solo Taught Two Women About Gender and Sexuality 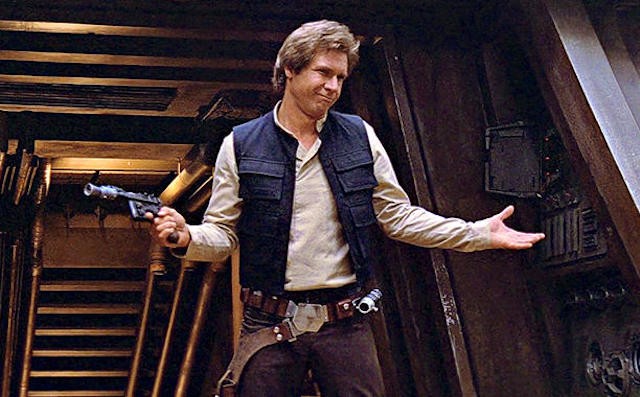 You know that old chestnut about James Bond, “Women want him and men want to be him”?

I think that was also supposed to apply to Han Solo. He’s got so many Bond characteristics: He works his way through the Galaxy, having adventures, slinging a blaster, wearing tight pants and a sexy sneer, putting his feet up on cantina tables, and shooting first.

I never wanted Han to save me, or kiss me, or say “I know” to me, yet I was drawn to him far more than I was drawn to any of the other characters. I paid more attention to his scenes. I knew his lines. I just wasn’t attracted to him, and I couldn’t understand that. It wasn’t that I didn’t find Harrison Ford attractive—I had a raging crush on Indiana Jones, after all—I just felt differently about Han. As late as college, when other women tried to bond with me over Han Solo, I would reluctantly admit to a crush I didn’t really have on the character. Sometimes, I would convince myself I had one, because I must, right? Why else would I be obsessed by him?

As a kid, when I played Star Wars with my brother or friends, there weren’t a lot of characters open to me, or at least I didn’t think there were, because this was the ’80s—girls were supposed to play girl characters, and boys were supposed to play boy characters. When it came time to choose characters, I never had a burning desire to yell, “I’m Princess Leia”. It wasn’t that I didn’t like Leia. I did, and I still do. It was just that being her didn’t appeal to me.

I let other girls play Leia. Instead, I made up my own character. She had a ship (my bed) and a comm (my Care Bears tape recorder), which played “transmissions” from the Death Star, and although she made a lot of brave pew-pew noises, the Death Star always ended up hauling her in with a tractor beam (because it’s no fun if you get away without having to hide in the hold first). Even then—after many imaginary missions to the Death Star, and after creating a character in a high school drama class who was a sexy lady who piloted a plane and had adventures (“On her own?” asked one girl in my class, “but who is her boyfriend?”)—I didn’t get it.

I credit gender-swapped cosplay for finally making my own feelings clear to me. One day, I was browsing Facebook when I saw a photo of a female friend dressed as Han Solo for a convention. I felt this little tendril of jealousy curl up within me in exactly the way it never did when I saw Han and Leia kissing in the movies. Seeing my friend rocking her blaster at a con made me finally understand: That’s what I want, I thought. That is what I’ve always wanted. I want to fly a broken-down ship with my best friend. I want to laugh at danger. I want an enemy as cool as Boba Fett.

But then, I thought back on my life and saw that I’ve kind of had that, without all the blasters and spaceships. I’ve had a career where I didn’t really have to follow many rules. I drive a car that’s pretty Falcon-like in its breakdowns. I’ve got so many friends to have adventures with. Hell, my name is even Ann.

I never wanted Han Solo. I wanted to be him.

It’s a little embarrassing that I didn’t figure it out sooner, because it seems so simple: you should be able to be whoever you want, no matter your gender, race, or your sexuality. You can be drawn to a character without being limited by a crush on him or her.

Yes, Han Solo is a sexy beast. But that doesn’t mean we all have to lust after him. We can be sexy beasts too, if we want.

I have a distinct memory of walking out of the theater with stars in my eyes and only one thought in my mind: Han Solo. I also remember vividly looking at my younger sister, who had the same expression, and being horrified when she whispered in awe, “Luke Skywalker.” My mind could not comprehend how we could see the same movie and she not see how superior Han was to Luke. It still baffles me.

I used to think I could tell a lot about a person by who they preferred, Luke or Han, but the world doesn’t work like that, and my sister soon got over her first crush. I never did.

I’ve put a lot of thought into Han Solo over the years. A lot. In fact, I’ve just recently come to terms with the fact that I’m not so much a Star Wars fan as I am a Han Solo fan. The movies without him mean very little to me. This occurred to me when I realized my problems with the prequel movies were far different from everyone else’s.

Since I’ve had him in my life for as long as I’ve had memory, he’s been my prototype for the characters I’m drawn to in fiction and the characteristics I find myself most attracted to in real life.

They must be funny, that’s a MUST—sarcasm is my go-to, but just plain witty is a close second. They have to, at the very least, allude to a life lived beyond the story we’re in, a shady past, a driving force all their own. They tend not to be the “hero” of the story; instead they are the hero’s best friend or, even better, the anti-hero. They need to be the person who has their own agenda, who despite their better judgment, will eventually do the right thing but maybe not for the “right” reasons. Of course, having a roguish, wicked Harrison Ford grin doesn’t hurt, but we can’t have everything.

My life would have made so much more sense so much earlier if I would have realized way back then that who I really wanted to be in the Star Wars universe was Chewbacca; the sexless side-kick. I just wanted to travel with Han—to have shenanigans and some glorious banter that only we truly understand. And never, ever have sex.

Though I might not have realized my true sexual identity — or lack of sexual desire — for longer than I’d like, I realize now that I’ve always subconsciously looked for the Hans who didn’t want me to be their Leia. The ones who would let me be their Chewie.

In my 20s, I found a Han to have epic shenanigans with, and I introduced him to my sister—his Princess Leia. Twenty-five years later, and we’re still riding around in the Millennium Falcon having adventures, kicking ass. About a dozen years ago, I moved 3,000 miles away from them and found another Han—her name, Ann, was even close—and I’ve been her Chewie ever since.

What Han taught me is that you can be attracted to people and characters in many different ways. There will always be characters you can relate to and they can always tell you things about yourself to help you on your journey. You just have to listen.

This essay by A.J. O’Connell and Tamela J. Ritter appears in The Fandom Universe: … A Galaxy Far, Far Away, an anthology of essays and artwork about how the Star Wars fandom has changed lives, released Dec. 15. For more information, visit GoldenFleecePress.com.

A.J. O’Connell is a freelance journalist and author. Her first book, Beware the Hawk, was published in 2012. She has contributed to Book Riot and Geek Eccentric.  A.J. lives in Connecticut with her husband, her son, a dog, a cat and a fish that hates her. Her ideal day includes a lot of fiction writing, a lot of coffee and more comics than she can afford. She writes about writing and feminism at her blog, ajoconnell.com. Follow her on Twitter at @ann_oconnell.

Tamela has written novels, short stories and critical analysis of the fandoms of Doctor Who, Harry Potter and Star Wars (so far). Her website is tamelajritter.com and she can also be found on twitter @tamela_j.