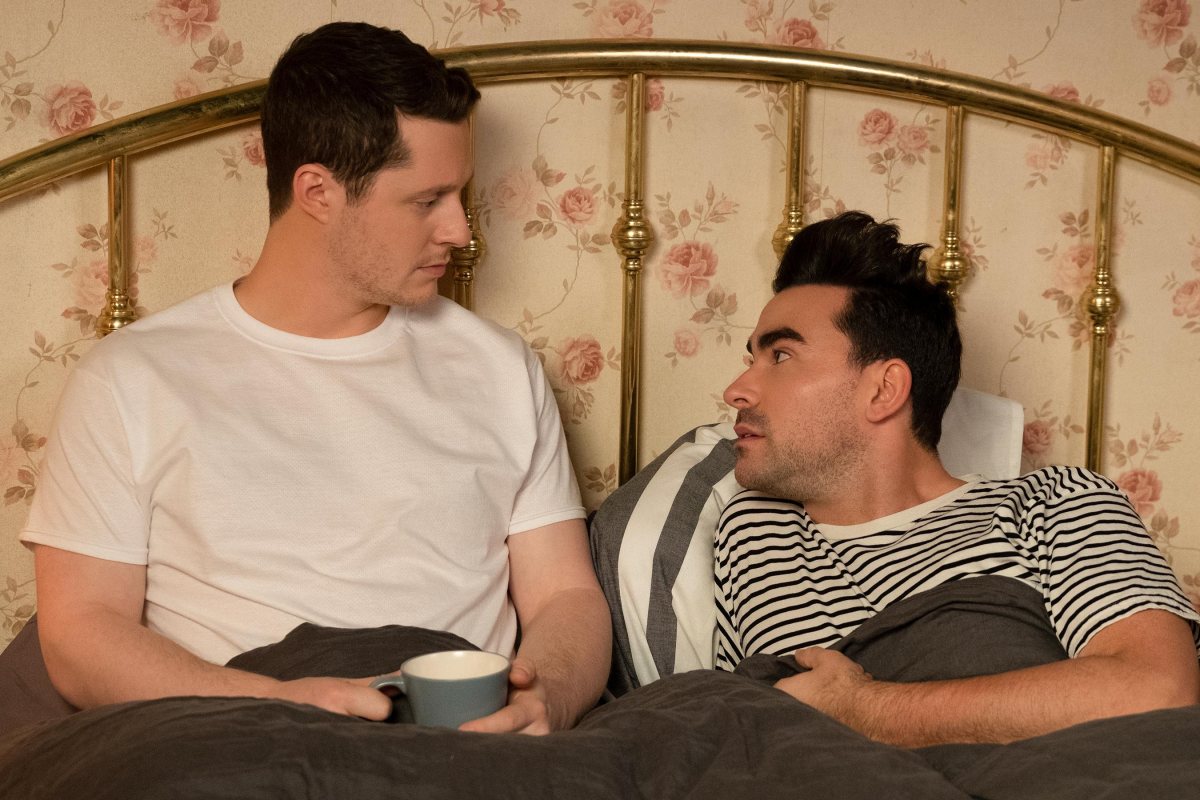 Schitt’s Creek is the surprising favorite comedy that has taken over our hearts. Following the lives of the Rose family when they lose their fortune and are forced to move to Schitt’s Creek, a town they bought as a joke, the show became a classic because even when the Rose family was at their worst, there was still something to love about Johny, Moira, Alexis, and David.

One of the most valued relationships on the show, though, comes in the form of David Rose (Dan Levy) and Patrick Brewer (Noah Reid). As the final season of Schitt’s Creek is airing, we keep seeing the preparations for David and Patrick’s wedding, and honestly, I’m not going to be okay.

I’m slightly behind on this season of Schitt’s Creek (and I’ll have to catch up before the finale on April 7), so I didn’t want to read Dan Levy and Noah Reid’s comments because I’m afraid of being spoiled, so I’m just going to point out what iconic movie poses Levy and Reid adopted in their Entertainment Weekly cover.

The iconic Molly Ringwald movie has been a beacon of hope for those of us who have felt unimportant in our families. Samantha’s (Ringwald) birthday is forgotten in the mix of her sister’s wedding, and she continues to feel like she’s just someone that no one particularly cares about. But then Jake Ryan comes into her life and makes her sixteenth birthday one that she’ll never forget.

So, making Levy and Reid pose as the iconic scene from Sixteen Candles for our pleasure? Thank you.

A movie made during World War II (which means there were specific Hollywood restrictions placed on movies and what they could or could not say), Casablanca is the love story of Rick and Ilsa. The most iconic scene in the movie, though, is at the end, when Rick tells Ilsa to flee without him, reminding her that they’ll “always have Paris.”

This is the scene that Noah Reid and Dan Levy brought to life, and it is truly one of my favorite movie moments of all time. The entire movie, you’re just rooting for them to figure it out, to find some way to be together, and in the end, Rick realizes that he cannot do that to Ilsa and lets her go, and that’s a level of love that goes beyond defying the odds to be with each other.

He was just a boy standing in front of a boy, asking him for a business license. Take a dive into how #SchittsCreek’s most triumphant romance was built with @danjlevy and @olreid: https://t.co/AnFr6IQRMY Story by: @shananaomi pic.twitter.com/rLE8L9JlUB

I, admittedly, do not love Notting Hill. It furthers narratives in movies that I don’t particularly love, and the “romance” of it is that the woman lies a lot and we’re supposed to be like, “Well, it changed the dynamic of romantic comedies!” so … not really my favorite. But what I would do is watch Notting Hill again if it were about David Rose and Patrick Brewer. Hell, I’d even watch a straightforward remake starring Dan Levy and Noah Reid.

Despite how I feel about Notting Hill, though, it’s a classic romantic film, which is the point of this photoshoot, and throughout all of these, all I can think about is how I want to watch Noah Reid and Dan Levy fall in love over and over again, in any movie or television show they’ll make with each other.

David Rose and Patrick Brewer are two characters who show us love in its most honest form. They’re just two men in love with each other, no matter what, and it’s absolutely incredible to see onscreen.