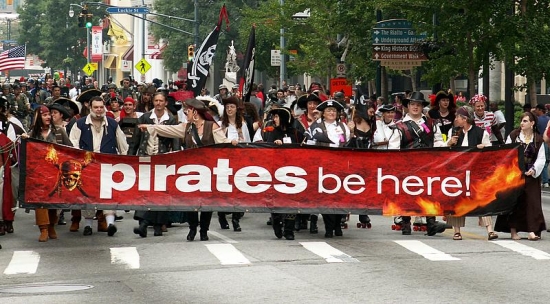 Yesterday, we reported that employees of several major movie studios were caught pirating files on BitTorrent. It seems Hollywood isn’t alone in its do-as-we-say-not-as-we-do pirating ways. TorrentFreak since revealed that the Big Three music labels, as well as government agencies, and even foreign parliaments were caught red-handed using BitTorrent. This is a little like being told not to smoke by someone while they themselves are lighting a cigarette.

TorrentFreak worked with ScanEye, a company that monitors BitTorrent, and the list of what these companies and agencies downloaded is extensive, but let’s focus on the more ridiculous downloads. Someone in the Universal Music Group grabbed an episode of Adventure Time, an employee of the U.S. Department of Justice fittingly downloaded The Bourne Legacy, and an IP address linked to the Department of Homeland Security downloaded a torrent titled “The.Good.Dinosaur.DVDRIP.XviD-ZEKTORM.” The Good Dinosaur happens to be the title of the Pixar movie due out May 2014. That’s some ambitious torrenting.

The culprits here are just employees of these agencies and companies, and people make mistakes, but when the people getting caught pirating work for the same companies that are going after average Internet users it just leaves a bad taste in everyone’s mouth.

(via TorrentFreak, image via leshoward)