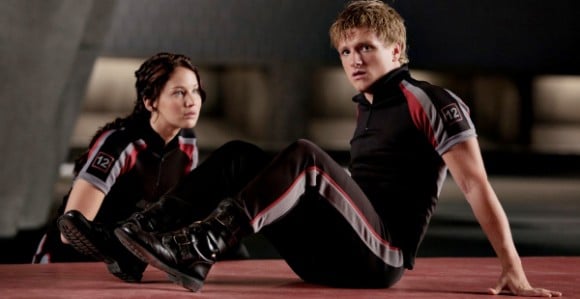 Gary Ross has his twin teenage girls to thank for the amazing job that is directing the adaptation of Suzanne Collins’ The Hunger Games. They were the ones who introduced the director to the grim society and the young girl who must fight to the death in front of them. Now he’s loving every second of his job, thrilled with its stars’ performances and can’t wait to get started on the sequel.

Ross wanted to make sure he got the coveted job. “He made his own mini-movie complete with film references and interviews with teenage fans of the book,” writes the LA Times. “He also employed a handful of visual artists to mock-up his vision of the futuristic world of Panem, where the story is set.”

You may remember Ross’ directing work from Pleasantville and Seabiscuit but he was also the writer of the Tom Hanks-driven Big in 1988. The L.A. Times’ Hero Complex got to visit post-production with the director of the highly-anticipated film where Ross was so excited he probably would have showed them the un-finished product if the studio allowed. They did, however, get a look at one scene.

Here’s how they describe it: “It’s a quiet scene between [Jennifer] Lawrence and her fellow “tribute” Peeta Mellark, played by Josh Hutcherson (The Kids Are All Right), the night before the annual ‘Hunger Games’ fight-to-the-death begins. The two protagonists contemplate what lies before them as two of the 24 participants in the battle, and a look comes over Lawrence’s face that convincingly telegraphs her character’s understanding of her grim future.”

“Every moment is like this,” said Ross. “She is so talented, it’s unbelievable.” Not just talented but apparently fun on set as well. Hero Complex said Ross’ iPhone “boasts a screen-saver picture from the set of the Lionsgate film — leading lady Jennifer Lawrence is wiping her nose on Ross’ sleeve while the two are standing in the middle of a North Carolina forest.”

“I don’t know how I ever could have done this movie without Jennifer,” said Ross. “I’m not sure I would have done it without her. She’s that important. More important than any other piece — including me. She’s Katniss Everdeen.”

Ross spent four months working with Collins on the final script of the film and wanted to make sure his approach was making sure they didn’t give the audience anything Katniss didn’t know. “If you look at the opening of [Saving] Private Ryan, you are so in the point of view of those guys and there is a whole world swirling all around them,” said Ross. “You are learning that geography as they are learning it.”

As for the story of The Hunger Games, Ross said, “I thought the idea that the way we amuse ourselves could devolve into this hideous spectacle was really fascinating. Plus it has all the things I love in the movies: technical challenges, size, spectacle, amazing narrative drive. And it has a lot on its mind about where we are and where we may be headed as a culture.”

And yes, Ross is already at work on The Hunger Games sequel, Catching Fire, with Slumdog Millionaire screenwriter Simon Beaufoy. Ross said, “Maybe I’m at the point where I just have grown to love my job.”