A brave knight and a prince share pumpkin pie, fall in love. 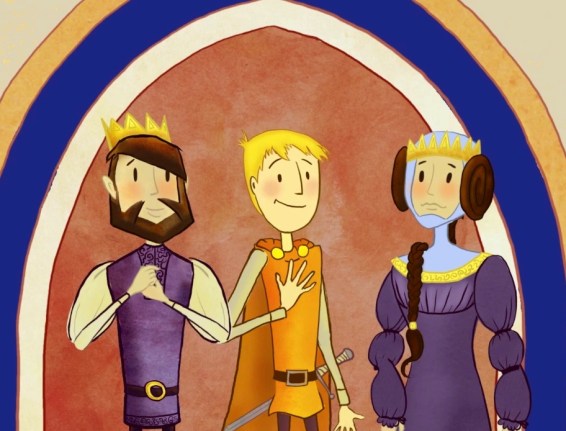 Hulu recently released a short animated film The Bravest Knight Who Ever Lived, based off a children’s book by Daniel Errico and illustrated by Mo Qovaizi. Beautifully illustrated and animated by Ida M. Schouw Andreasen, the short stars the humble and kind pumpkin farmer, Cedric, who embarks on a dragon slaying adventure to save a pair of royal siblings. When the trio returns to the kingdom, the princess offers to marry Cedric. It sounds like a pretty conventional plot, but Cedric must perform one last act of bravery. He refuses the princess’ offer, and tells her he values her friendship. He then turns to the prince, confesses his love, and proposes marriage.

The animation is adorable, and you can’t help but root for Cedric. He’s kind, brave, and he’ll make you pumpkin pie! It’s great to see LGBTQ characters as protagonists in children’s media. While there are some great stories out there, like Neil Gaiman’s Sleeping Beauty X Snow White children’s book we can definitely have more LGBTQ visibility.

Errico told Buzzfeed Books that he found Hulu’s readiness to adopt the story “heartening” and discussed the importance of positive LGBTQ representation in media:

“I wrote this story to give children a fairytale ending that exists in the world around them, but is not shown to them,” he wrote. “I’d like for children to have every advantage possible towards accepting themselves and others as they grow. Introducing multi-dimensional gay protagonists to tales in a positive way doesn’t change the basic themes of courage and love, but may hopefully one day encourage understanding.”

The response, he says, has been overwhelmingly positive and hopeful.

(via Buzzfeed, Image via Advocate)