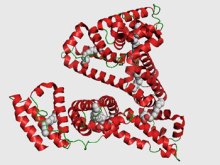 If you have donated blood to the American Red Cross even once, you already know what high demand there is. Thankfully, blood is somewhat of a renewable resource when we harvest it from healthy people, but getting healthy people to consent to having their blood harvested is the hard part. Solution? Artificial blood.

Granted, artificial blood is not a new idea, in fact, it’s been in the works for a while now, but it looks like scientists may have made a breakthrough when it comes to artificially producing a specific protein called human serum albumin, or HSA. HSA, which is used in vaccines and to treat shock, burns, and liver injuries, can now be harvested from rice plants and in concentrations higher than any previous synthetic approach.

Again, conning plants into producing HSA isn’t exactly a new idea either, the trick is, as published in a recent paper on the subject, to get the plants to grow the HSA in their seeds, which are a veritable hotbed of protein. The new process has produced yields of 10% HSA, the highest on record. The icing on the cake is that the HSA produced this way has, so far, proven to be none the worse for the wear and functions like the human-produced variety.

Of course, medical innovation is a slow process, so it’s not like this will start going into effect tomorrow or anything. If all goes well, the rice HSA should be ready for clinical trials sometime in the next two years, and if all that goes well, it might take off in medical use, taking some of the pressure off the rest of us bloodbags. Granted, this isn’t totally replacing blood, HSA is only one use of donated blood, so fear not if you like occassionally trading some of your blood for Dunkin’ Donuts coffee. You’ll still be able to do that for a while.

Relevant to your interests in blood