How To Train Your Dragon 2 Review: Anything But Toothless | The Mary Sue

How to Train Your Dragon 2 is Anything But Toothless

Maybe Daenerys should have watched this movie. 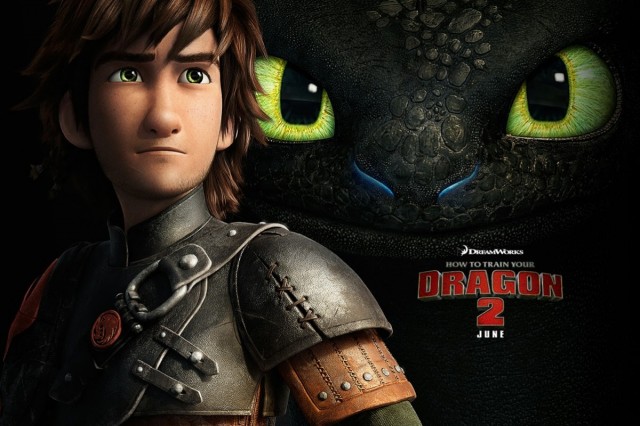 The sequel game, especially when it comes to high-flying summer fare, is a dicey one. Prone to feeling superfluous, or like too much of a departure from the original, the sequel to such a beloved film as the soaring How to Train Your Dragon from 2010 could have easily fallen into disaster. Instead, returning writer-director Dean DeBlois has risen to the challenge.

HTTYD2 creates an exciting, sometimes moving, and overall stunning film that keeps the action coming without exhausting its goodwill with viewers. Full of beautifully composed visuals and flowing, natural animation, HTTYD2 wastes no time in wowing the senses while still keeping its emotional moments firmly on the ground. It’s quite a trick to witness, and one that – but for a few small bumps – is a thrilling ride.

It’s been five years (by the film’s own reckoning) since we last laid eyes on the fictional Island of Berk, and much has changed. Once bitter enemies, the Vikings and dragons have made more than a truce, and are cohabiting together in peace and joy. Hiccup (voiced by Jay Baruchel) has grown into an adventurous young man, traversing the skies with his Night Fury, Toothless, in search of new lands and dragons. But trouble is coming to their little isle, as a fearsome warlord named Drago Bloodfist (Djimon Hounsou) and his dragon-trappers head their way. Now the young dragonmaster must contend with this new enemy, as well as the mysterious Dragon Rider, a dragon rescuer who lives in a hideout made of ice with hundreds of dragons, and may hold an answer to a riddle from Hiccup’s past.

Here there be dragons…and SPOILERS.

HTTYD2 is gorgeous to look at, even more so than its appealing predecessor. The intervening years have brought about new innovations in texturing and modeling, and the team at Dreamworks has taken full advantage of all they can do to make the surfaces of their 3D world feel like something, as though you could reach out and run your hands over them. The world they’ve created strikes a hard balance in terms of composition and color; splashed with brightness without being garish, earthy without going drab. Equally of interest is the ability to maintain a sense of scale. HTTYD2 is nothing if not a fan of the wide shot, whether it be Hiccup and Toothless soaring through a bank of clouds, or facing off against a massive alpha dragon. The film is great at establishing epic size and distance, making the world feel truly expansive.

As complex as the images are, the character relationships and narrative arcs feel natural and unforced. Rather than telling us that things are a certain way, the film makes sure to show us, say, the relaxed nature of Hiccup and girlfriend Astrid’s (America Ferrera) bond, or his strained but loving rapport with his father, Viking chief Stoick the Vast (Gerard Butler). Hiccup has a clear journey here, from the naïveté of thinking he can talk Drago down, to his ultimate failure and questioning of his place in the world. The perils of self-identifying to the extent that you engage in a dangerous fool’s errand is a heavy theme compared to most all-ages movies out there. But then, the How to Train series hasn’t, of yet, shied away from darker material, be it Hiccup losing his foot at the end of the first movie’s battle, and spending the rest of his life with a (admittedly very cool) prosthetic, or having to live with the guilt that his father died for his sake and, possibly, his ego. It’s a refreshing change from cross-generational movies that either dumb down their content, or let the better parts of the story fly over kid’s heads. Equally as important is that it introduces audiences to a hero living with a disability, without making it the focus of Hiccup’s character.

There are three main speaking roles given to female characters in HTTYD2; Astrid, Ruffnut (the hilarious Kristen Wiig), and Hiccup’s long-lost mother Valka (Cate Blanchett). Wiig’s Ruffnut in particular provides some unexpected and welcome moments by displaying examples of the heterosexual female gaze on film, as she openly and longingly ogles trapper Eret (Kit Harington).  (The general lack of the female gaze and expression of female desire in almost any recent film could comprise an entire essay unto itself). All three women are substantial contributors to the meat of the action, with Mom herself given a chance to face off against Drago one-on-one. Yet their development as characters often takes a backseat to the father-son dynamic that rules the drama of the script.

Valka is an interesting figure, at once mysterious and wild, while also warm and full of reflection – yet her interactions with Hiccup leave something to be desired in their reasoning. That she felt she needed to stay away for 20 years, though a good opportunity to engender pathos, is one of the weakest parts of film, leaving me both unconvinced that her departure was necessary, and unwilling to forgive her as swiftly as her son does. Narrative expediency leaves more ambiguous emotional content behind here, as both Hiccup and Stoick rush to re-establish their ties with Valka. In a film that deftly handles some serious moments, it’s the one thing that, for me at least, didn’t ring true.

Speaking of deft handling, it is worth pointing out that HTTYD2 contains a small, easy-to-miss moment when one of its lead secondary characters comes  out as gay. As promised in news from Cannes, right-hand-man to the chief Gobber (Craig Ferguson) makes a subtle intimation of his sexuality, but it’s a barely-there hint. Especially given the contentious nature of representing LGBT people in ‘family’ entertainment (as though us in the LGBT community don’t have families), this was a plum chance for Dreamworks to take a stand. Instead, if you’re waiting for it, you’re going to be disappointed. Sorry, Dreamworks, but you’ll have to take a page from Laika, and do better than that.

HTTYD2 does so much right that it’s hard to fault it for its minor flaws. Its artful landscapes, thoughtful design, and touching story make for the sort of animated film that sticks with you after you’ve left the theater. There will always be room for improvements, and always the space to ask for them, be they social concerns or tightening up writing. All the same, the film provides ample excitement, and presents a cast of characters you can genuinely care about. Given the film’s opening weekend success (it was #2 in the US, and earned more than the original’s first-weekend box office), as well as the lucrative nature of the Dragon franchise on television, a second sequel is most likely on the way. In this rare instance, though weary and wary of trilogies, I can honestly say I’m interested to see where the winds take the series next.

Zoe Chevat is a writer, animator, and illustrator who attended the CalArts MFA Program in Film and Animation. In addition to writing for The Mary Sue, she also contributes to Bitch Magazine Online. She comes from New Jersey and lives in Los Angeles, and, after many years, still finds that second part incredibly strange. Follow her on Twitter @zchevat, or on Tumblr at http://justchevat.tumblr.com.

How to Train Your Dragon 2review