How to Kiss, 1942-Style, According to LIFE Magazine 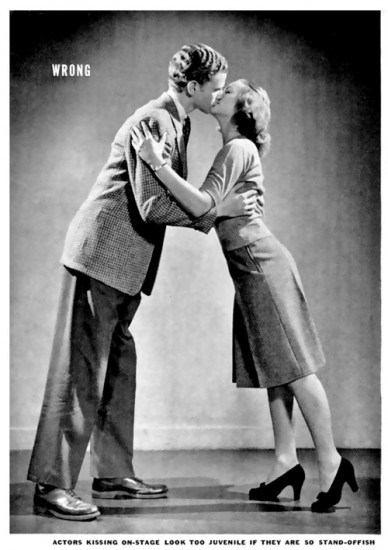 Ahhh, ye olden tymes. Back when romance was romance, and kissing was third base. (And “necking” was a home run!) Back in the early 1940s — 1942, to be exact — LIFE Magazine took it upon itself to stage an instructional photo spread on the do’s and don’ts of proper kissage. Because there are right ways to kiss someone, and there are perilously wrong ways. (Aunt Jamie can also tell you that there are just some people who shouldn’t put their mouths on anyone at all.) So, how does LIFE want us to kiss people? Come inside, enjoy the view!

Above is a good example of how people who are afraid of kissing kiss each other — with their genitals as far away from each other as possible, in case the slightest peck causes the slightest unexpected erection. This is the wrong way to kiss, even back in 1942, if you’re trying to convince the person you’re kissing that this kiss was voluntary.

Below is the corrected version. 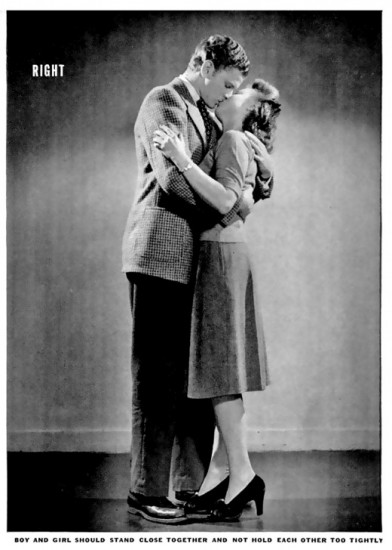 Indeed, standing “close together” while not holding on “too tightly” expresses just the right amount of interest without veering recklessly into autoerotic asphyxiation. Or intercourse.

Now that we’re done with our “standing series,” let’s move on to some seated positions. Here is not how to kiss someone while seated: 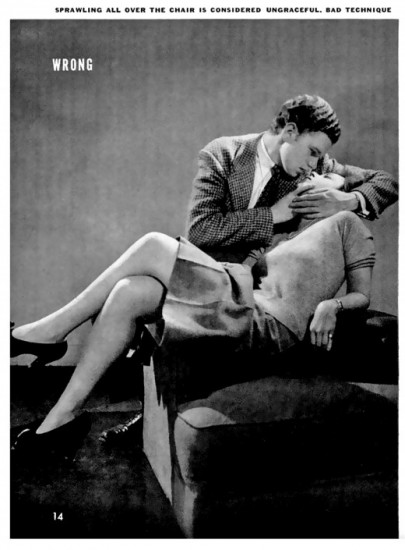 Here, we see our gentleman has apparently tripped and fallen down beside a couch. This is the only logical explanation as to why he would be kneeling next to a couch where his partner is seated, but on the arm of said couch and not the traditionally accepted seating area on the cushion. By not joining the female on the couch (where there is plenty of room, unless she is suffering from Rose DeWitt-Bukater Disorder), he is giving her the impression that he is not that interested in sharing the space with her, and is only interested in her mouth. Ladies: Beware of men who are only interested in your mouths. Next thing you know, he’ll be asking you about teabagging before you’re prepared for such a level of intimacy.

But mostly, the double-handed grasp of the male, as seen here, is sending mixed signals. While kissing someone, don’t appear to be attempting to snap his or her neck.

Here is the corrected version: 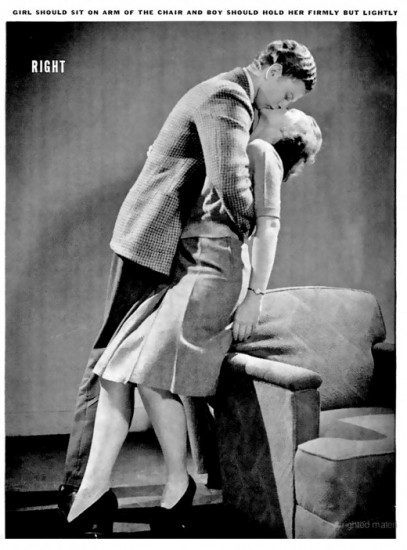 Ahhh, now here is a logistically and ergonomically sound display of affection. The male — with his height advantage — can comfortably lean in for the kiss while his partner is seated (conveniently instead of confusingly, as shown before) on the arm of the couch. Now, she has ample room to swoon and/or escape should she feel his burgeoning erection.

It goes without saying that none of this should occur outside the confines of marriage. And only if you plan on having babies, you dirty little horndogs.