How Do You Define Humanity in Comic Books? 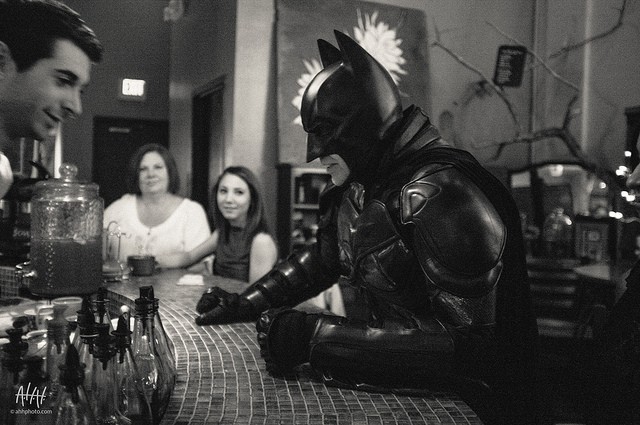 Comics are the realm of dreams, wish fulfillment, and aspirations. You might imagine that this realm would be filled entirely with super-powered superbeings. And yet, within every single comics title there are humans that take on varied levels of importance. Some are heroes, some are villains, some are humans-in-distress, and some amass huge followings just because (any Dr. Peter Corbeau fans here?). In a realm where so many are capable of such amazing feats, how do we define humanity?

Who Are the Humans?

Things already get a bit sketchy when it comes to identifying humans in comics. When asked to name a comics-universe-human in an informal survey of 70 participants, responses were all over the board. Respondents classified the following as humans:
• Unpowered unskilled humans: humans with no superpowers and no notable fighting or technical skills (e.g. Mary Jane, Lois Lane)
• Unpowered skilled humans: humans with no superpowers that have highly trained fighting or technical skills (e.g. Black Widow, Nick Fury)
• Item-powered skilled humans: humans whose powers are enabled by some external item and only possess their powers when in contact with this item (e.g. Batman, Green Lantern, Iron Man)
• Power-acquired skilled humans: humans who received their powers through an external cause (typically chemical or physical) or developed magical powers on their own. (e.g. The Flash, Captain America, Constantine)
• Human hybrids/mutants: humans whose powers are genetic, either through genetic mutation or a single-nonhuman parent (e.g. Aquaman, Captain Marvel, Raven)
• And some otherworldly humanoids made in there as well (Superman, Wonder Woman). Strangely, there were very few mentions in the survey of human villains (2.8% overall), of which there are many.

With such a broad range of humanity, it is likely that the comic book definition of humanity is not driven by (comic book) biology alone. 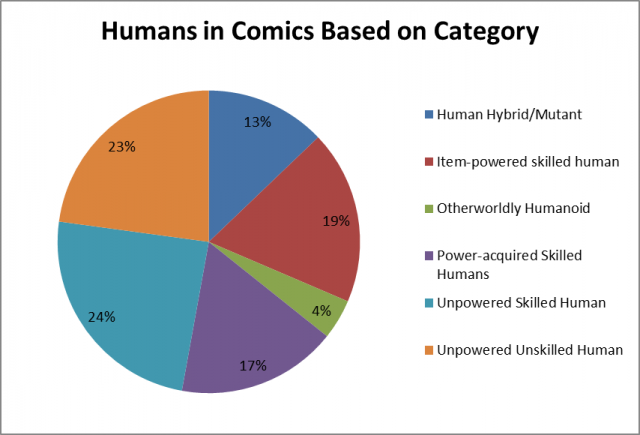 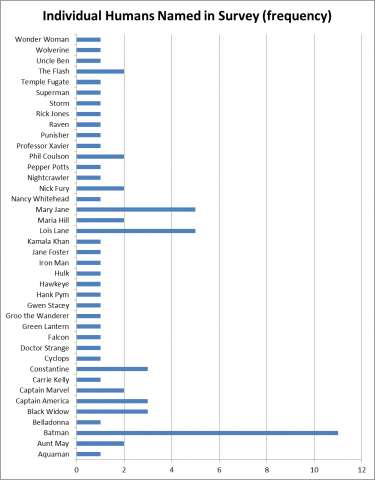 Batman and Villains
Batman provides us an interesting lens through which to view humanity. He was the most frequently named character in the survey and is one many comic readers and film-watchers aspire to be: someone with the resources to do pretty much anything he wants, and chooses to fight for the little guy. This is maybe what makes him such a memorable human—we’d like to think that in the same situation, we would do the same thing. His back story also contains quite a few human elements: he suffers a horrible tragedy at a young age and learns to cope, he falls in love and has his heart broken quite a few times, and suffers some gigantic setbacks like getting his back broken by Bane.

Batman lives in a world filled with humans, be they unpowered unskilled humans like Commissioner Gordon, unpowered skilled heroes like Robin, or unpowered skilled villains like the Joker, Catwoman, Harvey Dent, Ra’s Al Ghul, Scarecrow, Harley Quinn, etc. the list goes on. With so many human villains to choose from, survey respondents only named one (Temple Fugate, who’s not even a well-known villain outside of the Animated Series). How do we interpret this? Maybe we don’t want to acknowledge that villains can be human; maybe in becoming villains, they lose a bit of their humanity.

One of the main conceits of the X-Men is whether mutated humans are in fact humans, and how other humans can act so inhumanely toward them. The title is filled with unpowered skilled heroes like Moira MacTaggart and Dr. Peter Corbeau, unpowered skilled villains like Bolivar Trask and William Stryker, otherworldly humanoid races like the Shi’ar and Kree, and of course human hybrids and mutants.

It’s very clear that genetics are not predictive of heroism or villainy, as mutants and humans alike are capable of either. Genetics are not predictive of appearance either; while Beast and Mystique look vastly different than Jean Grey and Magneto, the same X-gene is responsible for their appearance. The question of humanity thereafter becomes one of action, as Wolverine, Storm, and Captain Marvel showed up in the survey responses. All three are unassailably heroes, and their stories contain some very human elements; they come from places you could find on a map (Canada, Harlem, Boston), have had jobs (Canadian government operative, Air Force intelligence), have fallen in love (Mariko Yashida, Michael Rossi, Forge), and all have lost their powers at some point and had to cope.

The Avengers and Representation

The Avengers, both through the comics and the MCU, has positioned unpowered skilled humans as equals and sometimes even superiors to item-powered skilled humans, power-acquired skilled humans, and human hybrids/mutants, and otherworldly humanoids. Nick Fury, Black Widow, Hawkeye, Mockingbird, Maria Hill, Falcon, and Phil Coulson have all been vital members and leaders of the team. However this balanced representation hasn’t seeped into the merchandising. In what seems like a failure on the part of distributors like Disney, a decision was made to feature Iron Man, Hulk, Thor, and Captain America on most merchandise.

However, given that most unpowered skilled humans involved with The Avengers are super spies, assassins, S.H.I.E.L.D. agents, and occasionally villains, this may not be a decision that’s vice unpowered humans or women. In fact, most of these characters have backgrounds they’d prefer to be kept hidden. Thor, Iron Man, The Hulk, and Captain America have human elements within their rich back stories: all have suffered pretty huge setbacks (deemed not worthy for family, Asgard, and Mjolnir, daddy issues, anger management issues that hurt the ones they love, being buried in ice and everyone they know having died) and all have fallen in love (Jane Foster, Pepper Potts, Betty Ross, Peggy Carter). With the latest Avengers film, we started to see richer and more human backstories for Black Widow and Hawkeye (the Red Room, Laura Barton and family), so maybe we’ll see a change in the merchandising.

Usefulness
Survey respondents were also asked to rate the usefulness of their selected human within their comics titles on a scale of 1-5 (Completely Useless to Very Useful). This was a purely subjective rating based on the respondent’s own definition of usefulness.

While the scores of the powered or skilled groups are not significantly different, the Unpowered Unskilled group wound up with the lowest scores by far. The humans in this category are friends, girlfriends, and family members of our main heroes. If we look a little bit closer at this category, we see that there’s a significant reason for this low overall score.

The girlfriends of superheroes, like Mary Jane and Lois Lane, wind up being damsels-in-distress more often than not; whatever emotional support they might provide to their partners becomes subsumed by their constant need to be rescued. This is in sharp contrast to friends and family members like Uncle Ben, Aunt May, and Nancy Whitehead, who are often credited with raising a superhero or being their emotional support.

Ultimately, the definition of humanity in comic books seems to be a subjective one. In explaining their survey responses, participants cited very human weaknesses (e.g. claustrophobia, coping with personal crises), philanthropic efforts, (e.g. doing what’s right, coming to the aid of others in need, supporting their fellow crime-fighters), and reliance on more human skills (e.g. brains, technology, science, tactical awareness, weapons skills) as the reason for their selections. When thinking about humanity in comics, we might just ask ourselves a single question—who do you relate to?

Eugenia works as an online product manager for an academic publishing company. Her background is in cognitive science, specifically in a field called psychophysics where she studied human motor learning. She is also a bellydancer. You can follow her thoughts on art, science, and being really busy at https://personwhodoesathing.wordpress.com/.