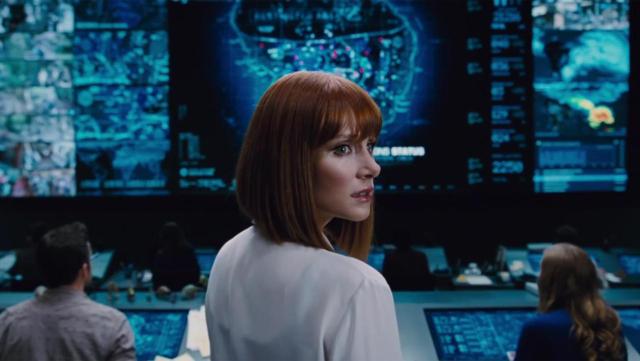 Jurassic World director Colin Trevorrow made some rather intriguing comments about future sequels (the first currently being written and slated for release on June 22nd, 2018). When asked about Bryce Dallas Howard’s character, operations manager Claire Dearing, he said, “Claire is the one who evolves the most over the trilogy; it’s her story that mirrors this changing world.” I’ve come to the defense of the character recently, this awkward (at first) yet ambitious woman whom gets in touch with her inner hero (in those glorious heels I might add), so I’m excited at the prospect of seeing her journey continue. The Jurassic Park franchise has never been about the characters, but with Claire as the central figure moving forward, Jurassic World II and III (and beyond) have an incredible opportunity to say something new. I’ll explain.

While we loved the adventures of Dr. Ellie Sattler (Laura Dern), Dr. Alan Grant (Sam Neill), and Dr. Ian Malcolm (Jeff Goldblum) in the original Jurassic Park, these characters were thrown into a situation beyond their control. Like a disaster movie, our heroes scraped and scrambled through the narrative, fending off hungry raptors, rexes, electrical fences, and even Newman himself. The film was a morality tail, and a warning—our heroes pointing fingers at the men whom had science’d too far. As those characters made it out alive, they were only involved in the subsequent sequels (The Lost World: Jurassic Park and Jurassic Park III) because they were either manipulated into going or were outright kidnapped, meeting face-to-snout with these terrible lizards still putzing about (because life finds a way, of course, and so do movie sequels). These first two sequels continued with the themes of the original but felt like cynical exercises, because the protagonists themselves didn’t feel any culpability for what was happening around them. At least Jurassic Park had the “Oooh,” the “ahhh,” and then the running and screaming.

Jurassic World, being set in the fully operational theme park that John Hammond always dreamed of, attempted to rectify the nihilistic exhaustion of the previous sequels. At the center of it all was Claire Dearing, the operations manager who keeps the place running until it all falls apart. By making Claire implicitly part of the plot [she started the evacuation of the island; she got hunky raptor geek Owen Grady (Chris Pratt) to come along with her to rescue her nephews; she it is essential to continue her story into the next one. At the end of Jurassic World, she doesn’t go off and have kids; she leaves with Owen to go have more adventures. She’s tied to these dinosaurs in a way that previous franchise characters haven’t been before, and I think she feels responsible for ushering in this brave new world where dinosaurs and man actually co-exist. (Woman inherits the Earth, anyone?) So now, Jurassic World’s story is her story. What does this mean for Jurassic World II?

Speaking with Wired, Trevorrow mentioned, “[It will not be] just a bunch of dinosaurs chasing people on an island.” My bet? It’ll be people chasing dinosaurs. Flash forward to five years after Jurassic World. Dinosaurs are somehow spreading across the planet, and Claire has assembled a team of “dino wranglers” to go around the world and deal with problems caused by our scaly (and feathery!) friends on the loose. Her team includes Owen, of course, dino hipster Lowery (and Vivian too because Lauren Lapkus is the best), and returning from the depths of the Jurassic Park franchise, Julianne Moore as Dr. Sarah Harding from The Lost World. So Jurassic World II could essentially be Ghostbusters, but with dinosaurs. In light of Bryce Dallas Howard’s comments in a recent interview, I also think any new Jurassic World sequels will use this possible globetrotting element as an excuse to bring back any and all franchise heavy-hitters. Perhaps Jeff Goldblum’s saucy chaotician Ian Malcolm shows up at the end of Jurassic World II (a la Geoffrey Rush’s Captain Barbossa in Pirates Of The Caribbean: Dead Man’s Chest) to help take on whatever challenges Claire and company face in Jurassic World III. Please make it so.

Jurassic World reawakened the dormant Jurassic Park franchise with the first sequel since 2001’s Jurassic Park III and is currently the number one movie of 2015 and the number three movie of all time. Your mileage may vary on how much pleasure you got from it, but make no mistake that Claire Dearing is a new kind of character in this franchise and presents wonderful new opportunities to reinvigorate this old dinosaur in future Jurassic World sequels. By focusing on a person with a complex relationship to the dinosaurs equaling the film’s premise, we may learn not only how life finds a way, but why as well.

Steven Ray Morris is a Los Angeles-based author and an okapi in his next life. He cohosts a podcast about cats called The Purrrcast and his book about the Jurassic Park franchise, Molding A Jurassic Universe, was released earlier this summer via Thought Catalog Books. You can find him on Twitter @StevenRayMorris.