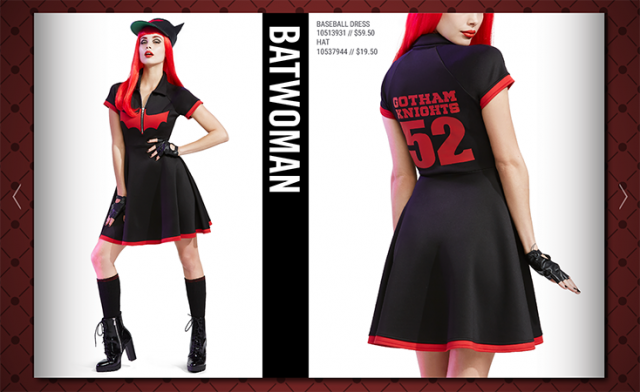 If you wanted to cosplay as the DC Comics Bombshells version of Batwoman, Wonder Woman, or Harley Quinn, but you don’t know how to sew, you’d better check out to this limited-edition fashion line at Hot Topic. The store has just put up several almost-accurate versions of the costumes. They’re not exactly like the comic book designs, but they’re so close to the real thing that only the most hardcore fan would notice the differences.

The original DC Bombshells alternate-history comics took inspiration from cosplayers, according to Marguerite Bennett (one of the writers for the series, which has a largely female creative team). It seems only fair that the series would get a tie-in fashion line that would give more people the chance to wear these amazing outfits, even if they don’t have a sewing machine and a lot of free time for crafting.

The full line-up includes seven separate items: the Batwoman dress (pictured above), the Batwoman baseball cap, a Poison Ivy dress (doesn’t look anything like the comics, but it’s still cool), Harley Quinn’s brown leather jacket, a Harley Quinn-themed leather bag, a Wonder Woman top, and a pair of Wonder Woman shorts. Let’s have a look at the entire collection, shall we?

(via Pajiba, images via Hot Topic)