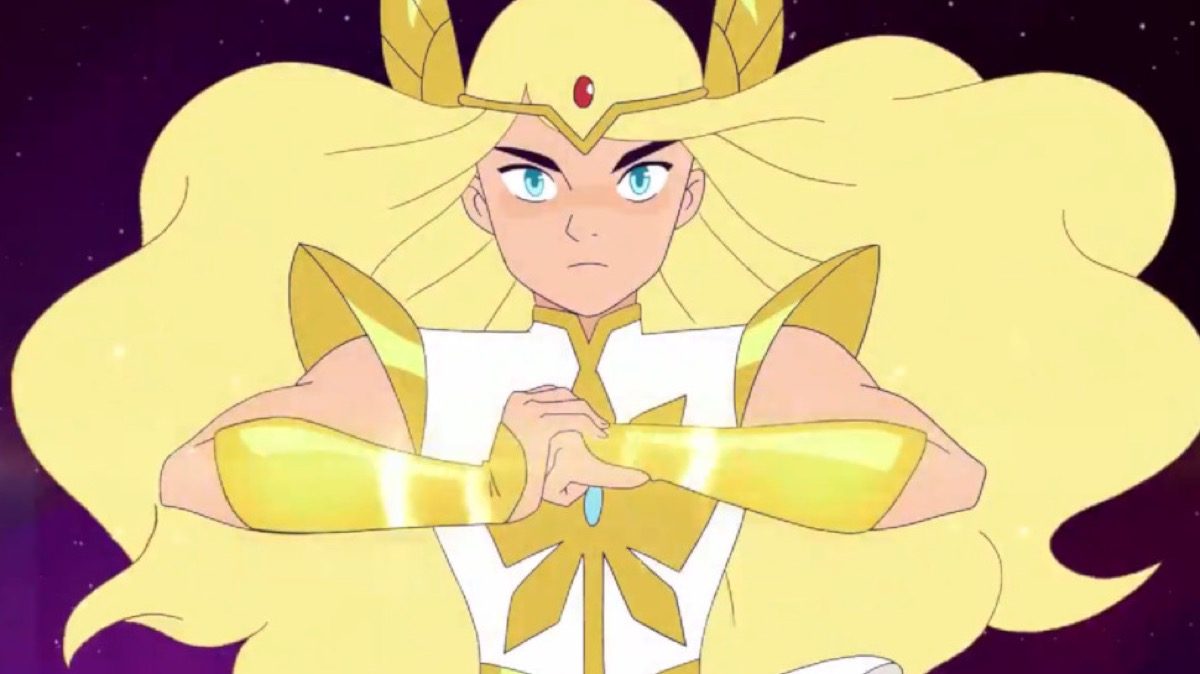 As a child of the ’80s, I have a particular affinity for the cartoons of my generation. The two that had the greatest impact on me personally were Jem and the Holograms and She-Ra: Princess of Power. Jem has already gotten a modern reboot from Universal, and it was certainly not truly outrageous—in the good way, at least. She-Ra, meanwhile, is being rebooted by Netflix and set for release this November. It’s too soon to tell if the Princess of Power will fare better than Jem, but I certainly hope so.

The original Jem and the Holograms was surprisingly progressive for its time. It featured a diverse group of characters, carried a strong feminist message, and also rocked pretty hard. Seriously, I can’t remember what I ate for breakfast yesterday, but I can sing you the lyrics to most of the songs featured in that series. Jem and the Holograms was a celebration of both female friendships and female empowerment, not to mention music—not bad for a show created solely to sell Hasbro toys.

I was overjoyed when the Jem reboot was announced, but that excitement quickly turned to disappointment upon seeing the movie’s trailer. The film itself did nothing to prove my initial apprehension misplaced. Gone was everything that made Jem so great.

It would’ve been difficult to translate Synergy—Jem’s holograph projecting computer—to the big screen. No argument there. However, Jem and the Holograms doesn’t really work without any actual holograms. The movie did bring in an ersatz Synergy, but like most of the film itself, all it shared in common with the original was a name. The pale imitation did grant us a single hologram, but it served little purpose, leaving fans wondering why it was included at all.

No holograms also meant no love triangle between Jem, Jerrica, and Rio. Was it crazy that the original triangle was technically only between two people? Absolutely. Was it also incredibly compelling? Definitely. It gave the show the opportunity to explore the complexities of identity. Aside from that, it raised vital questions about what it really means to be in love. Pretty deep stuff for a musical kids cartoon with strange sci-fi undertones.

I’m not trying to claim that adapting this series for modern audiences should’ve been easy, but why adapt Jem and the Holograms at all if you’re not going to lean into all the things that made it unique? Yes, the premise is over-the-top, but in trying to ground the movie, the writers failed to keep the cartoon’s essence intact. Not even the central themes of the original managed to shine through. Gone was the message of empowerment, instead replaced with a sanitized story about the corrosive effects of fame.

Also notably absent from the film was the primary antagonist of the series, the Misfits. The rival girl group brought necessary tension to the show, and the dynamic between these two bands had an important place in the overarching narrative. Stormer, in particular, had real depth, and her evolution introduced shades of grey into what would’ve otherwise been a very black and white world.

Without the Misfits, Jem lost its main conflict, but also the opportunity to truly explore what it is that bonds women together. Sure, the ending teased the Misfits, but by that point the reveal did little, save remind the audience how much better the movie could have been.

As upsetting as all of this was, the most disappointing aspect of Jem and the Holograms was our titular heroine. Cartoon Jerrica ran the Starlight House, a foster home for girls in need. Not only was she forced to deal with her father’s tragic death, but she also had to wrest control of his company, Starlight Music, from the villainous Eric Raymond.

Side note: How did they even convince Juliette Lewis to star in this movie? In the film, Jerrica gets signed to a record label, but a story in which she fought to reclaim the company that was rightfully hers would’ve made for a far more interesting movie—not to mention that this particular movie change loses just about everything that made Jerrica such an awesome role model for young women.

It’s also worth noting that although Jem and the Holograms was undeniably produced with the desire to sell toys, the main architects of both the show’s story and sound were women. Jem ran from 1985–1988 and was created by Christy Marx, who had previously worked as a staff writer for Transformers and G.I. Joe. Anne Bryant, who was also responsible for the Transformers theme song, composed the music for the show’s original tunes—all 151 of them. Barry Harmon wrote the lyrics. Bryant chose the singers and musicians herself and was responsible for shaping the Holograms’ pop songs, the Misfits’ punk sensibilities, and later, the Stingers’ hair metal sound.

Sadly, the film couldn’t even compete with the cartoon in terms of basic music composition. Aubrey Peeples can definitely sing, but the songs were just not very good. Music was central to the cartoon. In an effort to capitalize on the success of MTV, Jem and the Holograms featured at least three songs per episode, usually with an accompanying music video. Even the dolls were sold with cassette tapes containing the show’s original songs, which I most definitely spent an inordinate amount of time singing along to. The movie not only failed to capture Jem’s spirit, but also could not replicate its musical magic.

I adored She-Ra: Princess of Power almost as much as Jem and the Holograms, and I have the costume pajamas, complete with cape and footie boots, to prove it—not to mention Swift Wind and the Crystal Castle. The recently released Netflix trailer for She-Ra and the Princesses of Power has left me feeling optimistic about the reboot, and I have faith that Noelle Stevenson (Lumberjanes) is the right choice to helm the project. Sure, it’s a kids’ cartoon, but this adult will be tuning in.

Despite the fact that She-Ra’s slick redesign looks amazing, there has been a litany of complaints from grown men who think that the young hero isn’t sexy enough. First of all, it’s fairly safe to say that Adora is a teenage girl—as she was in the original cartoon—so why not actually draw her like one? Plus, if everyone’s being honest, her new costume is far more practical than She-Ra’s trademark bustier. J. Michael Straczynski, who co-created the original character, has even stated that She-Ra was never created with “the ideal woman” in mind and that she was “considered a warrior, first and foremost.”

Spinning out of He-Man and the Masters of the Universe, She-Ra: Princess of Power aired for only two seasons from 1985-1986. Like Jem, it featured a strong feminist message, especially for the time. For one thing, She-Ra was every bit as powerful as her twin brother. However, her alter ego was distinctly cooler. He-Man reverted back to being Prince Adam, who was basically a whiny, spoiled coward. She-Ra, on the other hand, was a warrior either way. Princess Adora had been kidnapped as an infant by the evil Hordak and was then trained to become the head of his army. Aside from that, She-Ra’s entire posse was mostly comprised of women. Yes, there was Bow, but we all know that he was the damsel in distress of the piece.

Another impressive aspect of She-Ra was how consistently it passed the Bechdel Test. As much as I love Jerrica/Jem, she spent a whole lot of time lamenting the love triangle of her own making. The show was also incredibly fashion obsessed. However, She-Ra and her gal pals had more important things to discuss, such as restoring the matriarchy to Etheria. Let’s not forget that the rebellion She-Ra headed up was predominantly female, seeking to supplant Hordak and return the rightful queen to her throne.

Until the series drops in November, it’s impossible to say how She-Ra and the Princesses of Power will turn out. No one could claim that the original series was flawless, in particular suffering from a major lack of diversity—which, judging by the trailer, is no longer an issue. In addition, She-Ra’s costume change, as well as the fact that she looks her age, is already a step in the right direction.

Plus, the animation is absolutely gorgeous. Adora’s transformation left me feeling not only nostalgic, but also excited that another generation of girls will be introduced to this amazing heroine. I’m looking forward to a new interpretation of the beloved characters that I grew up with. “For the honor of Greyskull,” I’m hoping She-Ra and the Princesses of Power is as badass as I want it to be.

NetflixShe-RaShe-Ra and the Princesses of Power