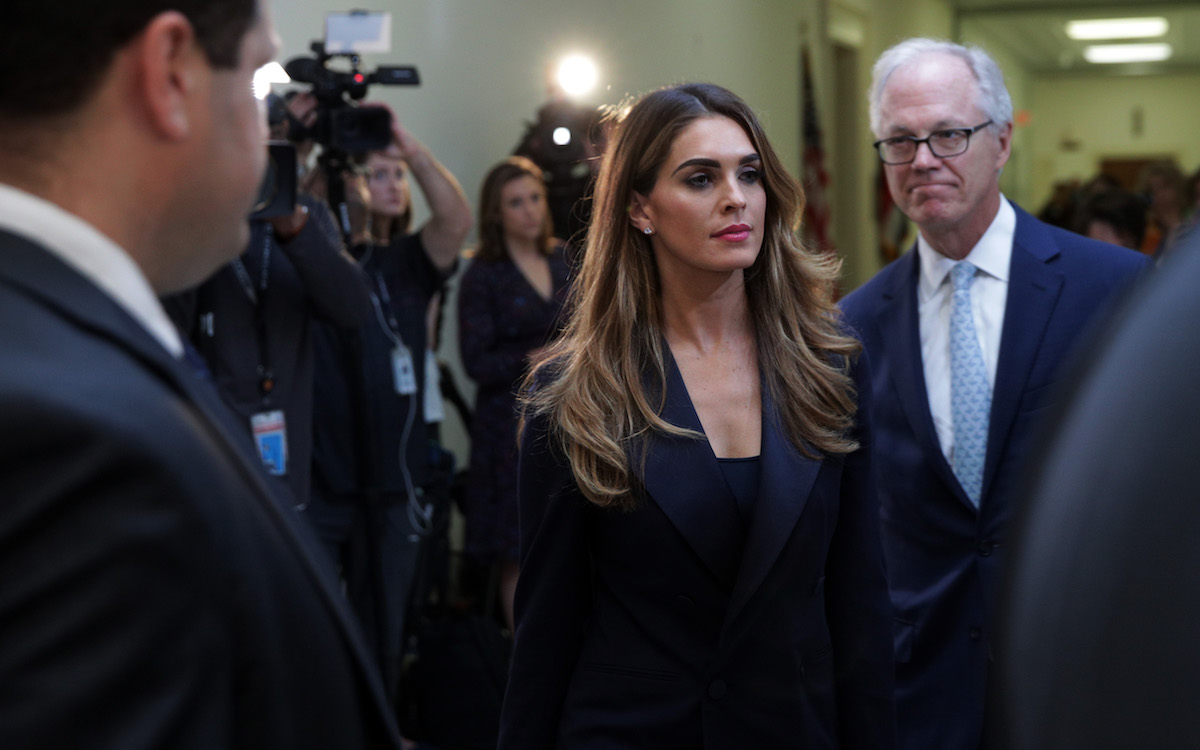 Hope Hicks testified in front of Congress today, and was reportedly asked about five specific instances described in the Mueller report having to do with potential obstruction of justice and hush money payments allegedly given to women after they say they had affairs with Donald Trump. I say reportedly because this was a closed-door hearing, though a transcript is supposed to be made public within 48 hours.

Last month, the former White House communications director was the subject of a bizarre New York Times profile, complete with a glamour shot of a header, debating the “existential question” of whether or not she should comply with the Congressional subpoena.

Hope Hicks, one of the best-known but least visible former members of President Trump’s White House staff, is facing an existential question: whether to comply with a congressional subpoena https://t.co/8NXpfQvxQL pic.twitter.com/L7aWVMsIdq

Why this was an existential question and not a legal one is anyone’s guess. But Hicks did manage to overcome her emotional demons and show up for the hearing. What a hero. Though, from the sound of it, showing up was the full extent of her cooperation. She brought with her a White House attorney “in order to preserve the president’s ability to assert executive privilege,” according to White House Counsel Pat Cipollone.

Nadler is “essentially implicitly implying there that it can’t be a privileged communication [between Hicks and Trump] if in fact what that conversation was about was the commission of a crime,” explains Rachel Maddow.

Still, that doesn’t appear to be stopping Hicks and her attorney form trying. According to people in the room where it happened, she refused to answer any questions at all. “Three House Judiciary Committee lawmakers exiting the closed-door interview said a White House lawyer repeatedly claimed Hicks had blanket immunity from discussing her time in the White House,” writes Politico. “They said she wouldn’t answer questions as basic as where she sat in the West Wing or whether she told the truth to Mueller.”

It’s not actually clear without the transcript if Hicks wanted to participate in this hearing. Rep. Pramila Jayapal called the hearing “a farce” and said that the lawyer cut Hicks off when she tried to answer a question about Trump’s former campaign manager Corey Lewandowski. So was the attorney there to act for her or to silence her? Both? Or is he meant to give the illusion of silencing her so she can continue to play out this existential crisis charade?

I am watching Obstruction of Justice in action, as @TheJusticeDept is objecting to everything that Hope Hicks wants to say during her tenure in the White House. The Administration’s position is absurd & they will lose in court.

What is the @realDonaldTrump Administration hiding? https://t.co/BqhkJJlbU5

This is what it’s like for the interview of Hope Hicks (questions modified but you’ll get the point):

Chair: Ms. Hicks, was it a sunny day on your first day of work?

Chair: Where was your office located?

Oh, apparently Lieu got Hicks to answer one whole question!

Excited I got Hope Hicks to answer one question about her tenure at the White House. I asked if on her first day, “was it a sunny day or a cloudy day?” You’ll need to wait for the transcript to see her answer b/c @GOP is mad I’m live tweeting the absurdity of absolute immunity. https://t.co/yfKQZRbXsL

Also, you can guess who’s not happy with these proceedings.

He does realize he’s the president, right? Not Hillary Clinton? And that it’s been that way for a few years now?

….33,000 Emails that Hillary and her lawyer deleted and acid washed AFTER GETTING A SUBPOENA FROM CONGRESS? That is real Obstruction that the Dems want no part of because their hearings are RIGGED and a disgrace to our Country!

Sigh. Well, I look forward to seeing just how many objections they manage to fit into this hearing when they release the transcript of all the nothing taking place today. And all the nothing that will probably be done in response.

Just asked Nancy Pelosi about WH saying Hope Hicks should not answer questions about her time at the WH, and she said: “Obstruction of justice.” And she walked to the elevator.