I wish to sip on cocktails from Gotham City 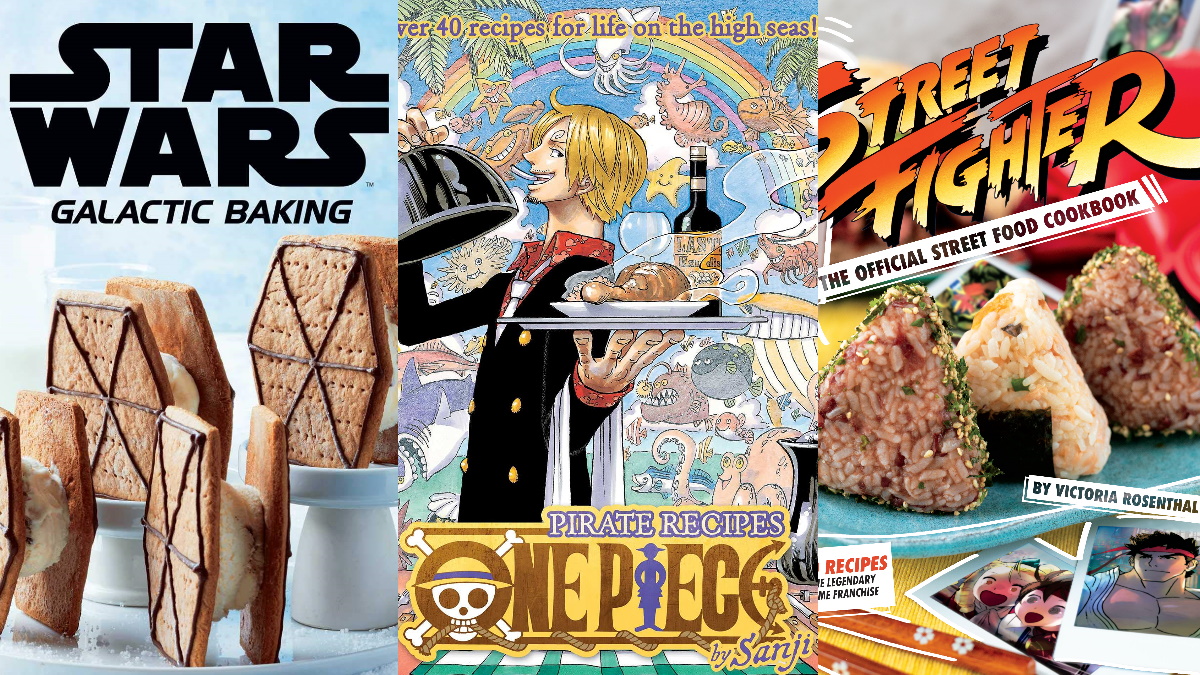 Much like the pizza delivery person who comes through when I’m in the middle of accidentally binge-watching an entire series (or playing Animal Crossing way past my bedtime), there is a level of respect that I have for the cook in the friend group who opens their home and, more importantly, their kitchen.

I don’t just mean holidays or birthdays or watching sports anime during the Super Bowl (my plan for next year), I mean that person who decides to make a pot of chili for everyone because it’s cold and chili is delicious.

There’s a bit of a variant to that friend, though, one who will come up with themed dishes depending on the occasion. They’re the ones making food look like fingers and eyeballs for Halloween, the ones who look at you and go, “Hey, we should eat chimichangas because we’re watching Deadpool,” and they just… have all the ingredients at the ready.

If you yourself are the person who would make katsudon because you’re watching Yuri!!! on Ice for the fifth time … call me.

While I know that the running gag in trying to find recipes online is the paragraphs you have to sift through about how the cook came up with the idea on a rainy day in the middle of April showers, what makes these particular books fun are those paragraphs before you get to the recipe (which are easily skippable if you’re so inclined).

That’s because they tell a story with the characters from the franchises in question. Whether it’s Street Fighter’s Sakura Kasugano traveling the world and grabbing a quick bite, or Deadpool giving solid advice like “have takeout menus on standby in case you mess up,” it’s fun seeing these books treated like a sort of “choose your own adventure” selection where you’re given a backstory for each dish via iconic characters or plot threads from their respective series. 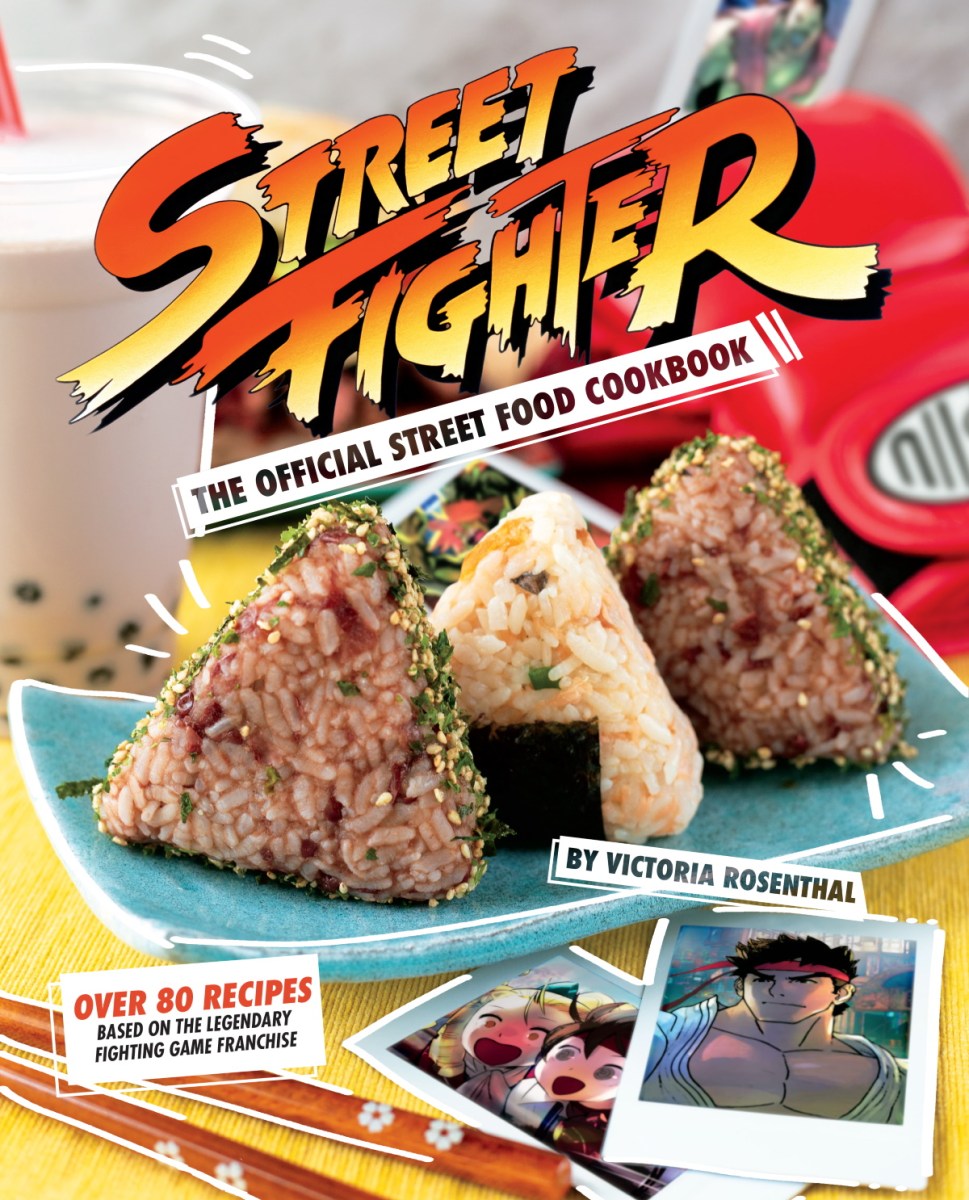 This was a book I was really excited about, not just because I’m a Street Fighter fan, but because it features dishes from all over the world since Street Fighter has always been a series that has you going from one country to the next. 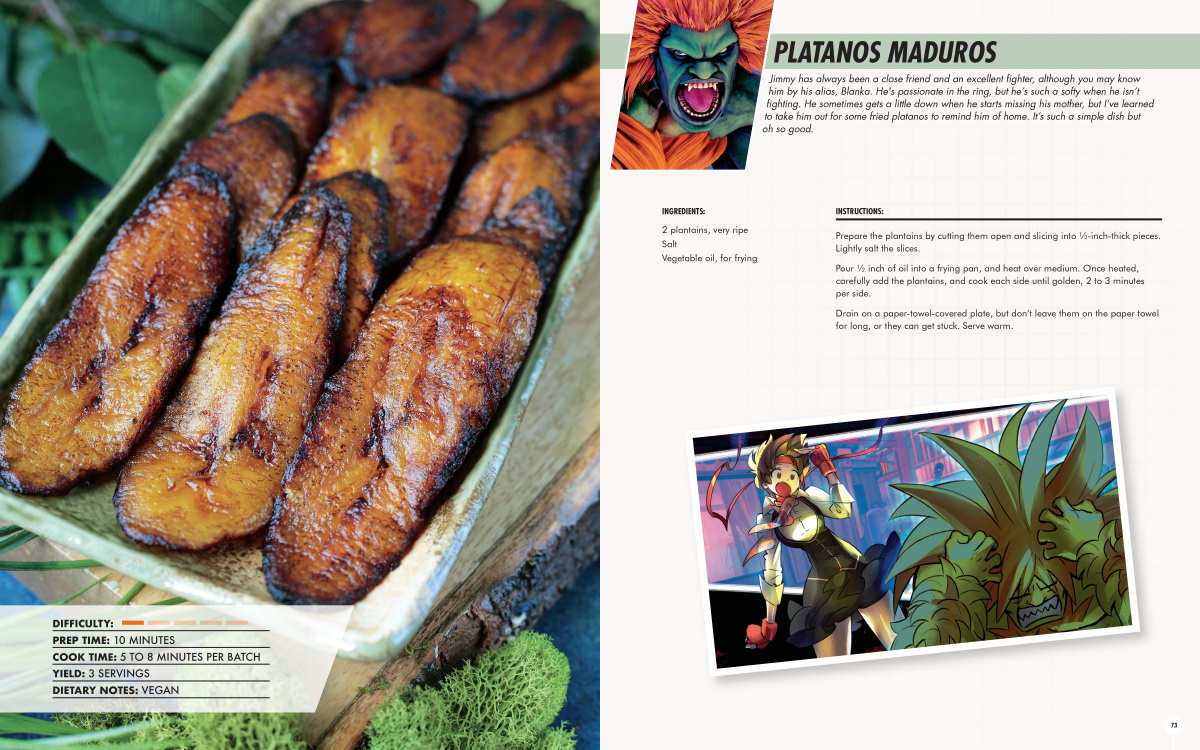 Sakura (a favorite of mine) acts as a guide, narrating the book as she tries dishes from different parts of the world depending on the character. Some continents have more recipes than others (Asia having the most since there are several characters from there) and, as to be expected, the dishes range in difficulty, but the book actually has a meter to let you know how hard it’ll be to pull off. 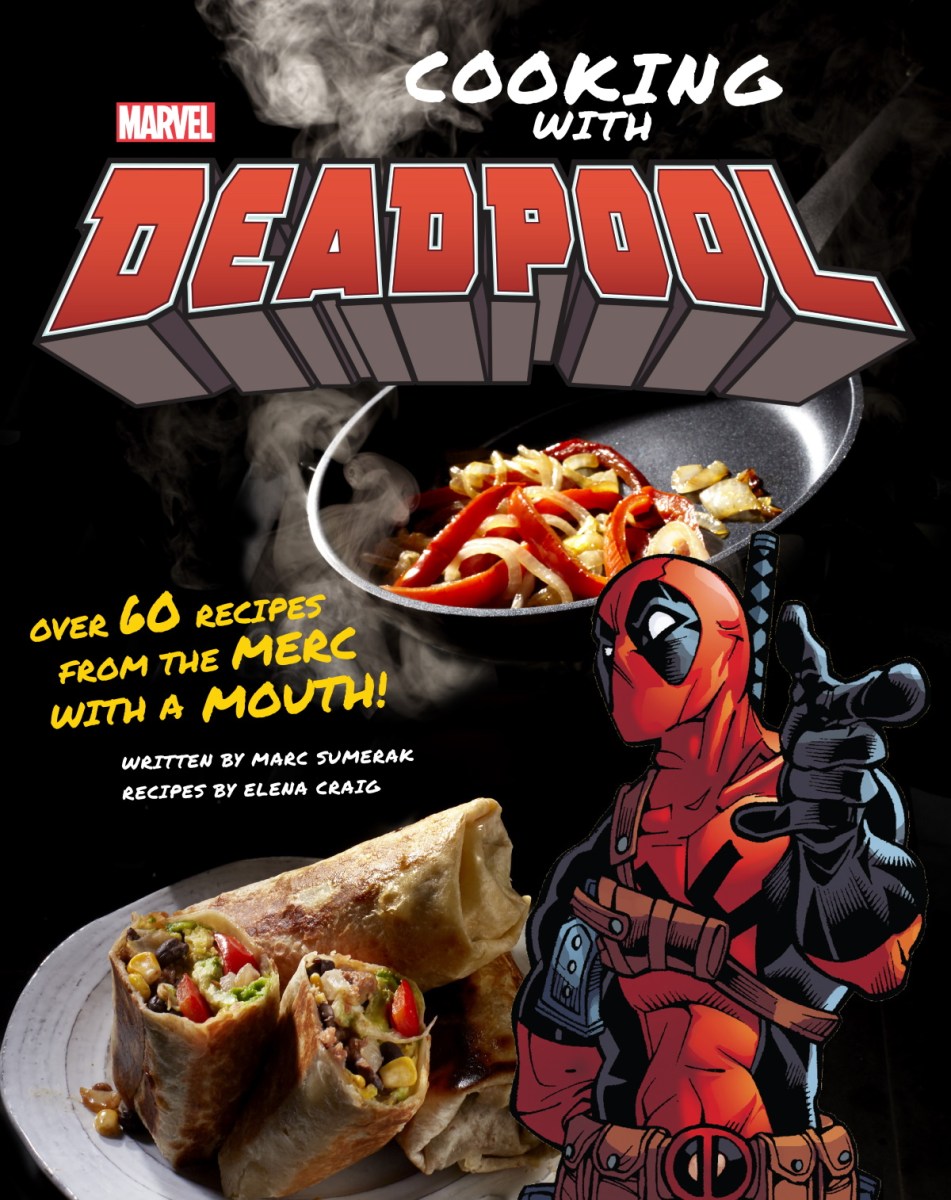 I’m pretty sure you don’t need me to tell you that this is the most self-aware cookbook you’ll see, so much so that there are multiple chimichangas recipes, oh, and it takes 80 pages to get to them. The book is full of Deadpool illustrations where he’s talking directly to you and dividing up the sections in a way that fits his personality (yes, the Maximum Effort section is for the bigger dishes like a whole ass ham). 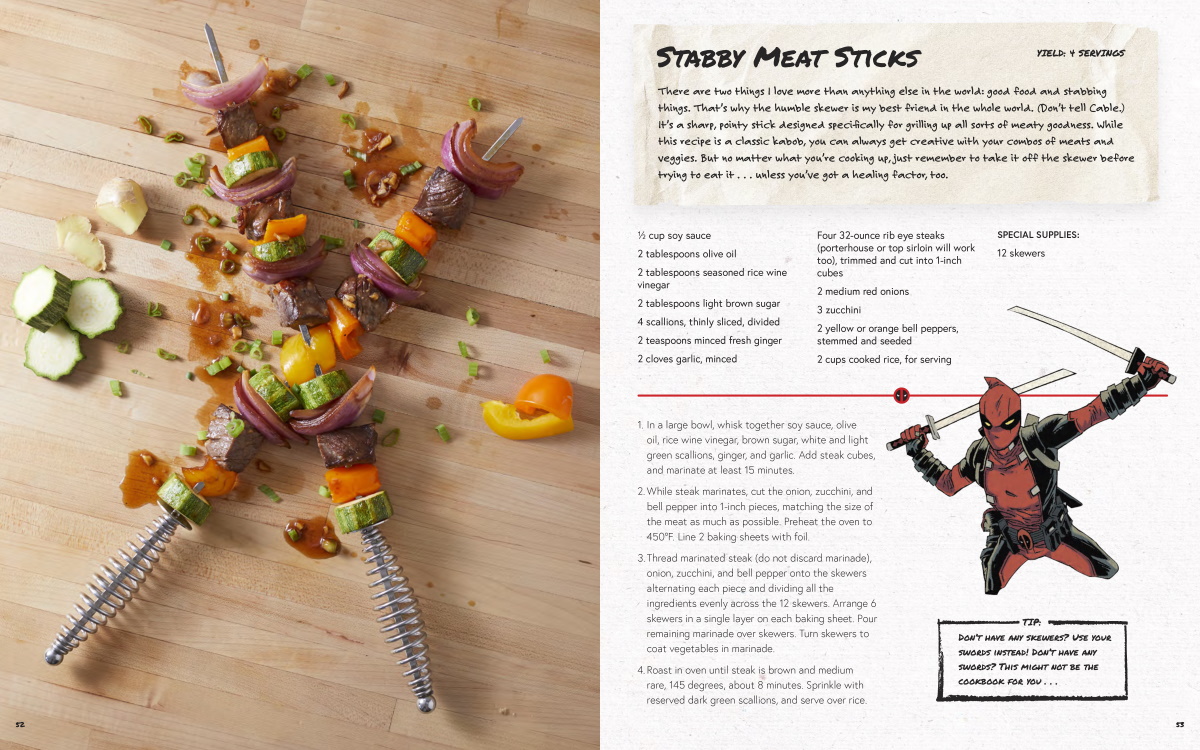 This book is also kinda sweet, as in, Deadpool comments on how you might get these recipes wrong, but that’s okay, you can just try another time. I wasn’t kidding about that takeout menu comment, there’s an entire page where the tip is to have your favorite place on speed dial in case things go wrong in the kitchen. 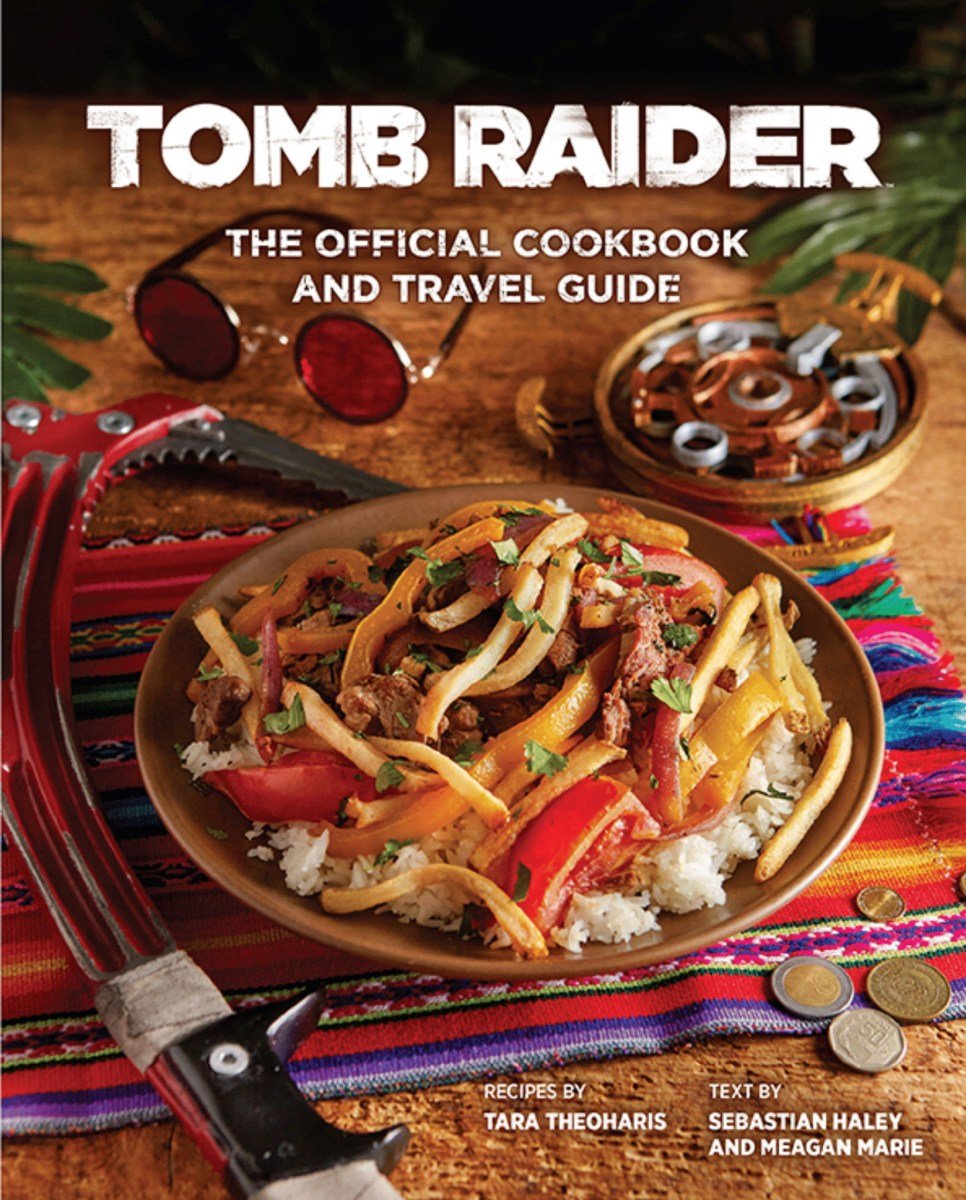 Since this is a book from the perspective of Lara Croft, who is known for her globetrotting (and two pistols, of course), there are a lot of recipes from outside the U.S. Much like the Street Fighter book, if you want to try making dishes from all around the world, this would be good to look into. 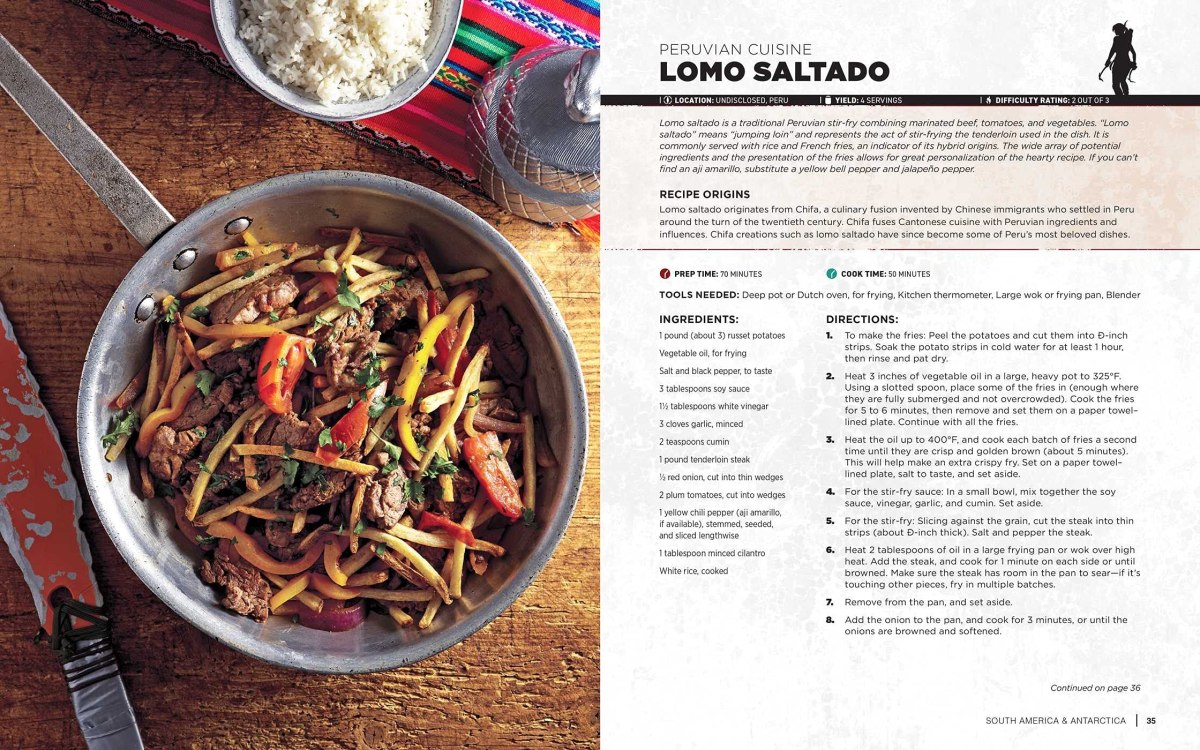 Along with the recipes comes information on each of the dishes, and by “information” I mean “origins” as each dish gets a section on where it came from. There are also travel guides for each of the continents Lara’s visiting in this book, in case the cook in your life also doubles as a history buff.

Star Wars: Galactic Baking: The Official Cookbook of Sweet and Savory Treats From Tatooine, Hoth, and Beyond 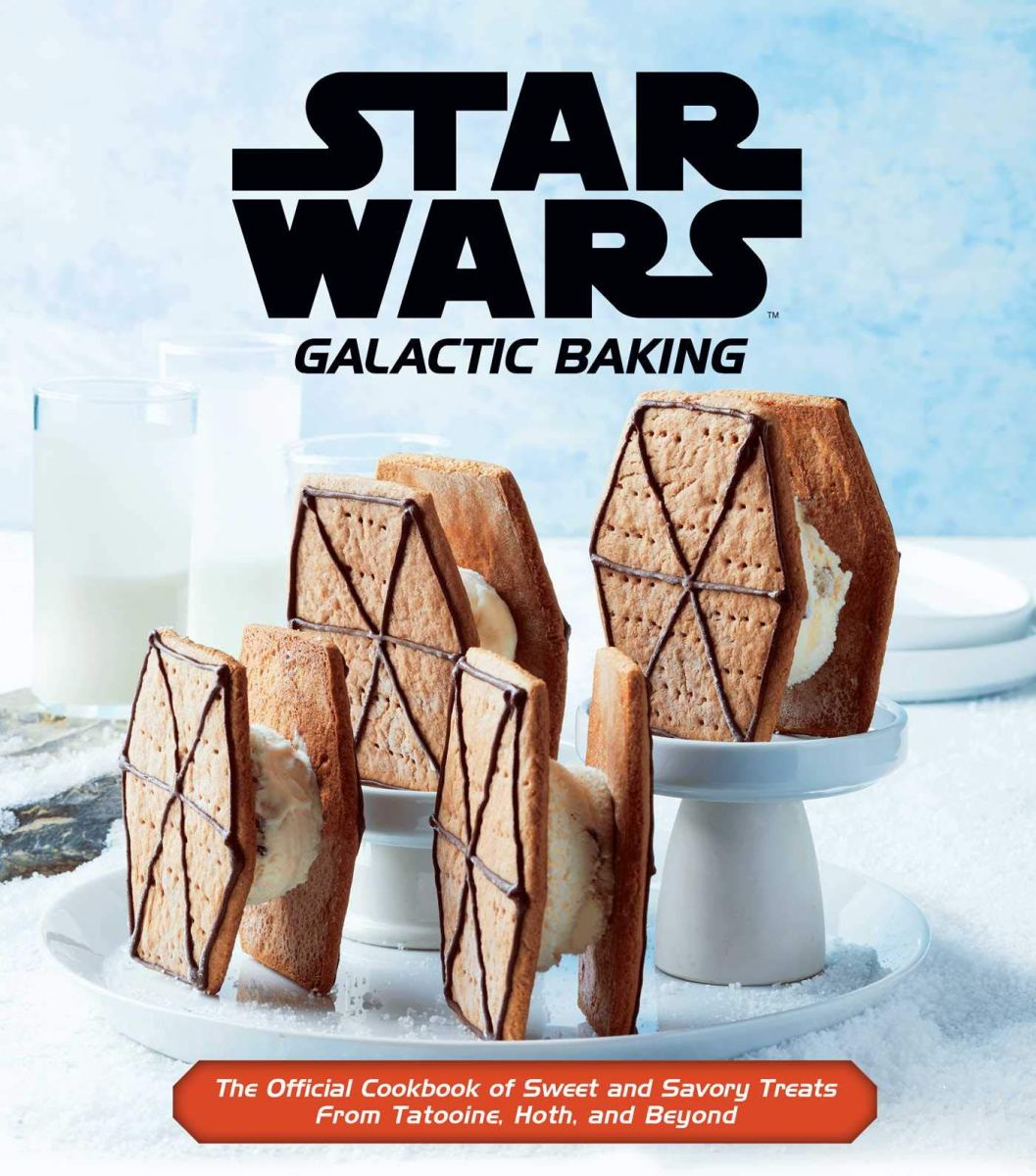 Admittedly, this is the book that intimidates me the most, as I am certainly no baker. But the thought of being able to eat Tie Fighter Ice Cream Sandwiches, Sith cookies, and Rancor Claws speaks to me. There isn’t really anyone serving as a galactic tour guide, but each recipe does have a section that gives a backstory on the treat you’re about to make in a galaxy far, far away. 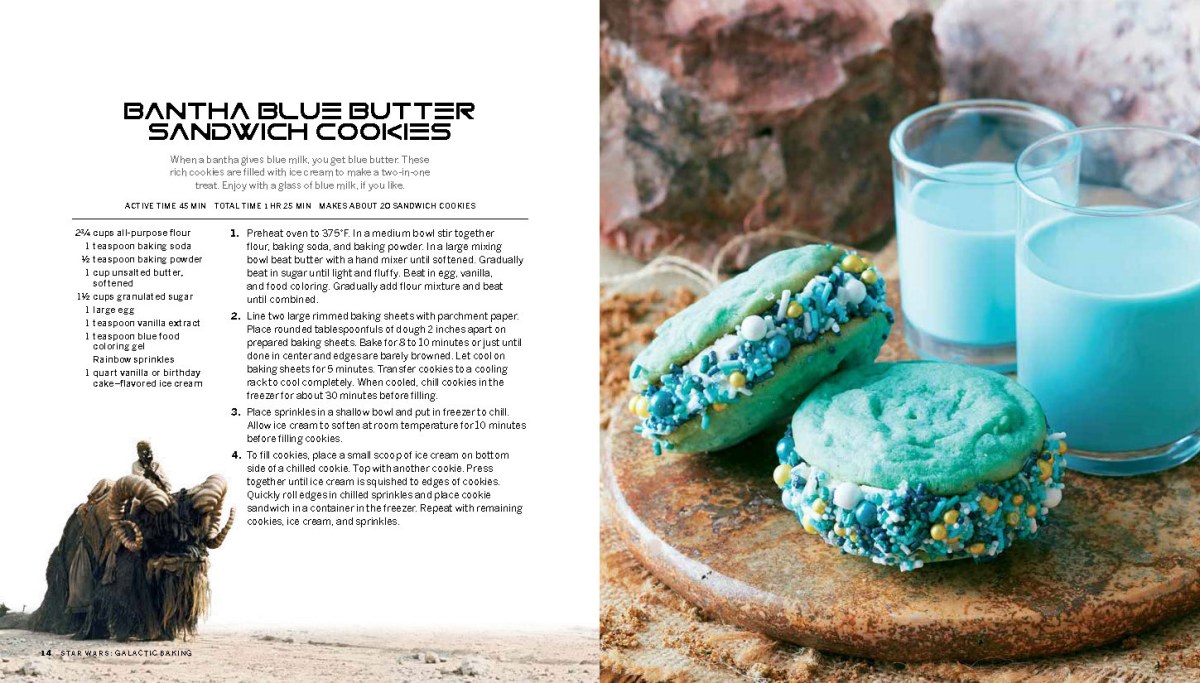 Instead of sections being divided by continents, they’re divided by the kind of world you’d see the food in. For instance, Green Worlds have dishes like the Forest of Endor Log Cake while Frozen Worlds have that Tie Fighter Ice Cream Sandwich I mentioned. The foods range from being themed to represent something from Star Wars (like the Tie Fighter Ice Cream Sandwich) or being a dish you’d probably eat on one of these many planets (like Bantha Blue Butter Sandwich Cookies which, yes, are blue like a bantha’s milk). 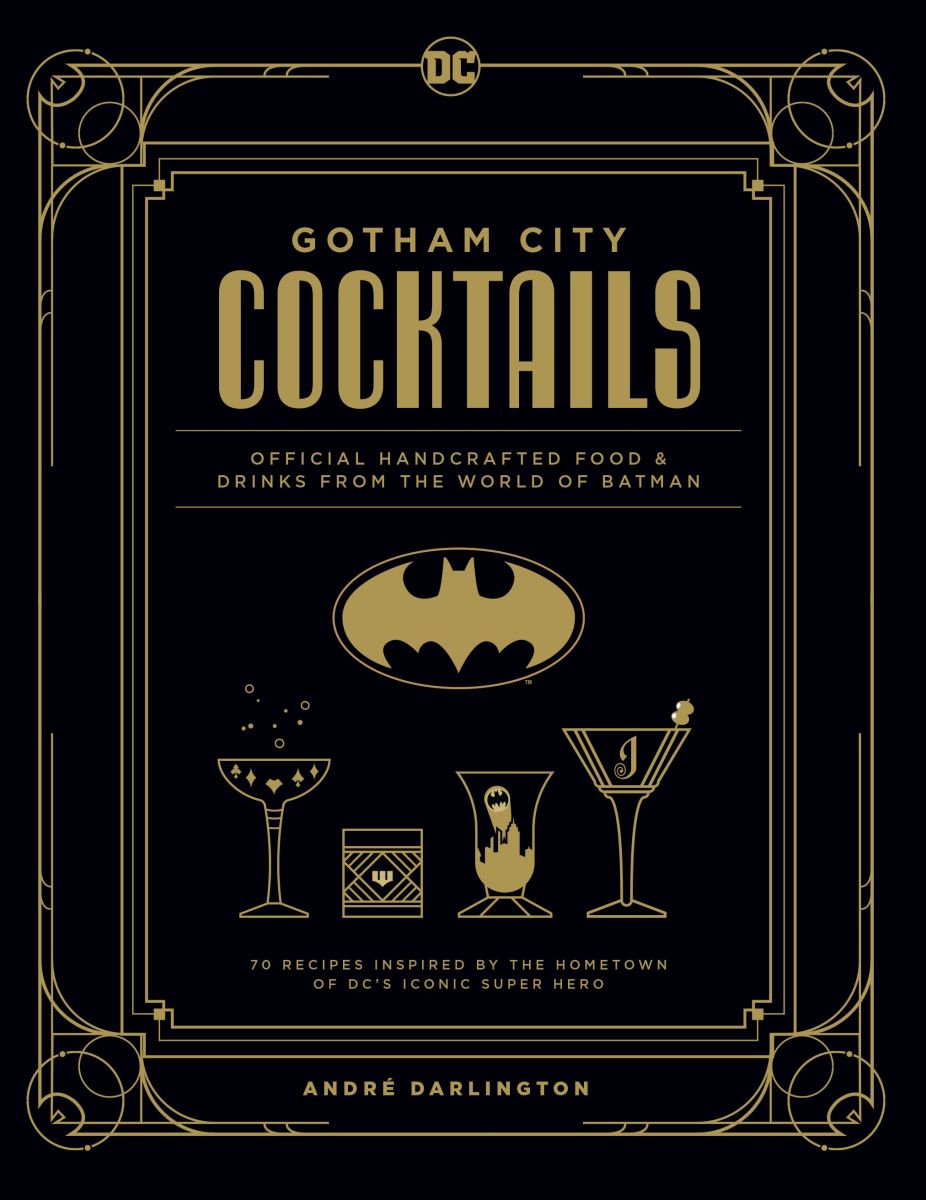 I don’t think I need to say much here. It’s a cocktail book. For Gotham City. A place where I’m pretty sure you have to be a little tipsy to survive.

Since the book takes place in one location (whereas the other books span all over the place), sections are divided up by the type of drink you can make. As someone who knows very little about alcohol (besides liking drinks that taste like candy), it’s helpful to see the breakdown between cocktails, punches, and, lol, there’s even a section for hangover cures. 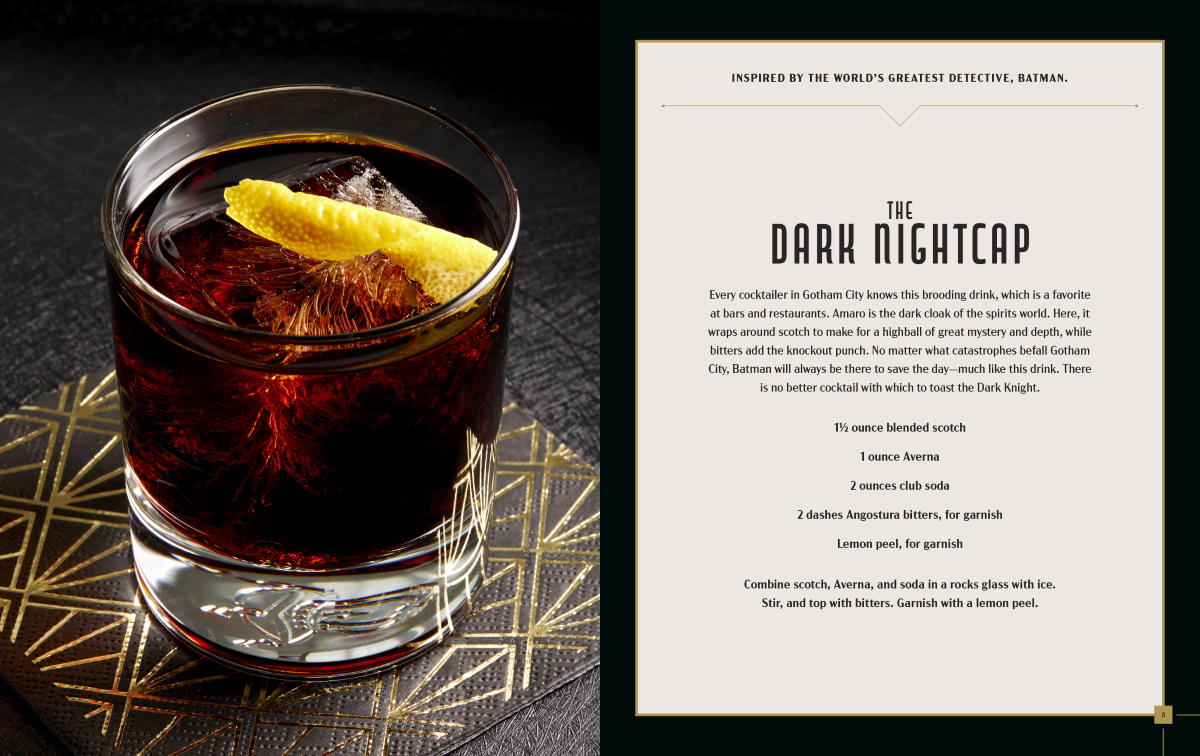 While there is technically a food section in the book, the main appeal is to make drinks for the citizens of Gotham… or yourself after a rough night of being vengeance and the night and all that. 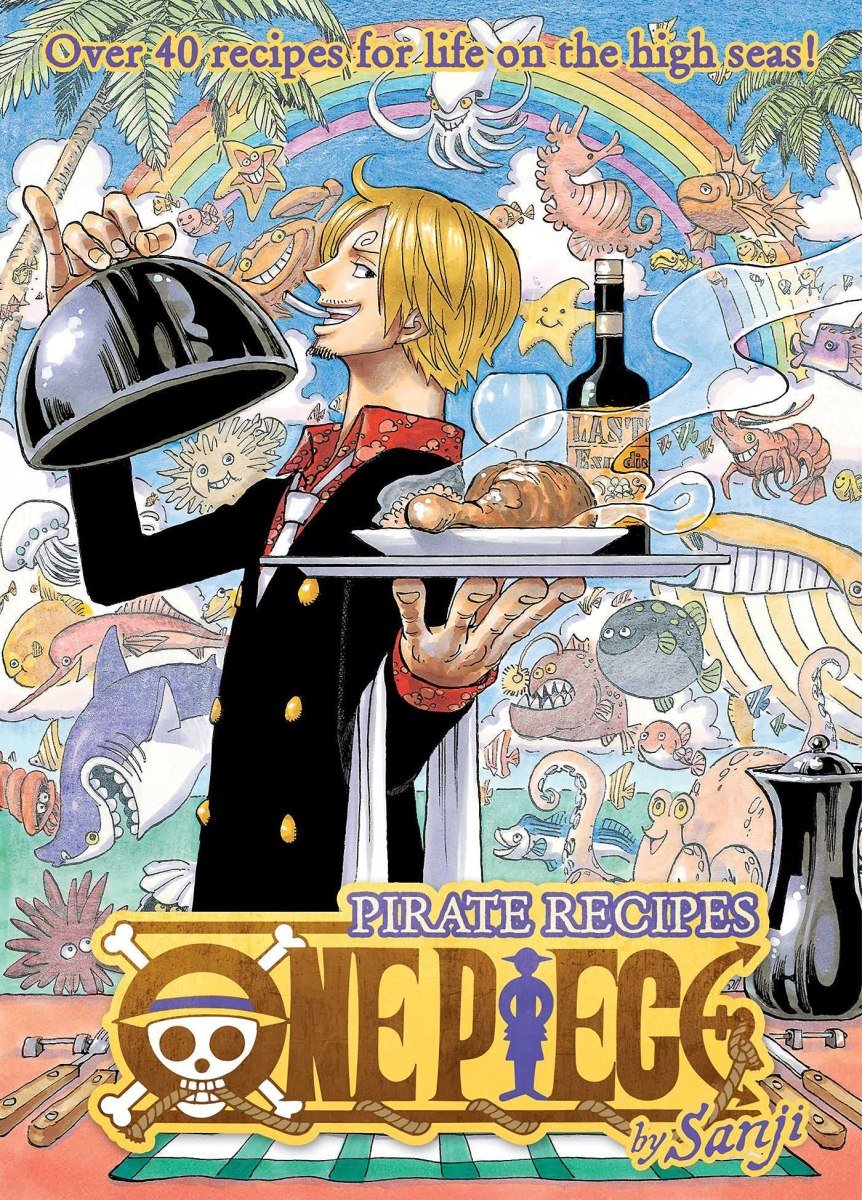 With One Piece celebrating 1000 episodes (PHEW!) I should’ve seen a cookbook coming, and as a relative newbie to the franchise, I am appalled that no one told me that there was so much food in this series! 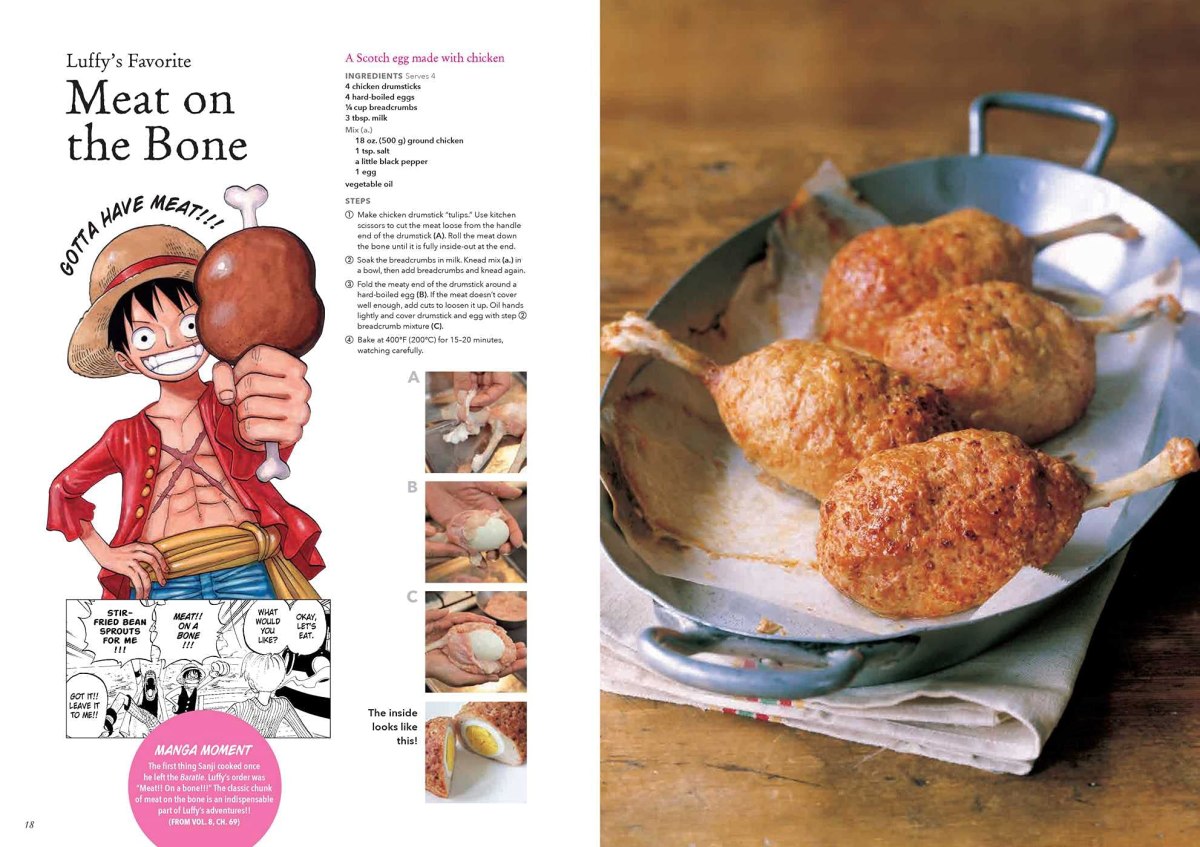 The book, written by Sanji (since he’s the cook for the Straw Hat Pirates) highlights a variety of foods that have either been seen in the series or mentioned. Of course, things like Grilled Giant Sandora Dragon don’t exist in real life, but the book finds real-world equivalents that you can treat as a monstrous beast (it’s basically a nice hunk of roast beef grilled in a pan). If you’re new to the series like me, you’ll appreciate the manga moments that are pointed to with each recipe (or, if you’re a fan, you’ll probably feel nostalgic about them).

Happy cooking to those who try these books out, and for those of us lucky enough to know someone who’d give these a whirl, we are truly living our best lives.