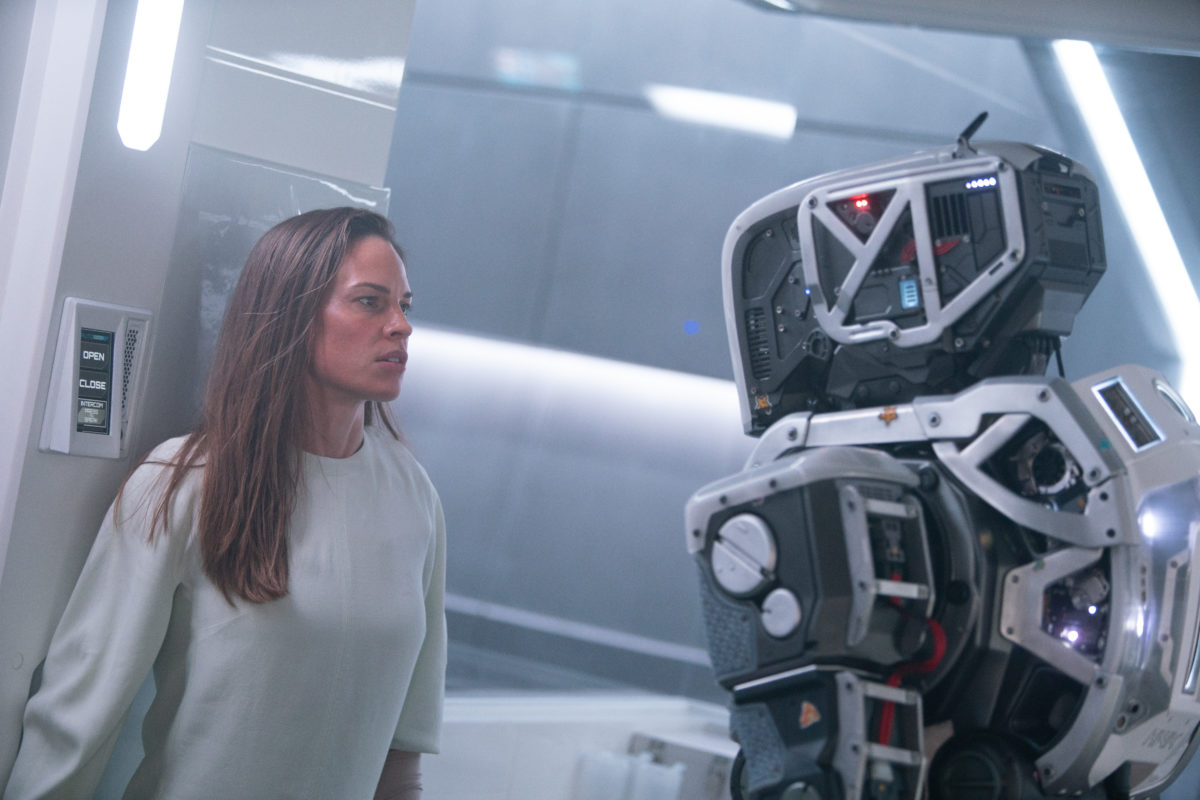 There have been countless films made about the complex relationship between mothers and daughters. Films about the power of parental love, about struggles for independence and self-sufficiency, and about the myriad dysfunctions that guide that first significant relationship. I Am Mother places that framework in a dystopian future, where a girl known only as Daughter (newcomer Clara Rugaard) is raised alone in a sprawling lab by a droid known as Mother (voiced by Rose Byrne, performed by Luke Hawker in a suit designed by the Weta Workshop).

Daughter is the only human on earth after a global extinction event wiped out humanity. She is lovingly raised by Mother, who trains her to lead the next wave of humanity, which currently resides as frozen embryos in the lab. But their relationship is threatened by the arrival of an injured stranger, Woman (Hilary Swank) and Daughter realizes that Mother may have been lying about the state of the world outside the lab.

I Am Mother, directed by Grant Sputore (in his feature film debut), is a refreshingly original sci-fi tale, and a rare one that centers on three women. The film has the claustrophobic feel of Alien, a comparison made all the more tangible by its low budget and reliance on practical special effects. The film asks deeper questions about morality, and the cost of building a better human race.

We sat down with Rugaard and Swank to discuss the film and how they created the intensity that fuels I Am Mother.

THE MARY SUE: What initially drew you to the project?

HILARY SWANK: I read so many scripts, and it’s super hard to find something original, there’s so much content out there and it’s always usually the same recycled stuff, so for me to see this original content was so refreshing, the idea of the world we’re living in right now, which is so polarized and, there’s no healthy debates anymore, it’s either one or the other, it’s black and white, there’s no grey.

So the idea of … creating the perfect human, to recreate morals and a more ethical world is probably something a lot of people have thought about. It’s super frightening, but the idea is, with A.I, is not so far fetched. A.I. is taking over, and is not too far in the future, the idea of A.I. running so many things, so there were a lot of thought-provoking ideas within it.

CLARA RUGAARD: For me, the script was jut a complete page-turner, and such interesting characters, and you just instantly want to be a part of telling that story.

TMS: I loved how the film juxtaposes questions of faith with questions of science, especially with the faith that Woman has. How do you think faith plays a role in the story?

HS: To me, people who persevere are the most inspiring. For someone to be in her position, to be living in a post-apocalyptic dystopian world, and to see and endure all the horrific things she’s seen … is astonishing. I can’t even imagine the strength and perseverance and grit that she embues and carries in her life. It was written that she has a lot of faith, and I think you would have to at some point, but where do you lose faith when the human race has been taken out? That’s part of what is so thought-provoking about the story, and her will to keep surviving, she’s a survivor at her core. I can’t imagine what she’s been through.

TMS: This film is really driven by practical effects. How did that change your performance, having a man in a suit to act opposite as opposed to a tennis ball and a green screen?

CR: It was fantastic. Luke Hawker is a very talented trained actor, and he was providing a brilliant performance inside the suit, so inevitably it just made my life so much easier and Hilary’s life so much easier! It was strange, it took some getting used to, but Luke just became Mother in this sort of weird way.

TMS: Did you have access to Rose Byrne’s audio during filming or was Hawker delivering the lines?

CR: He was delivering the lines, completely.

TMS: Hilary, you’ve built a career out of playing strong, resilient survivor characters. You must be seeking out challenging strong material, what’s that been like?

HS: I didn’t know that those were the choices I was making in my career until i looked back at the trajectory of those choices I’ve made, but what’s so great now is that I’m not only seeking them out: they’re coming to me. I’m getting offered these super incredible stories with grit and something to say, while also being entertaining. These women who, at their core, are just super strong and I love that. I lvoe strong people, no matter what gender, that persevere are the most inspiring.

TMS: Clara, what was it like working with Hilary?

CR: Just fantastic, it was such an inspiration working alongside her. She really took me under her wing, and she’s been in the industry a lot longer than I have. I would often find myself in scenes forgetting that I needed to provide a performance because I was just in awe of … observing her in action.

I Am Mother is streaming now on Netflix.