Idris Elba Reveals He & Tom Hiddleston Will Reprise Their Heimdall/Loki Roles In Avengers: Age of Ultron 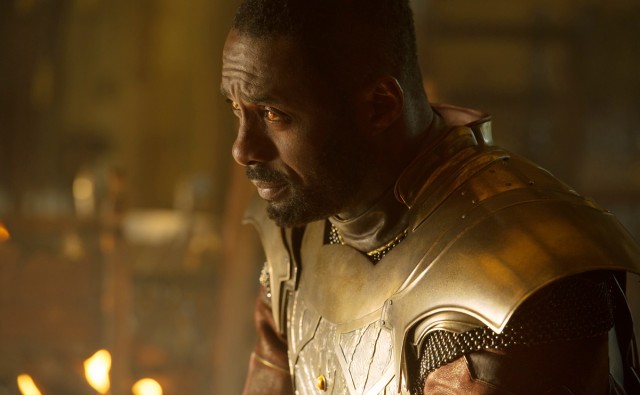 Idris Elba is just as excited about Avengers: Age of Ultron as we are, he just had to talk about it.

In an interview with The Telegraph, the Luther actor spoke of many things—his DJ work, traveling the world—but he also let slip a secret. Elba and Tom Hiddleston, who you may recall weren’t in the Avengers: Age of Ultron trailer (believe us, we looked), are indeed in the Joss Whedon film.

“Yesterday, Elba was sequestered outside London, on the hush-hush set of a huge fantasy movie he’s not supposed to talk about,” wrote The Telegraph… and then he went on to talk about it:

“Ironically, yesterday I had to…” Elba chuckles. He’s not meant to talk about this, but he clearly enjoys doing things he’s not meant to do. “I’m in Avengers,” he reveals. He means that his Thor character, deity-cum-sentry Heimdall, appears in Age of Ultron, the second installment of the superhero ensemble franchise. “And I’m doing a scene with Chris Hemsworth [who plays Thor] and Tom Hiddleston [Loki], and they’re like, [whispers] – ‘Aren’t you [meant to be] in Ibiza?’ ” That bassy chuckle again, followed by a frown. Elba came straight to Ibiza party-time from a mythical Norse god/Marvel universe that has made billions at the global box office. His head is all over the place. “That’s why I was p—– about my set yesterday. I really just wasn’t there. I was annoyed.”

But all is not glistening armor and hearty laughs in the superhero realm, apparently. Elba detailed the experience of going between his work on Mandela: Long Walk to Freedom and Thor 2: The Dark World:

Did it take him a while to shake off Mandela?

“Mmm. Yeah. I mean, I didn’t quite shake it off.” It seems he didn’t have the chance. “It was really weird,” he begins. “I’d just done eight months in South Africa. I came to England and the day I came back I had to do reshoots on Thor 2.” He raises an eyebrow. “And in the actual scene my hair was different, my…” He stops and gives an exasperated sigh. “I was like, ‘This is torture, man. I don’t want to do this.’ My agent said: ‘You have to, it’s part of the deal.’ ”

In the scene in question in the superhero movie, “I’m actually falling down from a spaceship, so they had to put me in harness in this green-screen studio. And in between takes I was stuck there, fake hair stuck on to my head with glue, this f—— helmet, while they reset. And I’m thinking: ‘24 hours ago, I was Mandela’. When I walked into the set the extras called me Madiba. I was literally walking in this man’s boots. [Within] six months, the crew, we were all so in love with this film we had made. I was him. I was Mandela, practically,” he insists.

“Then there I was, in this stupid harness, with this wig and this sword and these contact lenses. It ripped my heart out.”

But what’s up next? Perhaps that Warner Bros. King Arthur series Elba’s name was recently attached to along with his Pacific Rim co-star Charlie Hunnam?

“Rumour,” Elba says, his bassy, gravelly voice even lower in his chest than normal due to the fact that he’s flopped out horizontally on a couch.

“Massive rumour, from out of nowhere.” But, for sure, he would like to work again with the “amazing” Ritchie, who directed him in 2008’s RocknRolla.

And then he admits that he is in fact reading the script.