Hearthfire, the Next Skyrim Expansion, Releases on September 4th 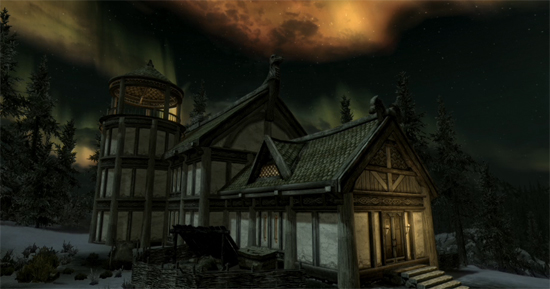 Good news, fans of role-playing games everywhere! Bethesda Game Studios has announced the second expansion coming to The Elder Scrolls V: Skyrim — and it is called Hearthfire. The newest expansion centers on building a home, upgrading said home, and all the trappings of domesticity. If this sounds suspiciously like they’re bolting The Sims onto Skyrim, that’s because it looks like they actually are bolting The Sims onto Skyrim. Those lucky Xbox 360 players will get to start building their own gardens on September 4th.

Some folks are displeased with what they’re calling a “glorified Sims” expansion. After all, Bethesda went on record saying that they were looking at making fewer but more meaty expansions with the game. Having an expansion slot taken up by an interesting, but mostly cosmetic, piece of content seems to be at cross-purposes with that in mind. Perhaps, however, there’s another reason in mind.

Bethesda has an exclusivity agreement with Microsoft; their first two expansions are required to be an Xbox exclusive for a set period of time. This had been originally stated as 30 days, but the longer the PlayStation 3 goes without receiving the previous Dawnguard DLC, the more it looks like some kind of other deal was ultimately reached. Strutting out a smaller expansion, like Hearthfire, might very well be a ploy to use up that second exclusivity agreement in order to avoid it later.

(Bethesda Game Studios via The Verge)