A Look at HD 10180, the Most Planet-Rich Solar System Discovered Outside Our Own 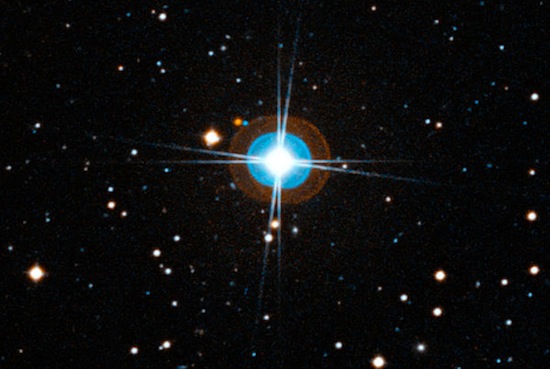 HD 10180 is a sun-like star 127 light-years away from our galaxy which, per the recent findings of the ESO 3.6 meter telescope in Chile, has at least five and possibly as many as seven planets in its orbit. Either number makes it the most planet-rich solar system yet discovered outside our own. This probably isn’t indicative of the totality of what’s out there, though: It’s more likely a function of the way that we detect other planets by measuring the wobble of the stars they orbit around.

In the past, it’s generally been easier to find a single giant, Jupiter-like planet orbiting around a star; according to the lead researcher of the study that uncovered HD 10180, the system’s discovery “highlights the fact that we are now entering a new era in exoplanet research – the study of complex planetary systems and not just of individual planets.” While there may be an Earth-sized planet in HD 10180, it’s probably lifeless, as the distance between it and its sun is one fiftieth of the distance between Earth and ours, and one of its years lasts little more than an Earth day.

Below, ESO’s animation of an artist’s impression of the system, which depicts the orbits of the five known planets in the system: