The Hawaiian Tsunami Was Amazing – If Only For The Science 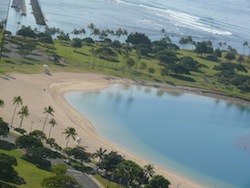 Within minutes of the earthquake just off of Chile’s coast early this morning, the US Geological Survey had it pegged – an 8+ on the Richter scale, ten times as strong as Haiti’s 7.0.

A short time later, the National Oceanic and Atmospheric Administration presented a map of expected energy distribution throughout the Pacific Ocean. In other words, where one could expect tsunamis. Hawaii, it appeared, was well within the danger zone.

The state moved into action, sounding tsunami warning alarms before sunrise, evacuating beaches and low-lying areas, sending boats out of harbors and into the open sea, where surges of high water posed no harm. KHON Fox 2 in Honolulu went on the air, exploring possible ramifications and providing updates.

Then someone put a camera in front of his TV, aimed it at KHON, and put it on Ustream.tv. At its peak, the stream had over 80,000 viewers.

KHON, based on the island of Oahu, northwest of Hawaii Island, couldn’t get cameras to the big island in time. They relied instead on Skype livestreams provided by, of all people, UFC fighter B. J. Penn. Penn provided some updates over the phone, as did the station’s sports reporter’s brother, who was also on Hawaii.

I, meanwhile, was sitting in a Lenscrafters at 45th and 5th in Manhattan, watching it all live on the Ustream iPhone app. Think about that. The progression of the nearly live feed went like this:

All because scientists could fairly accurately predict when the tsunami would arrive to Hawaii, allowing this structure to emerge organically as the day progressed.

And then, not much happened. Penn and others on Hawaii noted the ocean appeared to be discolored. There were later some slightly higher waves, but nothing detectable from the cameras that, necessarily, had to stay at a distance. The situation fizzled and faded; viewers of the live stream petered out, returning to the Olympics, or to checking email, or to waiting for their wives to finish their eye exams.

There was a great article on the New York magazine website which observed that, with the advent of the Internet, there’s been a shift in people’s engagement with the news. Long lead times and easy-to-use commentary tools mean that speculation in the run-up to an event can be nearly infinite, addressing every possible universe of events that will ensue from a newsworthy moment. Once that moment arrives, though, there’s only so much that can be said.

Today was a pure example of that phenomenon – the world was ready and watching for anything to happen to Hawaii. Then they got nothing – and that was the best-case scenario.