Review: The Hateful Eight Is Kind of a Drag | The Mary Sue

Review: The Hateful Eight Is Kind of a Drag 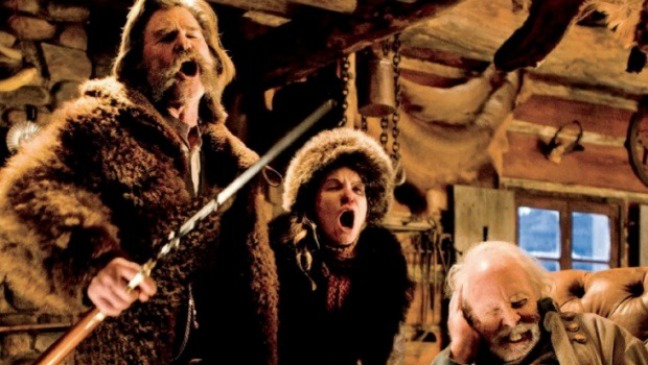 Another Tarantino movie, another opportunity for a lot of violence, profanity, and the N-word…and a lot of scenes which go on a little too long. The year’s worst trend seems to be the ongoing problem of movies outstaying their welcome; and especially guilty are some of our great, pretentious filmmakers. And this year’s winner of that title is most definitely Quentin Tarantino, who can’t seem to understand that even if bits and pieces work, simplicity and fine-tuning might have been better than throwing everything on screen and hoping some of it would work. At 2 hours and 47 minutes, The Hateful Eight is just entirely too damn long. In fact, when this movie went to intermission and I realize we had another half to watch…I was pretty furious that I was going to have to sit through another hour at least.

The problem is, there are elements about this movie which makes me feel like I could have enjoyed it (or enjoyed it more than I did) if it were simply shorter and edited with a sense of purpose. The movie absolutely looks great, and the score has that nice mix of nostalgia and originality. And while seeing it 70MM was nice, it seems more important to note that like Star Wars: The Force Awakens (a movie I did not feel was over long to its overall detriment), it was shot on film. The Hateful Eight has some of the most visually interesting moments in any Tarantino movie…which might have made a bigger impression if the movie didn’t crowd them out with lackluster ones. And the cast is for the most part, excellent and fit in as Tarantino players. Jennifer Jason Leigh and Walton Goggins seem especially well suited to his specific style of writing. And while I question a lot of Tarantino’s ideas personally, there is some commentary which I found at least interesting and at times truly thought-provoking…until they just keep repeating the same things over and over and over again, losing the larger message in the flood of Tarantino dialogue which now seems to be the crutch of an indulgent filmmaker…not the original voice who made such an impact on Hollywood 20 years ago.

The premise is simple (maybe a little too simple). Eight “villains” find themselves stuck together, first when four find their way onto the same coach, then in the same cabin. There are two bounty hunters, a former union soldier (Samuel L. Jackson) and sadist named The Hangman (Kurt Russell), Russell’s prisoner (Jennifer Jason Leigh), a new sheriff (Walton Goggins), an executioner (Tim Roth), a stranger (Michael Madsen), an old confederate soldier (Bruce Dern), and a Mexican cabin worker named Bob (Demian Bichir)…broad character types are big part of the western genre and the Tarantino delights in playing with them. There is also an ancillary character played by James Parks as the coach driver, who seems like a wasted opportunity considering the premise. And while I would assume this should have been a cameo surprise, Channing Tatum is credited on screen from the beginning…a credit which got laughs, but whose final appearance didn’t (another reason on screen credits aren’t always a good idea). Stuck together, all these villains start talking (and talking and talking) and there is some violence which breaks out among them. The recipient of this violence is most often Leigh’s outlaw prisoner Daisy at the hands of Kurt Russell (there are more than a few scenes of bonding over the body of a woman which made me think this isn’t commentary about misogyny, this is just feels like misogyny).

There are more than a few shootings on screen which are surprisingly violent, but never shocking or especially funny. There were some in the audience who seemed to be dying with laugher watching heads get blown off, but it never stuck me as humorous; just gratuitous. We’ve had a number of westerns out this year (and have one more before the end of the year). One of the funniest movies of the year (and my pick for best western of the year) was Slow West. But that film had moments which were truly shocking and allowed the violence to have an emotional impact on the characters and audience. We saw the same approach to violence in Tarantino’s Inglourious Basterds, which managed to have humor in the film, without sacrificing the impact of real violence and death. It is a challenging tonal balance to manage, but we have seen him manage it before. Instead, The Hateful Eight is always tongue firmly in cheek, and eventually, it gets a littler tiring as a viewer.

One of the problems with a movie this long taking that approach is once the overall premise of the film is set up, you feel like you know what is going to happen and the movie has a shocking lack of dramatic tension. And while I’m rarely a person who guesses outcomes during a movie, I surprised myself by predicting a lot of the plot. I didn’t read the script, but consider I knew what was coming this often, I can’t imagine people who did finding this movie very engaging. The other issue really are the underwritten characters. At a brisk pace these basic character types might have been engaging enough to move the film along, but Tarantino does little to make them more interesting or layered than they initially are. Even Walton Goggins (who is really great in the movie) feels like a familiar Tarantino character we would have seen from an earlier, better Tarantino movie. Even Tarantino’s own voice over feels like a joke about how predictable his movie dialogue has become.

But biggest issue is, these characters are, as we are told from the outset, all hateful…and they aren’t interesting or dynamic enough to overcome that fact. Just as in real-life, being around hateful, mean, cruel people can be an emotional drain. And by the time we were at intermission, I had felt the brain drain take its toll. I was exhausted by this movie in that soul-sucking way that makes you feel like you need a shower. And knowing I had at least an hour left made me realize this was going to be an endurance test to keep watching…and I needed some caffeine. So congratulations Tarantino! I did spend money at the concessions stand at a movie theater watching your movie. I guess you are saving the movie going experience…in the most passive aggressive way possible.