Harry Potter‘s Crabbe Arrested, Had a Bomb for the London Riots, Also Some Weed 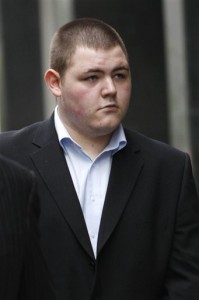 One half of the bullying Crabbe and Goyle duo is taking his mischief-making role way too seriously. Jamie Waylett, who played Vincent Crabbe in the Harry Potter movies, has been arrested on charges that he was in possession of a homemade bomb intended for use at the London riots earlier this year. Police also found a few marijuana plants in his home, which is probably not going to be too great for Waylett considering that he was arrested for that back in 2009. (Which was why Crabbe was nowhere to be seen in the last Harry Potter movie.)

Waylett, 22, was arrested in London while apparently “arming himself with a homemade ‘petrol bomb'” aka a Molotov Cocktail — even though Crabbe was probably terrible at Potions — during the looting of a store. This incident happened back in early August, but Waylett was only identified recently after police viewed hours and hours of surveillance footage taken during the riots. After his arrest on September 20, he was released after making a court appearance and will attend a “committal hearing” on November 10. Police have charged him with “violent disorder, having an article with intent to destroy or damage property, [and] receiving stolen goods” under the Criminal Damage Act.

But it doesn’t end there. Upon further investigation, police also found 15 marijuana plants being grown in Waylett’s home, so they also charged him with “cultivating cannabis plants.” Not knowing much about repeat offenses and the British justice system, this could spell even more trouble. In 2009, Waylett was arrested for possessing five bags of marijuana as well as growing 10 marijuana plants at home. He ended up serving 120 hours of community service, but lost his Harry Potter gig due to his bad behavior.

Harry Potter and the Deathly Hallowslaw