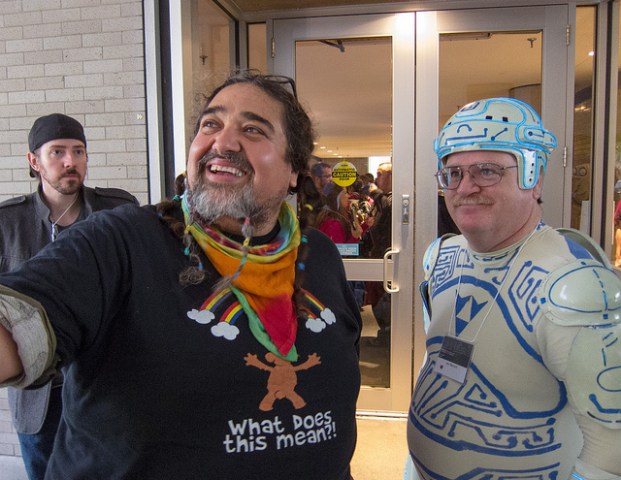 It was six years ago today that we denizens of the Internet were treated to one of the most genuine explosions of happiness ever recorded on film. Yosemitebear62 viewing a double rainbow across the sky.

The Daily Dot caught up with Yosemitebear62, whose real name is Paul “Bear” Vasquez, six years and over 42 Million views later to find out what he’s been up to since he became a viral sensation in 2010.

On what he’s been up to since he saw that double rainbow. Apparently, he still lives on his farm in Yosemite:

I’m sitting in the same exact spot I was when the Double Rainbow video started.

When the video went viral, I had been living as a starving artist, and I was doing it in a sustainable way. 99 percent exactly the same. … Everything that’s come has been just a bonus.

That “everything” includes the ad revenue he makes off of his YouTube channel, where he has over 43,000 subscribers, as well as spokesperson opportunities like starring in a Smart Water commercial with Jennifer Aniston. However, the video means more to him that

A lot of people in the beginning were like, ‘Enjoy your 15 minutes of fame,’ and I knew it wasn’t that. … This was something bigger. The whole thing was so I could give a message to humanity. None of it’s about me.

And despite the ads on his other videos, Double Rainbow will always stay ad-free:

The video is me understanding I’m in the presence of God. So it’s like the first video of God someone put on the Internet. You can’t put an ad on God.

A lot of people understand that I was marveling at the beauty and power of nature; that’s why it’s so popular. People connect to it on the deepest level.

As you go into the weekend this week, take the time to appreciate the beauty of what’s around you! Yes, we totally know the science behind a Double Rainbow, but how do they make you feel? Let that feeling marinate as you contemplate the awesomeness of the universe.

And then, you can dance to this:

Happy anniversary, Double Rainbow Guy! Thanks for sharing your joy with us!