From padawan to legend. 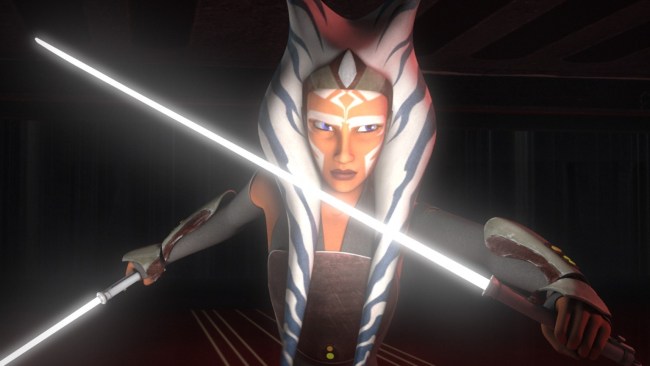 On this day, eleven years ago, Lucasfilm unveiled a new character named Ahsoka Tano. Voiced by Ashley Eckstein, the character was Anakin Skywalker’s padawan in the film and series The Clone Wars. Initially, the character attracted hate for “being a Mary Sue.” Now, she’s one of the most beloved characters in the Star Wars canon. Her journey from padawan to Jedi to spy to legend is the stuff of Star Wars history.

First and foremost, Ahsoka was the first female Force user to play a prominent role outside of the Expanded Universe books. While there were female Jedi in the background of the films, none of them had prominent speaking roles, and Leia had never really used the Force in a big way in the original film trilogy. Ahsoka meant something to a generation of young women who had dreamed of seeing a female Jedi playing a larger role in the story.

Naturally, she had her detractors. As part of the prequel era, she attracted hate just for existing, and as a spunky young teen, she drew vitriol for being a young woman with Force powers and a key role in the story. As a young character, she was supposed to be plucky, impulsive, and feisty; the fact that she didn’t just passively sit there and do as she was told frustrated some. Given the way the Star Wars fanbase treated existing characters like Padmé, and would treat Rey, Rose, and others, it sadly hasn’t changed that much.

But Ahsoka did not get written out of the show. Her growth was central to the series, an emotional through line building towards one of Star Wars‘ most heartwrenching moments. Ahsoka was beloved by the clones she fought with, and was definitely a daughter to Anakin. She had adventures on her own where she would save the day through smarts and courage, proving that she was every inch a Jedi.

And yet, she is no Jedi; she was framed for a crime she didn’t commit, and when her name was cleared, she left the Order and Anakin behind. Ahsoka’s decision set her on not only the path to surviving Order 66, but on the path to continuing to grow throughout the Star Wars universe.

She joined the Rebellion as a spy with the codename Fulcrum and helped fight the Empire, ultimately nearly giving her life to save Kanan and Ezra from Darth Vader in the second season of Star Wars Rebels. Thankfully, she reappeared in the show’s series finale, bound for another adventure.

Ahsoka is a survivor, through and through. She is a figure marked by compassion and courage, which makes her more of a true Jedi than the Order she left behind. She changes, struggles, and doesn’t always succeed but always keeps trying, despite loss and trauma. That is why she matters so much to so many people.

It’s important to have female characters who are allowed to experience the full spectrum of human emotion and existence. Ahsoka is not perfect. She can be frustrating and then later be inspiring. She can succeed in one episode, and then fail in the next. She is hard with her enemies, but compassionate to her friends.

Ahsoka matters to so many people in the Star Wars fandom. On her anniversary, let’s think about how important she’s become to the saga and what she means to the fans. Happy birthday, Ahsoka, and may we get many more of your adventures sooner rather than later.