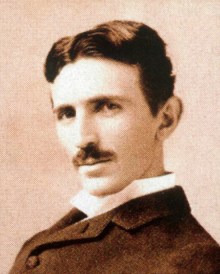 On July 10, 1856, Nikola Tesla was born in what is now modern day Croatia. He would go on to study electrical engineering and lay the groundwork for much of the technology that we take for granted in modern society. Alternating current, electric motors, radio, radar, and wireless energy transmission are just a few of the high water marks in his career. He was also best buddies with Mark Twain. Celebrated in his time, Tesla fell into relative obscurity after some failed grandiose projects and patent battles. He died in 1943 with little money to his name in a New York hotel room.

After falling out of popular history for a time, his prestige has increased in modern times. Tesla’s status as a wronged genius, with a dash of mad scientist thrown in, has grown his legacy substantially. His likeness has appeared in film, comics, and his name was adopted by the makers of the first electric roadster.

So raise a glass today to Nikola Tesla, the eccentric genius of the age!