Sean Hannity Getting Too Much Credit for Viral Vaccine Clips 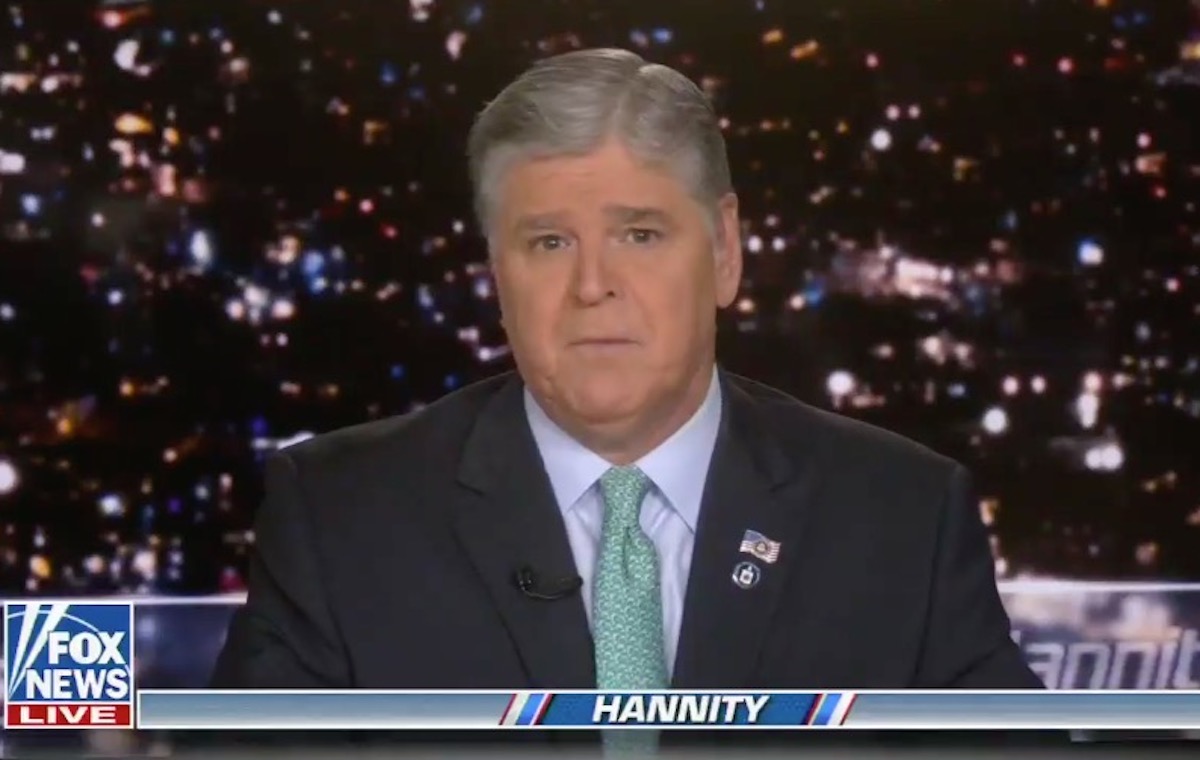 On his show Monday, Fox News’ Sean Hannity pleaded with his viewers to recognize the dangers of COVID-19. He begged his viewers to “please take Covid seriously.”

“I can’t say it enough,” Hannity told his audience. And while he didn’t explicitly tell his viewers to get vaccinated, he urged them to talk with their doctors about it and said, “I believe in the science of vaccination.”

The monologue was a hit, although tellingly, the people celebrating it were primarily not Fox News’ audience or its peers. The praise appeared to be coming mostly from more liberal circles who were ecstatic to see that one of the biggest names on the network dedicated to fearmongering and misinformation finally admitted he was wrong.

Except he didn’t admit he was wrong. Of course he didn’t.

A clip of Hannity’s monologue went viral online because out of context, it looks like Fox News is finally trying to get its viewers to accept science and trust the vaccine. But for actual Fox News viewers, Hannity’s message was bookended by more of the network’s big personalities yelling lies and spreading fear.

Here are some screenshots from the program after Sean Hannity’s viral vaccine monologue last night. pic.twitter.com/LgkVQqWaF8

It’s not even just other hosts who are still politicizing and the vaccine and vilifying those who support it. On Tuesday night, Hannity did a whole segment on Dr. Anthony Fauci, calling him “the left-wing, new green deal, socialist, most cherished public figure, long-time government doctor who is often wrong but never in doubt.”

And Hannity wonders why his viewers aren’t getting the vaccine!

Even worse, in that same episode Monday where Hannity delivered his vaccine plea, he also did a segment on how terrible it is some colleges and universities are mandating the COVID-19 vaccine for students, and even framed that mandate as a liberal agenda issue “with the approval of Joe Biden.”

In fact, Hannity’s viral “take the virus seriously” monologue wasn’t just in the same episode as his diatribe against universities wanting to protect students from COVID, it was right in the middle of the same segment. In the middle of his rant against vaccine mandates, calling them “terrible” and stoking fears that Democrats are for some reason trying to use the vaccine to harm young people, he took a brief break to encourage people to talk to their doctors, basically to see if the vaccine is right for them. Then he went right back to the fearmongering.

So you can see how context really does matter, and how Hannity’s plea might not have had anywhere near the same effect for Fox viewers as they did for those seeing just the short clip on their Twitter feed.

It’s not just Hannity who’s issuing mixed messages on the vaccine. As a network, Fox News is jumbled. Viewers see hosts like Tucker Carlson and Laura Ingraham straight-up saying the vaccine is ineffective, unnecessary, dangerous, and a liberal ploy to harm your children—and then the network has the nerve to run a 30-second PSA telling viewers to mask up, social distance, and get the vaccine because “we’re in this together.”

On Fox & Friends, host Steve Doocy tells viewers to get the shot because “it will save your life,” while his co-host Brian Kilmeade sits next to him and tells unvaccinated people they have the right to choose death.

Don’t get me wrong, I want Fox News to be airing these PSAs and I want Steve Doocy to tell viewers to get vaccinated. (I also want him to step on Kilmeade’s face but I don’t see that happening anything soon.) The viewers who watch those shows are clearly not listening to other sources or actual experts and they’re not going to. But it’s also incredibly naive to take a few viral clips and headlines at face value without looking at the network, and even the segments those clips come from, as a whole.

Mitch McConnell recently told reporters, “It never occurred to me that after three highly effective vaccines were developed in under a year that we’d have difficulty getting Americans to take the shot.” This is very weird, seeing as he spent the entire first year of the pandemic bowing to Donald Trump’s extreme politicization of the virus, surrounded by other Republican lawmakers set on doing the same.

I do not believe Mich McConnell’s actually surprised people are reluctant to get the vaccine after nearly his entire party spent the last 16 months or so telling them everything having to do with COVID is a political issue, just like I don’t believe Fox News doesn’t know it’s been dumping fuel on that exact same fire.

So yes, I want these people to be on the right side of the science and to encourage anyone who will listen to them to do the same. But it’s infuriating to see them pretend they’ve always been here.