Ladies Of YouTube: Hannah Hart on Booze, Books, and Being Happy (With Gifs!)

As a platform, YouTube has opened up new opportunities for filmmakers, writers, pop culture critics, and other creative talents to share their work with the world. For female creators, YouTube and internet culture has often been a double-edged sword, allowing them to bypass the usual gatekeepers but often exposing them to hateful feedback online and even harassment in real life. In this new series Ladies of YouTube, I sit down with writers, camera women, and prominent personalities to discuss their work as well as the advantages and disadvantages of YouTube culture.

With over a million subscribers, Hannah Hart is one of YouTube’s most recognizable (and adorable!) faces. In the past year, she has traveled the world and visited the White House to meet with President Obama, and this August, her new book My Drunk Kitchen: A Guide to Eating, Drinking, and Going with Your Gut will be available in bookstores across the country. She took a break in the midst of her recent travels in London to chat with The Mary Sue about meeting the President and her love of books and booze.

Rachel Kolb (TMS): By now, most people are familiar with the story of how My Drunk Kitchen first got started, but before all of that, what was your educational background, and what were you pursuing career-wise?

Hannah Hart (HH): I started out with a career in translation! I studied English Literature and Japanese Language over at UC Berkeley and after college moved from San Francisco to New York City to work part-time at a corporate translation firm. I was a proofreader! Basically, it was like looking through stacks of manuals and making sure there were no typos that could lead to someone accidentally breaking their washing machine…

TMS: Did you have any background in video production, writing, or performing for an audience (theater, speech team, etc.)?

HH: Nope! Unless you count hosting the talent show in grammar school!

TMS: Who were some of your influences in developing your show and on-screen persona when you were first starting out?

HH: Honestly, I think my influences were really just people I admired for their business around brand-building. My hero was John Green… and, frankly, still is!

TMS: What sort of a camera/lighting set-up did you have in your early videos, and how does that compare to now?

HH: I recorded my first “season” of MDK using a webcam on laptop! I used to stack it on a bunch of books… I think I have a picture of that somewhere. I can send it to you! [She did send the picture:] 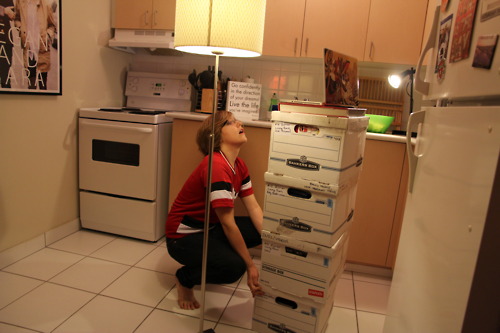 In terms of lighting…. I used lamps? Today, I have a Canon 60D and a tripod… but lighting remains the bane of my existence.

TMS: In the years since My Drunk Kitchen first began, production values for videos on YouTube have gone up considerably, and viewers expect a more polished look. Do you think these high standards will prevent an aspiring YouTuber who might not have media production experience from finding an audience, or can a strong personality and original voice succeed despite amateur production values?

HH: Not at all! Not even a little bit. There are so many affordable “prosumer” (producer/consumer) products out there and the internet is an endless information superhighway, right? I think what matters most is consistency and authenticity… If you don’t enjoy making online videos… then you probably shouldn’t do it.

Also, you know what they say…it’s not about resources, it’s about being resourceful!

TMS: As a performer and YouTube personality, you have branched out quite a bit in the last year with your new book and projects like Camp Takota. Can you talk about the balance of a YouTuber giving their audience what is familiar while exploring new creative outlets and projects for yourself?

HH: Finding balance is hard! Also change is scary. Fortunately though, I have a great and supportive online community who has had my back all this time. I feel deeply blessed and grateful.

TMS: You have had the opportunity to travel around the world, collaborate with people like Mary Louise Parker, and meet with President Obama. What experience has been the most rewarding for you personally, and if there was one experience you could go back and live through again, what would it be and why?

I never imagined that something like that would happen to me… and it was really inspiring to be in the same room as a man who (I believe) still believes in this country. As a “reasonable optimist,” I sometimes worry about what is realistic progress for the US… Taking that meeting really showed me that a not only are we (hopefully!) heading in the right direction, but that the systems of power in place are shifting as well.

TMS: After your coverage of your meeting with President Obama and your thoughts on the new healthcare law, you received quite a bit of backlash, which you also discussed on your channel. Did the experience make you more wary about bringing your personal beliefs and politics into videos on your channel (stick to food and booze), or did it inspire you to speak out more on issues that matter to you, controversial or not?

HH: As an openly gay lady on the internet, I worry sometimes about harassment and what-not… but I do like to promote facts. For example facts like:

TMS: If you could change one thing about the YouTube community, whether among viewership or among creators, what would it be?

HH: I would change… Well, I wouldn’t change anything, really. I would just encourage people to check themselves and make sure that they are doing online content for the right reasons. I think some people see YouTube as a platform to “get famous,” and I personally don’t see “fame” as rewarding end goal. Attention isn’t everlasting. Also, remember that Leonardo DiCaprio doesn’t quit acting every time he is snubbed by the Oscars!

TMS: What is the biggest misconception that people have about your work as a YouTube creator?

HH: Ha! That we’re lazy. Couldn’t be further from the truth. In reality, we are all workaholics. Our lives are our jobs are our lives!

TMS: What other YouTube channels do you watch, and are there any that you think deserve a bigger audience?

HH: Honestly, I don’t watch that much online because it’s “work” for me. When I want to relax, I really like to watch films or BBC shows.

TMS: What can fans expect to see from you in the coming year? (More cross-overs, tours, guest stars?) 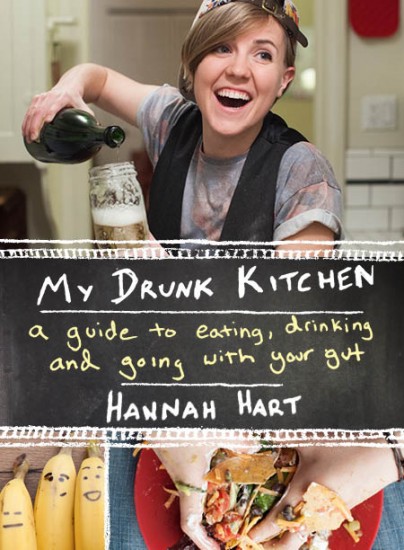 Jamie Oliver and I cooked the first original recipe together. I will be releasing that episode this summer!

Also, I just uploaded a new song to the internets… It’s a song about pajamas, dedicated to my beloved Carrot Onesie.

TMS: What do you hope people take away from your show and from your story of success?

HH: Story of success! You flatter me, madam!

And in terms of a “take away”… I just genuinely want people to be happy and take care of themselves. I want us all to be good to each other and follow our hartos.

TMS: If you woke up tomorrow and YouTube didn’t exist anymore, where would you put your creative energies? (Writing, another form of new media, etc.)

HH: BOOKS BOOKS BOOKS! I love books. I want to write many and multiple.

TMS: Outside of the show, what is your late-night drunk food of choice?

HH: Leftovers, primarily… Is there anything quite as satisfying as cold pasta after a long night out?

Pre-order is available for Hannah Hart’s book My Drunk Kitchen: A Guide to Eating, Drinking, and Going with Your Gut at hannahhart.com/book. Her new song “Ur the 1z” is available for download on iTunes and Bandcamp. You can see My Drunk Kitchen and HELLO, HARTO!, plus collaboration videos at more on her YouTube channel. She can be found on Twitter @harto.