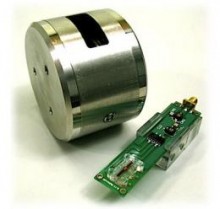 Researchers at Harvard and MIT have announced the development of a cancer-scanning device that is much smaller, faster, and cheaper than what’s currently on the market, and it’s been 96% accurate in its diagnoses in tests conducted so far.

Whereas the most prevalent current procedure for cancer testing involves extracting a cell sample and sending it to a lab for testing, a process which can take several days and has an accuracy of an estimated 84%, according to Bloomberg, this handheld device uses a technology known as nuclear magnetic resonance to identify tumors. The raw data extracted is then fed into a smartphone app to determine results.

Dr Ralph Weissleder of the Massachusetts General Hospital in Boston and colleagues have developed a miniaturized nuclear magnetic resonance (NMR) scanner that identifies molecules by the way their nuclei are affected by magnetic fields. It also attaches magnetic nanoparticles to proteins to allow specific proteins, such as those found in tumor cells, to be identified.

The gadget was tested on suspicious cells collected by fine needle aspiration from 50 patients. Because the samples needed are so small, cells could be taken from several areas of the suspected tumor. The samples were labeled with magnetic nanoparticles and then injected into the micro-NMR machine.

The results can be read by connecting the device to a smartphone loaded with a specially-programmed application. The samples tested revealed nine protein markers for cancer cells. When the results for four of these proteins were combined they allowed the team to produce a diagnosis.

Key to the heightened accuracy is not only the method used, but the smaller size of the sampling, which allows doctors to test cells “at several sites” in a suspected tumor. A co-author of the study testing the new device says that “This is superior to even the pathologists … But it is still experimental and must prove itself.”