This Hella Old Book of Spells Has Finally Been Deciphered 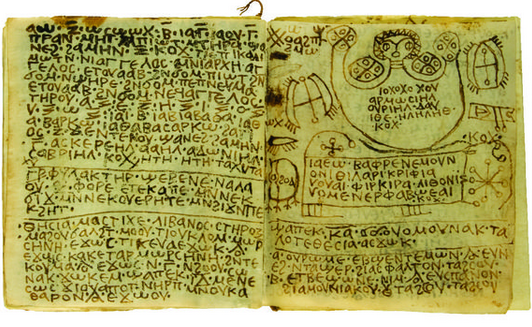 A 1,300 year old Egyptian text of mysterious origins, deemed “The Handbook of Ritual Power” by researchers and invoking an unknown deity addressed as “Baktiotha: lord over the nine kinds of serpents,” has finally been translated. Woe upon us all.

Professors Malcolm Choat and Iain Gardner explain in their recently-released book A Coptic Handbook of Ritual Power that the artifact is “a complete 20-page parchment codex, containing the handbook of a ritual practitioner.” The codex “starts with a lengthy series of invocations that culminate with drawings and words of power […] These are followed by a number of prescriptions or spells to cure possession by spirits and various ailments, or to bring success in love and business.”

Written in Coptic (a variety of ancient Egyptian and the liturgical language of the Coptic Church), the book is just full of simple life-hacks. For example, to punish one’s enemy, a practitioner need merely say an incantation over a pair of nails then “drive them into his doorpost, one on the right side and one on the left!”

Choat told LiveScience in an e mail that the book’s secrets may not have been reserved for members of the clergy: “It is my sense that there were ritual practitioners outside the ranks of the clergy and monks, but exactly who they were is shielded from us by the fact that people didn’t really want to be labeled as a “magician.”‘

Although some of the language implies the Handbook was intended for use by a man, Choat says, “That wouldn’t have stopped a female ritual practitioner from using the text, of course.”