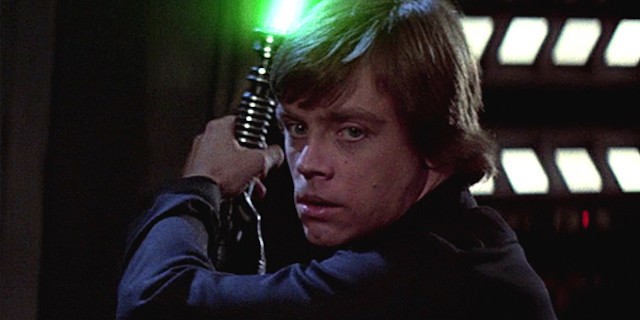 Mark Hamill, AKA Luke Skywalker himself, has been even more tight-lipped about Star Wars: The Force Awakens than its typically secretive director. That has to be tough with a relatively active Twitter presence, and now the actor has made what may come as a spoilery tweet to some, but that probably has more to do with our Ep VII hype than actual spoilers.

Still, read at your own risk, those of you who want to avoid any … unwelcome surprises.

Hamill mentioned an Episode VIII return for himself in a recent tweet, and it came as a surprise to many fans:

If that caught you off guard considering all the secrecy around Luke’s whereabouts in The Force Awakens, you may be blinded by the shining light of the movie’s fast-approaching premiere—or perhaps a desire to avoid spoilers at all costs. Why? Episode VIII has already begun shooting despite people paying much less attention to it than the drone-hounded Episode VII, and Hamill’s already been spotted on his downtime during the shoot.

Still, it was widely reported as a spoiler, which likely means plenty of Hamill’s followers were spoiled by the tweet, even if the information was available to them elsewhere. Did he just not realize his appearance in the sequel wasn’t common knowledge? Did he think his fans would’ve already searched their feelings and known it to be true? Did he have too much faith in his Twitter followers to already be on top of the news on their own?

Probably, on that last one, considering the response to the back-and-forth between him and Episode VIII director Rian Johnson:

Sorry to spoil your “spoilers”, but the Press widely reported my return to Skellig w/ @rianjohnson for SW shoot. My lips remain sealed. #shh

@HamillHimself Dude, don’t @ me, we don’t even KNOW each other.

My bad. Mistook you for the actual talented writer/director who shares your name. Will never @ you again #NonEntity https://t.co/22mLlni4rr

I’ve gotten a bunch of replies like this, so I guess I should clarify that I was kidding. https://t.co/kcQNU9VAK6

But really, is anyone shocked that Hamill will be back for the sequel? Even if he dies in The Force Awakens, it’d be weirder for him not to come back as a Jedi ghost for the sequel than to make an appearance. Heck, he could already be dead when The Force Awakens starts and still appear in the entire trilogy, so we know as much about VII‘s plot now as before Hamill’s tweet—even those of us who had been too preoccupied planning our ideal premiere night for the upcoming sequel to have heard anything about the one after it yet.

Still, there are those who don’t want to know anything at all and follow Hamill just for his winning personality (and the crushing revelation that Dagobah isn’t real—the question there was where it was filmed, but the poor, disillusioned soul deleted it and has probably turned to the dark side). What about you? Does this tweet spoil the experience for you?